Five years ago, Damon Gameau did a Morgan Spurlock (Super Size Me) on the sugar industry, fattening himself up on sugar-rich “healthy” foods and documenting the physical consequences for That Sugar Film. In his latest documentary, 2040, he’s like a chirpy version of Al Gore, insisting there’s a silver lining inside the cloud of climate angst enveloping the planet.

Throughout the film, Gameau addresses his four-year-old daughter, Velvet, trying to imagine a bright future for her, one where the effects of climate change have been reversed. But it’s clear from the quirky, upbeat tone of the film that he’s also addressing the current generation of high-school students.

He gets the nasty stuff out of the way at the beginning. The planet is heating up, he admits. It hasn’t changed this rapidly in 50 million years. Oceans are now 30 percent more acidic than they were 150 years ago and marine life is suffering.

But, hey, it’s not all doom and gloom – here’s what we can do about it, he says. Here’s what people are doing.

Gameau visits a village in Bangladesh where a microgrid of solar panels has brought energy and increased wealth to a local community, now able to buy and sell electrical power directly from (or to) their neighbours.

He looks at marine permaculture, where trays of seaweed are lowered into the ocean, creating nutrient-rich environments for marine life, absorbing carbon from the atmosphere as they grow, and providing healthy food and fertiliser when they are harvested.

He looks at driverless cars and imagines what could be done with inner-city carparks if car ownership became a thing of the past. 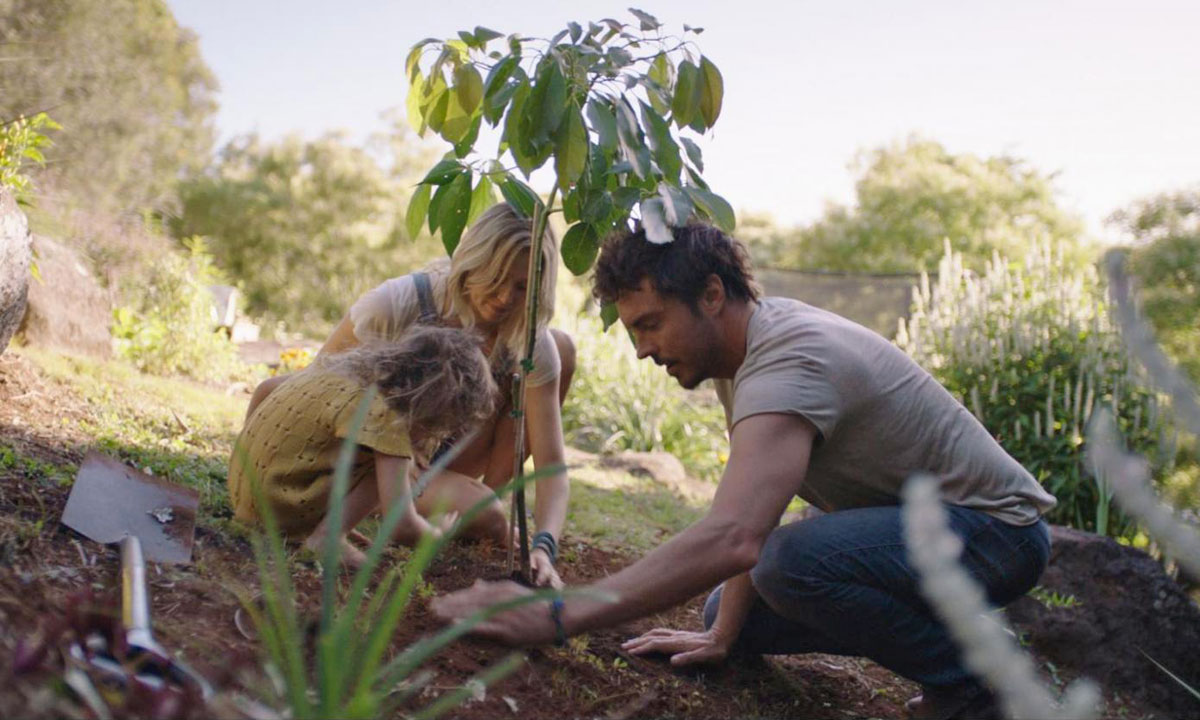 Filmmaker Damon Gameau with his family.

The film uses a fair number of bells and whistles to impart its message. With the aid of some neat visual effects, a tiny Gameau perches on top of a wind turbine with climate activist Paul Hawken, and interviews economist Kate Raworth in a Monopoly car driving along a Monopoly board. The narrative flips between these insights into current projects and role-playing-game-style vignettes of a utopian future with rooftop gardens, twittering birds and Gameau as a cringe-worthy middle-aged dad.

The cutesy visuals and “fun fact” styling imbue 2040 with a friendly, light-hearted ambience entirely appropriate to its target teenage audience. Although deeply serious about his message, Gameau never takes himself too seriously and his boyish charm and willingness to have fun with his subject matter are an important part of the film’s appeal.

It could be described as pop-ecology, it could be described as overly optimistic, but you need to be able to envisage a bright future in order to work towards it and 2040 creates an appealing image of a planet being cared for rather than exploited. If anything can galvanise young people to fight for Earth’s future, it’s this.