The fictional Gerard and Isabelle are a divorced couple whose gay son Michael, from whom they were both estranged, committed suicide. Before his death, he wrote to each of them explaining that they needed to be together on a particular day, in a specific location and they would see him again.

The two reunite in Death Valley, California: the lowest, hottest, driest area in North America. The cinematography is picturesque and the references to the insufferable heat are interminable, yet they choose to turn off the air-conditioning.

Valley of Love focuses on Gerard and Isabelle as they discuss their marriage, their relationship, their children, their current relationships and their careers; they are engaging and sustain at least some interest in a very odd film.

Hollywood has had a fascination with the appearance of angels in sentimental B-grade movies but I wasn’t prepared for a French film to follow that path. Religious overtones and symbolism are everywhere: Death Valley is purgatory as the pair wait to see Michael; stigmata appear on Gerard’s wrist and he, a doubting Thomas, becomes a believer.

There are also odd cameos: Dionne Houle as an old lady chatting with Isabelle in the motel grounds; Dan Warner as Paul, who recognises Gerard as an actor but can’t place who he is or the films he has been in. Paul is a kind of ignorant, insular American who reappears with his wife at a bar but the dialogue goes nowhere. In another scene, at night on a tennis court, Gerard briefly chats with a young deformed girl about death

Director Guillaume Nicloux tries to maintain tension with the possibility of Gerard and Isabelle seeing Michael again and how he could possibly rise from the dead. If either did occur, it would be momentous, but the ending of Valley of Love is somewhat underwhelming.

Depardieu and Huppert are excellent actors and they give very good performances, but Valley of Love is based on the premise that we would all want to see dearly departed loved ones again if we could and how we may be driven to extremes with the thought of such an encounter. We know nothing about Michael, and it is difficult to feel anything in such a scenario. 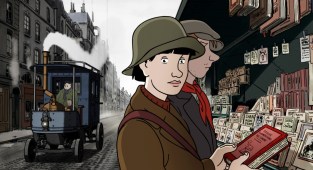 The stars never stray into melodrama, but nor do we connect with their characters’ predicament. Individuals who believe in departed souls contacting living beings may see something in Valley of Love about life after death but it seems like a wasted opportunity to have brought together two major players of French cinema in a minor film experience.

Valley of Love is screening again at Palace Nova Eastend Cinemas on April 13, 16 and 17 as part of the Alliance Française French Film Festival.