“You’ve got to start from the socks, the shoes, the black sausage.”

So begins the decisive and quirky leadership of Lech Walesa in Andrzej Wadja’s new film, Walesa: Man of Hope, a biopic of the radical leader of Polish trade union Solidarnosc who built solidarity in Poland from the ground up.

His solidarity movement is said to have removed the first brick from the Berlin Wall, as it worked against the odds to heave Poland out from under the iron curtain of communism.

Having walked along the art-bombed remnants of that wall in Berlin and been brought back to its drizzly melancholy again and again by David Bowie’s Low album, I found I connected with this Polish story, an enlightening biopic of a man about whom I knew little. When I was at school, World War II was seemingly the end point of history, and anyway, I was likely tuning my mind in to 1977 punk rock instead of the teacher’s voice – which brings me to another element of this film, the agit-punk/agit-pop soundtrack. It strikes just the right chord and sounds the march of the film’s first uprising, the 1970 Gdansk shipyard riot.

It’s a very rousing combination and later, as the movement gains strength, it’s great to see genuine people power coming up against extremist politics, right up close for blunt comparison.

Man of Hope hooks into a very natural vein of realism early on, splicing in real footage shot by the secret police at the time.

Lech Walesa (Robert Wieckiewicz), a caring yet boisterous and articulately stubborn man, recounts his tale to a journalist – from working as an electrician in the Polish shipyards, to heading up strike action and numerous arrests, and eventually being awarded the Nobel Peace Prize.

Director Andrzej Wadja’s film is candid about Lech’s cantankerous side, the impact on his wife Danuta and their many children; it is also frank about the risks he took for the benefit of all.

To outlast the determination of the communist government, a highly resistant personality was required. He found a role he could play, no understudy required. 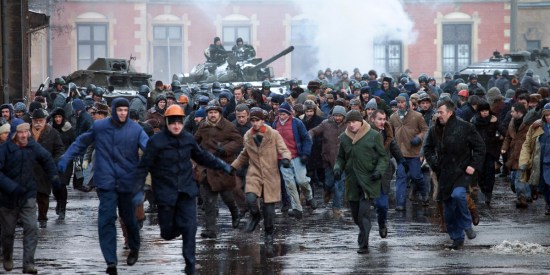 The release of Walesa: Man of Hope marks the 25th anniversary of the first free elections in Poland after World War II, an achievement credited to the solidarity movement. It is showing at North Adelaide’s Piccadilly Cinema and Hoyts Salisbury.