Clearday is the name of this smart young Singaporean cosmetic company, but there is nothing very clear about the way it does business. Its product is called White Pearl, and as playwright Anchuli Felicia King’s ferociously artful lampoon indicates, it has a perilous amount of skin in the Asian skin-whitening game. And now it is all about to be flayed when a TV advertisement the company has made is unofficially let loose on social media and goes viral for all the wrong reasons.

The commercial features a young, dark-skinned Asian woman bleaching her complexion with the whitening cream after her boyfriend leaves her for a lighter-skinned rival. The wizard cosmetic works and the boyfriend returns to his true love while the rival desperately applies White Pearl in retaliation. Her face turns black and her hair frizzy because, the ad warns, the potion only works on “inner beauty”.

The online outrage at the racist implications of the ad is instant and volcanic. The company goes into desperate damage control and in no time the young Asian women in the Clearday office discover the insurmountable differences of opinion and perspective they actually have of the commercial. Some are horrified, others think it’s just a bit of fun. Their attempt at being a global Pan-Asian company has Balkanised into tribal prejudice and contempt.

In director Priscilla Jackman’s brisk, bright and provocative production, the multiple strands of King’s forensic satire are explored with a bracing mix of witty comedy and uncomfortable candour. 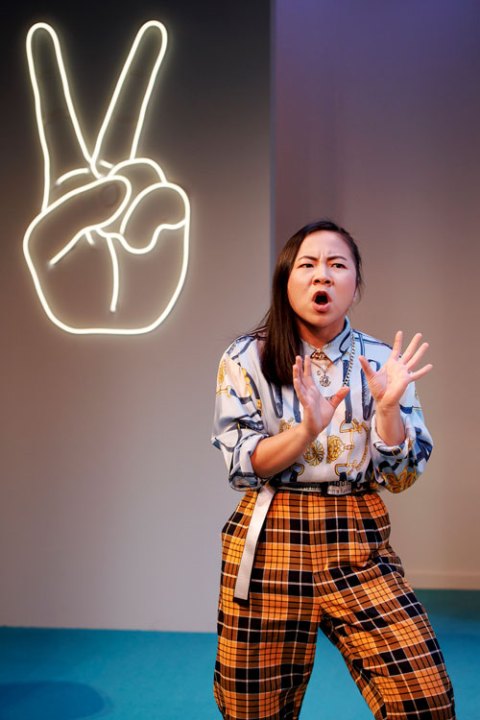 Deliciously lit in gelato tones by Damien Cooper, designer Jeremy Allen’s set is a minimalist office with vertical glass mirrors, a long table and perky-coloured seats. At stage left is a toilet with two cubicles for tearful escapes and other encounters. Along the top is a screen for video projections (designed by the playwright) of the increasingly squalid torrent of online comment and the running total of views as they climb to seven figures. Along one side is a series of horizontal neon lines, on the other a neon hand gives a victory signal. The effect is completed with the enveloping sound design from Michael Toisuta and Me-Lee Hay.

The performances are excellent. King has provided depth and detail for her characters which the director and actors use well. As Priya Singh, the Singaporean company founder, Kristy Best, dressed in chic pale linen, covers the range from benign CEO visionary to abusive, desperate bully as she plays cat-and-mouse with the other women in her employ. She is both monstrous and comic, and delivers some of the play’s most vituperative lines when the united Asian façade drops away and it is down to bare-knuckle racial stereotyping. Cheryl Ho, as her shrewdly obsequious hometown sidekick Sunny Lee, delivers her wisecracks in a mix of hip-hop twang and wry Cantonese drollery.

Deborah An and Lin Yin form an interesting alliance as Soo-Jin Park, the determined young South Korean chemist who has cooked up the White Pearl recipe, and Xiao Chen, the daughter of a mainland Chinese senior official now caught up in a show trial in Beijing. These two see themselves as truly Asian – not like the “British and American  schoolgirls” from Singapore or California.

Mayu Iwasaki is also memorable as Ruki Minami, the demure and highly capable Japanese strategist who helps devise policy. The most Westernised is the Thai-American party girl, Built Suttikul (played with gusto by Nicole Milinkovic), who takes the narrative in a different direction as she tries to fend off her French stalker ex-boyfriend, Marcel (portrayed with unsparing unpleasantness by Matthew Pearce).

White Pearl is a brave and accomplished work which tangles adroitly in the minefield of social media discourse, cancel culture and identity politics. It sends up the excesses of start-up egotism and reminds us that there is a Millennial form of toxicity, too. It revisits the shame and cruelty of the beauty myth, and the predatory impulses of marketing. And alarmingly, it exposes the often vehement racism inherent in Asian nationalism and the persistent prejudice towards African ethnicity.

Anchuli Felicia King acknowledges that her play covers a lot of ground. She describes it as “thematically overloaded” but adds that “at its core, this is a play about nuance. And the danger of its absence.” That is a very welcome corrective. Not only does she invite us to think as lucidly and courageously as she does, it is a funny and often riotous experience as well.

A Sydney Theatre Company and Riverside National Theatre of Parramatta production, White Pearl is playing at the Dunstan Playhouse until October 23 as part of the 2021 OzAsia Festival.