One of this year’s headliners is three-time Grammy winner Angelique Kidjo, who made her WOMADelaide debut three years ago in a performance with the Adelaide Symphony Orchestra and returns this year with a six-member band to sing songs from her re-imagining of Talking Heads’ 1980 Afrobeat-influenced album Remain in Light.

Ian Scobie puts Kidjo at the top of his list of picks, alongside Diawara; Yo, Carmen – a flamboyant reimagining through dance of Bizet’s opera Carmen; the 35-strong Central Australian Aboriginal Women’s Choir, which comprises singers from six remote Indigenous communities who perform German hymns and other sacred music in their traditional languages; The Original Gypsies, featuring three members of ’80s group The Gipsy Kings, and fiery French performance piece Amor.

SA soul and reggae singer-songwriter Adrian Eagle (who will himself perform at the festival on Sunday night) nominates four young Australian singers – Kaiit, Thelma Plum, Thando and Mojo Juju – as the acts he’s most excited to see, while members of The Zephyr Quartet (playing the Zoo Stage on Saturday) include Christine and the Queens, Estonia’s Maarja Nuut & Ruum, Congolese-Belgian artist Baloji and Mexican-US group Las Cafeteras among their picks.

“Remain in Light is such a classic album in itself. It’s one of those first early examples – a little bit like Paul Simon’s Graceland – that essentially took African music and put it into western pop mainstream.

“For her to take that record and redo it in a reinvented way is really exciting. The recording itself is extraordinary but to see her perform that live will be fabulous, so it’s at the top of my list.”

“She’s been on our wishlist for a while … she’s a fascinating combination of someone who’s an actress and absolute activist in Mali, an incredible singer and a terrific electric guitarist as well, which is an unusual combination for a female performer from Africa.

“WOMADelaide’s had a long line of amazing performers from Mali, so she continues that tradition

“It’s kind of a mixture of a blues style right through to funk – she’s got that heritage of ancient African rhythms but actually is quite a modern performer in how she presents the work so I think that’s a really interesting thing to have on stage at the festival.”

“She [Spanish dancer and choreographer Maria Pagés] is quite an amazing performer – I was lucky enough to see this in Edinburgh in the Festival a year or two ago.

“The piece is an incredibly empowering and celebratory work about the power of femininity through flamenco … What Maria Pagés wanted to do with Carmen was turn the victim/heroine into someone who is completely in control, so it’s I, Carmen with an exclamation mark rather than this sense of a woman done wrong.

“It is the most wonderful chorus of flamenco performers that we’ve been able to present. In terms of the scale of a dance work, it really is at another level.

“It’s a wonderful combination of the music, which draws on the original folk tunes which Bizet based his score on for the opera, but also it’s teased out with more of a flamenco style to it. It’s a big show.”

“The choir is such an extraordinary story – first, in terms of the German missionaries coming out and teaching these old religious Lutheran hymns to the people in the lands, and then them being translated into Pitjantjatjara, and then preserved….

“It’s got that mixture, in terms of choral traditions, of Baroque and Romantic – it’s like listening, to some extent, to Baroque choir but sung in Indigenous voices, and their voices are quite exquisite, so that will be an absolute treat.” 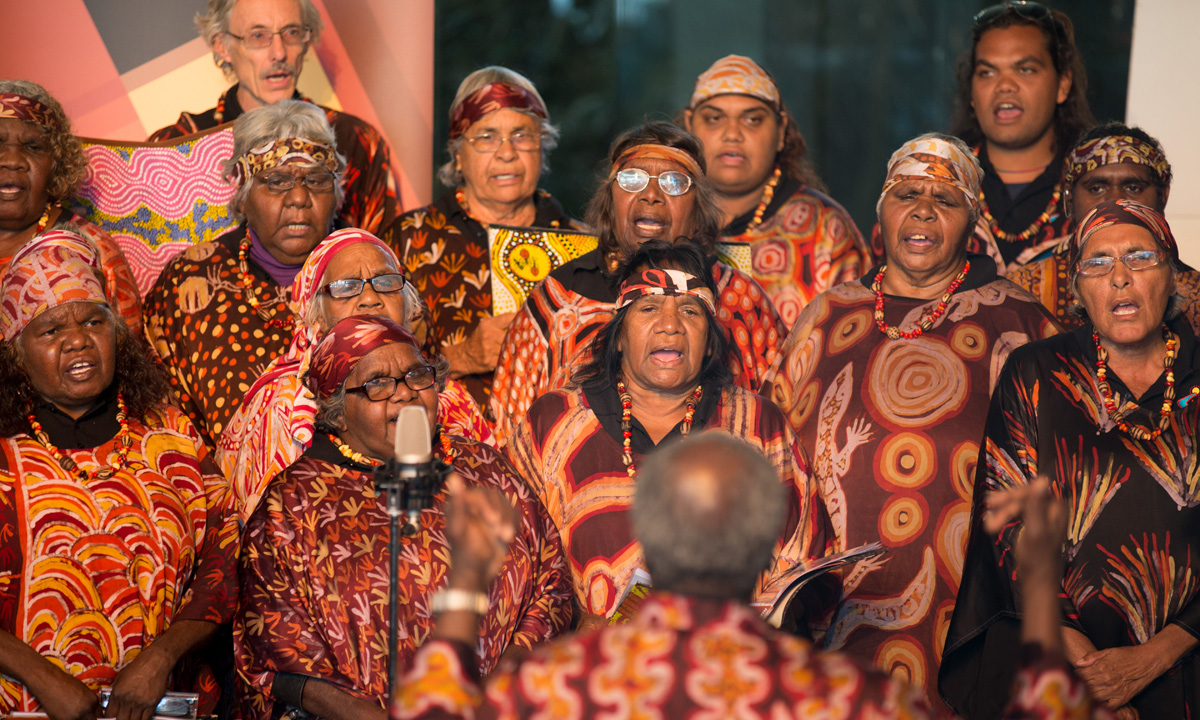 “I saw them at WOMAD in the UK and they’re just so winning. Firstly, there are hits that people of a certain age will remember, but then there’s this extraordinary 12-piece band with guitars just pumping it out – they’re real showmen.

“It’s is a throwback to that sound of when The Gipsy Kings hit the airwaves in the ’80s – it does take you back.

“The show itself is just fabulous, and again, it’s got the hints of flamenco – so there’s a nice connection with Maria Pagé’s company and Yo, Carmen – but aside from that there’s the eight guitarists. It is quite spectacular.”

“This is a site performance piece [presented nightly in Frome Park by Compagnie BiLBobaSSo] … it’s also got kind of a Gypsy flamenco thing going.

“Essentially it’s a lovely duet between a couple that traces their relationship and love, amor, complete with pyrotechnic mania. The set-up is like their living room sofa – they’re a couple at home, and they perform to this quite torrid, tangoish music that tracks their relationship; it’s very funny as well.” 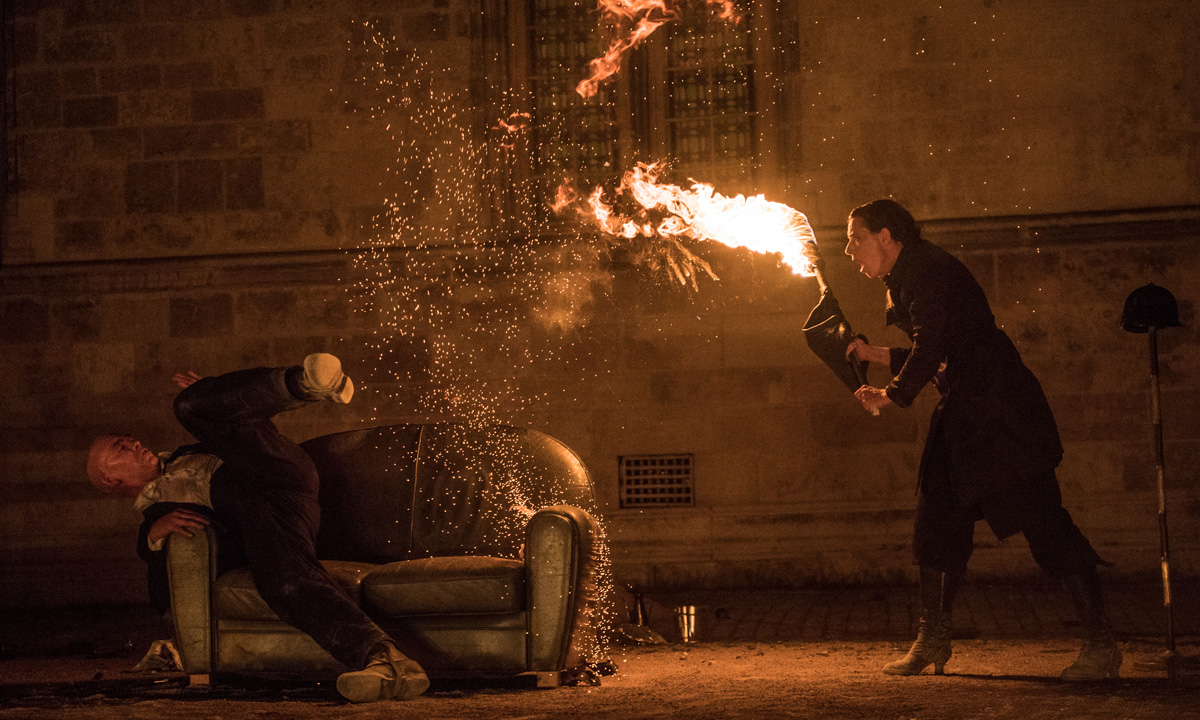 Kaiit: “Kaiit is the greatest singer this country has produced and to miss her set you’d be crazy. Her live set is special and topped off with her amazing band from Melbourne, joined by JayDean, also from Melbourne. Her voice and style is heavenly to the ears, eyes and soul. I can’t wait to hear ‘Duffman’ and ‘OG Luv Kush Pt.2’, amongst other hits.”

Thelma Plum: “Thelma has the voice of an angel and I can’t wait to catch her set at WOMAD. This will be my first time seeing her live but I am a big fan and she is an important voice in the community.”

Thando: “Thando is a powerhouse. I’ve heard that her set at WOMAD this year is with a 10-piece band, so this will be special. I look forward to her singing ‘Numb’ and seeing her sing to the heavens with her full band set-up. If you haven’t seen her live before, you’re in for a treat.”

Mojo Juju: “Mojo always sings with passion and this will be a beautiful thing to witness. [Her recent single] ‘Native Tongue’ was a banger – I have seen her live in Melbourne and she always kills it.”

Maarja Nuut & Ruum: “I saw Maarja perform at Classical:NEXT in 2017 in Rotterdam and was totally blown away by her mesmerising and moving performance – the way that she wove traditional stories from Estonian culture into contemporary musical journeys.”

Central Australian Aboriginal Women’s Choir: “The extraordinary meeting of cultures that inform the work of the Central Australian Aboriginal Women’s Choir fascinates me, especially as their German heritage also forms part of my own background. I have been following their incredible journey for some time now and I can’t wait to see them perform and learn more about their story.”

From humble beginnings to the WOMADelaide stage

Las Cafeteras: “I’m always on the lookout for Mexican music at WOMAD, and this year Las Cafeteras look set to bring an LA/Mexican mix that I’m particularly looking forward to.”

Baloji: “Discovering new music at WOMAD is one of my yearly highlights. Baloji is a new find for me and looks really intriguing.”

Christine and the Queens: “This will be a brilliant live show, I’m sure.”

WOMADelaide runs from March 8-11. It includes the Planet Talks program of live conversations, which will this year feature an International Women’s Day address by former Democrats leader Natasha Stott Despoja, to be followed by an “in conversation” discussion with journalist and political commentator Annabel Crabb.