Danish art-lab Hotel Pro Forma is known for its hi-tech, experimental music performances and this production ticks all those boxes. The majority of the action takes place on a two-tiered set with a projection screen at the back and a translucent scrim in front. Rolling images of woodblock etchings, robotic limbs and vintage photographs are projected onto the screens, casting the choir (caught on the set between them) into silhouette or bright relief.

HPF members Kirsten Dehlholm (director) and Willie Flindt have divided the performance into four sections, each of which introduces a different character through a series of vignettes.

The Gamemaster (Ieva Ezerite) delivers the prologue via hauntingly melancholic vocals which overlay an angelic waltz played on a music box. “Battle is about to begin,” she sings in Japanese while behind her, ghostly figures materialise, seemingly part of the woodblock image on the scrim.

The Soldier (Aigars Reinis), in traditional Japanese battle-dress, is next up. A list of PTSD symptoms and medications appear on the screen behind him, reminding us that soldiers must have suffered alienation, depression and suicidal ideation for centuries before the term PTSD was coined.

The Warrior (Gundars Dzilums) is the third figure and the images that accompany him – open-mouthed tortured souls in their “hall of passion and pain” – are some of the most darkly atmospheric.

The final character is The Spy (Ilze Bērziņa), who sings of love (“This hideous heart!”) and turns into a superwoman (with fabulous retro sci-fi imagery) in order to escape. 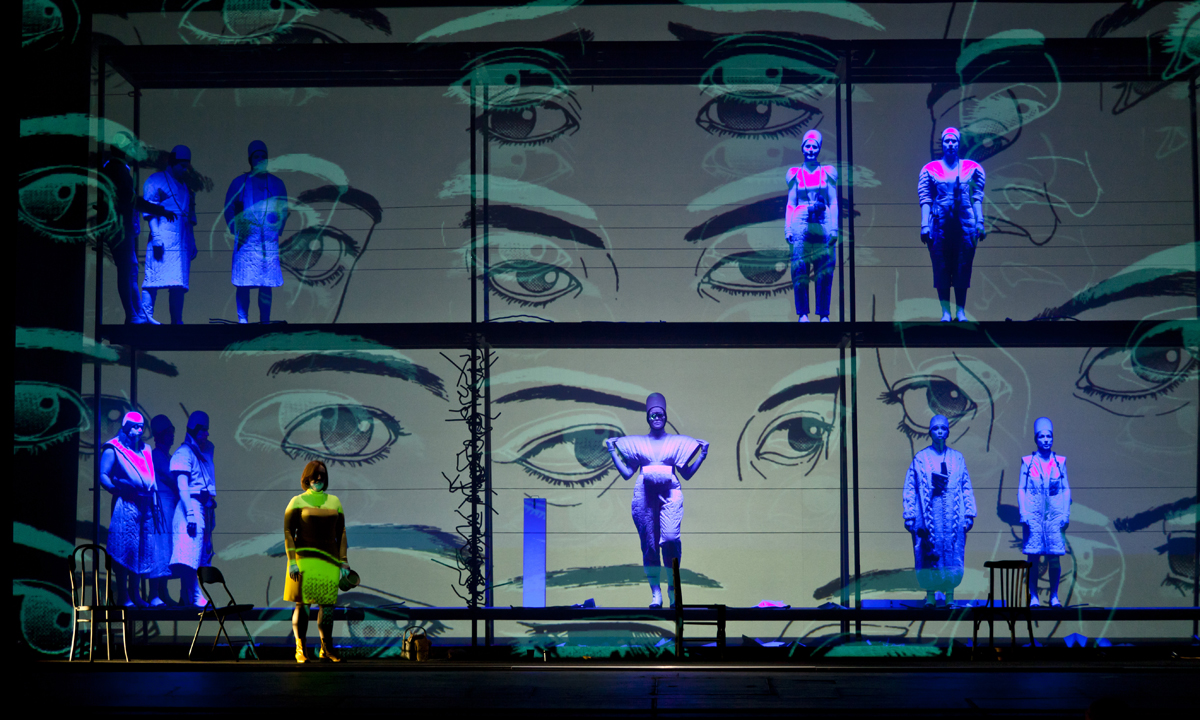 The stunning music (by Latvian composer Santa Ratniece, French electronic artist Gilbert Nouno and British baroque-pop ensemble The Irrepressibles) is the quivering silver thread on which the production hangs. Live vocals from the Latvian Radio Choir soar and meld with a pre-recorded aural backdrop that ranges from soul-piercing arias to screeching electronica.

HPF’s inter-cultural collective have cut across ideas of artistic, historic and national borders to look at war from a global perspective, experimenting with traditional art forms in order to make something highly contemporary.

The slow pace, lack of narrative thread and stylised imagery make it more like an extravagant and very beautiful art installation than an operatic or theatrical performance, but it’s a thought-provoking challenge to our preconceptions of what stage productions should be.

War Sum Up will have its final performance at The Dunstan Playhouse tonight (November 6). Read more InDaily and CityMag OzAsia Festival stories and reviews here.