Greste, who has worked as a reporter across Africa, the Middle East and other parts of the world, spent 400 days in a Cairo prison, alongside two Al Jazeera colleagues, after being convicted in 2013 on trumped-up terrorism charges.

He has since dedicated his career to advocating for press freedom and in October published his part-memoir, part-history book The First Casualty, which argues that the “war on journalism” is now present in western democracies – including Australia. This week, he was also appointed University of Queensland’s UNESCO chair of journalism and communication

Here, Greste talks to InDaily about his upcoming appearance at WOMADelaide’s Planet Talks in March, why issues of press freedom have defined his life since his experience in Egypt, and the slightly “weird” experience of going from being an interviewer to interviewee.

Why do you think it’s important to speak about issues like press freedom in a discussion-like setting?

We need to make this a much bigger part of the public conversation. The problem is, press freedom around the world has been eroding, certainly since 9/11, and that’s because governments have been using national security as an excuse to chip away at the kind of space that they’ve been operating in in the past.

National security is such a fundamental theme here; it’s tending to trump everything else.

Have you done a forum discussion before?

I was part of a panel at Splendour in the Grass music festival out at Byron Bay, which was fantastic. I really enjoyed that. I’ve given a lot of talks about the book at various libraries and events across Australia. That sort of thing is something I’ve really been enjoying doing.

I’ve also been speaking a lot about press freedom issues, as [it’s] the basic theme that’s involved in the book. It’s been something that’s really defined my life since I got out of Egypt.

What can audiences expect to get out of the Planet Talks session that they wouldn’t necessarily get out of your book?

There’s nothing like engaging with people directly. The book is great if you want to get a deeper understanding of it but engaging, sitting down and hearing, and getting involved with the talk allows you to continue the discussion.

The book is described as “part-memoir, part-history”. How much of it deals with your own experiences versus research or discussion of events?

Most of the book is based on my experience … it was really when I was in prison and started thinking about why it mattered, why it made a difference and the narrative behind it that I started to think I really needed to write the book. 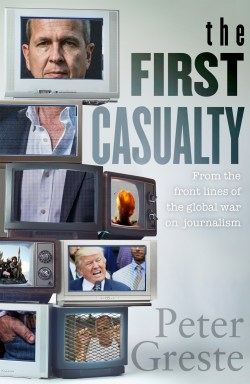 I’ve drawn on everything that I’ve been through as a journalist working in places like Iraq, and working through 9/11, even before then, my experiences as a reporter in Afghanistan in 1995. It’s all tuned into that overall narrative, that perspective that’s quite unique.

Not a lot of people have had the range of experience that I’ve been lucky enough to have in the course of my career. I’ve been lucky to tie these things together and use my experience in Egypt as the central theme to the book, which I think will help carry people through the drier bits.

Will any topics be off-limits at the Planet Talks session or are you planning on being an open book?

I’m open to revealing everything that happened from my professional experience. There’s obviously my personal life that I’d prefer to keep personal but I want to keep this as open as I can.

As a journalist, has it been difficult shifting roles from interviewer to interviewee?

I’ve spent my entire professional life being the one who’s been asking the questions and doing interviewing and telling stories about other people. I’ve been the medium, literally, for those stories. To be on the other end as the subject of that story has been a little bit weird and a little bit uncomfortable.

I’ve now come to terms with it and have accepted it. As a professional, I recognise the value of stories in helping people understand bigger issues and if my story helps do that then I think it’s worthwhile and I’m happy to do it.

What do you want audiences to take away from the Planet Talks session?

Peter Greste will take part in a conversation with Guardian correspondent Ben Doherty as part of WOMADelaide’s Planet Talks program in Botanic Park on March 12. This is an edited transcript of a phone interview he did with InDaily journalist Steph Richards on Wednesday.