Dressed in nothing more than penis sheaths, grass skirts and coloured head feathers, a group of Melanesians performed a traditional dance in Cinema Place before the Adelaide premiere of Tanna.

They weren’t simply brought in to entertain passers-by with their rhythmic jumping, clapping and whooping. They are part of the Yakel community on the remote Pacific island of Tanna, and the costumes and dance are authentic and intrinsic to their traditional way of life.

The performers  are also the main cast of Tanna.

Tanna is the first feature film ever made portraying life on Tanna (part of the Archipelago of Vanuatu). It is a love story based on real events during the 1980s that led to the island’s “kastom” (law) being changed to allow love marriages as well as the traditional arranged marriages.

Directors Martin Butler and Bentley Dean made the film in collaboration with the people of the Yakel and Imedin communities, who wanted to share some insight into their world via the tragic but ultimately inspiring story of two young lovers who disobeyed the kastom – at the risk of their own lives and the lives of their families and other villagers – so that they could be together. 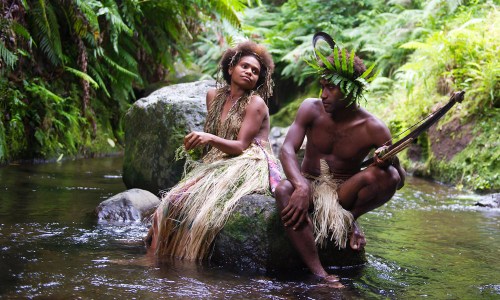 Made before Cyclone Pam tore through the region earlier this year, Tanna shows the island’s idyllic black and white sand beaches, mountainous landscapes covered with lush rainforest, grass huts and tranquil waterfalls, as well as the active Mount Yasur volcano which provides a stunning backdrop to many of the scenes.

Yakel and Imedin villagers – including the main characters Chief Charlie, Wawa, Dain and Selin – portray the natural island life with much confidence, poignancy and humour, as is the way on Tanna.

If you have ever visited Tanna Island, or even Vanuatu, you will feel transported. If you haven’t, the film is an entertaining and interesting observation of traditional culture on the island, as well as a love story with enduring and far-reaching themes of loyalty, courage, tolerance and conflict between the old ways and the new.

Tanna (in Nauvhal with English subtitles) is screening again at Palace Nova East End on Friday, October 23, as part of the Adelaide Film Festival.