One would like to think that radical aesthetic movements will find a way to be seen and heard regardless of their place and time, but no doubt a wealthy heiress devoted to the cause helps to ensure success.

Peggy Guggenheim inherited her fortune at 21, when she began collecting Modernist art. She devoted her life to the cultivation of the movement and supported an impressive list of major artists such as Jackson Pollock, Mark Rothko and Max Ernst (whom she later married). She is a major figure of the 20th century, a great visionary and patron, and a saucy subject for a documentary.

Peggy Guggenheim – Art Addict follows audio interviews from 1978-79, just before Guggenheim died at 81. Lisa Immordino Vreeland discovered the tapes in Guggenheim’s house, years after her death, and this is what she did with them.

The documentary is basically a voiceover of Guggenheim speaking candidly and unapologetically about affairs with key artists of the time: Samuel Beckett, Marcel Duchamp and so many others – so many others. 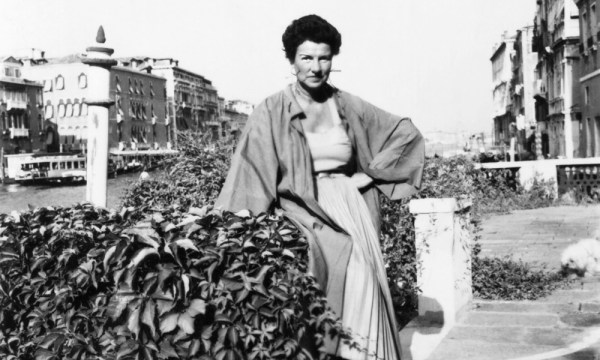 She claimed Constantin Brancusi was extremely upset to watch her leave the morning after their encounter but she wasn’t sure if it was because he’d fallen in love with her or because he’d given her his sculpture Bird in Space for such a cheap price.

With the mention of each lover, the works of these great artists, alongside the work of other artists she championed, flash on the screen so that there is a montage of Modernism projected. It’s an incredibly visual experience.

There is also footage of Guggenheim looking the ultimate socialite, conservative-Bohemian and stinking rich, yet it’s a shy woman we see, someone socially ill at ease, the very antithesis of what you’d expect from the strong voice laughing and narrating her sexual exploits.

Vreeland established herself as a talented documentarian with Diana Vreeland: The Eye Has to Travel, a film about the legendary fashion editor of Vogue and Harper’s Bazaar, so there is a theme of the aesthetic visionary in her work. How wonderful she chose Peggy Guggenheim as a follow-up to her own grandmother-in-law. What an essential figure in art history and what an engaging eccentric to enjoy.

Peggy Guggenheim – Art Addict screens again on Thursday, October 22, at the Mercury Cinema as part of the 2015 Adelaide Film Festival.