Exciting and edgy contemporary Asian art will take centre stage at the 2015 OzAsia Festival, with new director Joseph Mitchell determined to get festival-goers to “take a risk”.

Mitchell says OzAsia has led the way in bringing diversity to the stage over the past eight years – and now he believes it’s time to lead the way again by showcasing the new wave of 21st-century Asian artists.

“Exciting, explosive work is being born out of contemporary Asia,” he says.

“Shanghai, Tokyo, Seoul, Jakarta – these are major cities of the world which are driving influences in fashion, food, lifestyle, social interaction. There’s so much coming out of this place. As artistic director, I get really excited about that.

“Festivals exist to broker new art-forms, to support risk-taking, to give audiences the confidence to try something new. I’ve tried to reflect that in the programming of the work, and also the environment.”

A number of the artists on the 2015 OzAsia Festival program, released today, have toured in Europe, Asia and America, but have never been to Australia before.

They include Indonesian contemporary theatre collective Teater Garasi, which will present  dance-theatre work The Streets in a performance space transformed into a night-time scene from Jakarta, with the audience on stage and feeling like part of the action.

“As you’re standing around and people are serving you drinks and you’re eating cheap street food, there will be someone begging you for money and someone singing songs and military police checking your ID, so you’ll get this immersive feeling of being in a Jakarta street environment,” Mitchell says.

“That slowly merges into what becomes a really beautiful dance-theatre performance.”

Overlapping narratives in the show explore conflicts between modernity and tradition, urban and country life.

In his first program as artistic director, Mitchell has sought out work that reflects the rapid changes in Asia, including increasing urbanisation and the changing social fabric. The lifestyles of young people in many large Asian cities are fast-paced and technology-infused; they are also much freer than those of earlier generations.

“What I find really interesting about performing arts and visual arts in a lot of countries in Asia is that they still have fundamental respect and understanding of tradition, but also know that now’s the first time they can really break the rules,” he says. 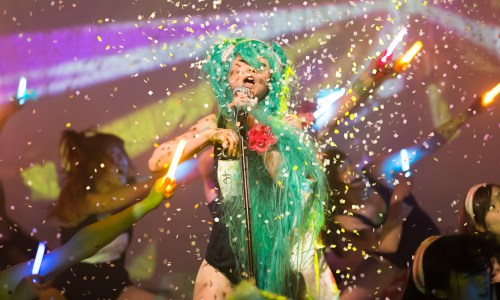 One of the most “out-there” shows on the program – Miss Revolutionary Idol Berserker  (pictured above) – even provides audience members with raincoats.

Mitchell says the Japanese dance-theatre-music spectacle is like a wild journey of the streets of Tokyo’s Shinjuku, but with an underlying message about culture and consumerism.

“Everyone in the audience has to wear raincoats for protection and then they basically go on this contemporary performance of organised chaos,” he says

“They’re kind of playing around with this sense of, ‘We’re not kimonos and cherry blossoms, Japan isn’t about seaweed and tofu’, and they throw it all in your face while you’re sitting there.”

International collaborations are also a theme of Mitchell’s program, and one of the highlights will be Play (pictured below), a performance choreographed and danced by Sidi Larbi Cherkaoui (Belgium) and Shantala Shivalingappa (India). Play, which was originally created at the request of German choreographer Pina Bausch, merges traditional Indian Kuchipudi with contemporary dance.

“It’s a real sense of two of the world’s best dancers sharing the stage together in an intimate sense,” Mitchell says.

“You’ll see these two artists up close in a really playful and experimental work that uses contemporary dance as platform.

“What’s really lovely about it is that it’s full of dance, music, acting, monologues, solo musicians, audience interaction, multi-media, game-playing , puppetry … the word Play is the only word to call it, because they play with the performing arts.” 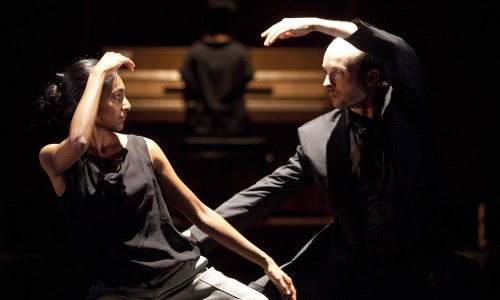 The free Moon Lantern Festival, which has been cancelled in the past two years due to bad weather, will return this year on September 27 – but with a difference. Instead of people sitting in Elder Park and watching entertainment unfold on a central stage, they will be encouraged to walk around and explore a range of installations and roving performances, with the moon lantern parade occurring after dark.

OzAsia will introduce Night Noodle Markets at the Adelaide Festival Centre, and the Blue Hive and the Station Road precinct. The markets will run for the 11 nights of OzAsia and will be like a festival hub, with Mitchell promising Asian fusion food from some of the state’s top restaurants, as well as free music, performances, lanterns and trinket stalls.

“That fits into this kind of immersion feeling which I’m trying to bring into the festival this year,” he says.

“I’m trying to make it impossible for someone to just walk in and see one show and leave again. If you’re a real festival freak, you can come down at 5 o’clock and go home at midnight.”

Other 2015 OzAsia Festival highlights include:

Amber: A love story brought to the stage by Chinese director Meng Jinghui, with impromptu rock, dance and “rapid-fire multi-media”.

Spectra: World premiere of a new work blending contemporary dance, Japanese Butoh, live music and digital artwork, by a team of artists from Australia and Japan.

Ann Hui Career Retrospective: Part of the OzAsia film program, the retrospective will feature a snapshot of works from the 40-year career of prolific Hong Kong director Ann Hui.

The 2015 OzAsia Festival will run from September 24 to October 4. The full program is now online.