Governments and property developers alike generally talk up the provision of affordable, healthy and connected lifestyles for their citizens and clients, but this doesn’t always translate into effective spatial planning policy or good urban design.

Ongoing research by the Australian Urban Observatory shows that when it comes to liveability, rhetoric and reality can be two very different things. Adelaide’s latest national scorecard reveals wide variation across the metropolitan area for all liveability indicators, including access to quality green open space.

And while the COVID-19 pandemic has highlighted the importance of well-designed, publicly accessible recreational park land, it has also drawn attention to the inequitable distribution of this precious resource – with Adelaide’s “middle rim” suburbs often the lowest ranked.

As former lord mayor and member for Adelaide Jane Lomax-Smith has pointed out, although routinely making The Economist’s top 10 world’s most liveable cities, Adelaide is the park-poor capital of Australia – with only 10 per cent of the metro area allocated to public park land, compared with 20 per cent in Melbourne, 40 per cent in Perth and 57 per cent in Sydney.

Public open space includes parks and recreation reserves, public gardens, nature reserves, civic areas and promenades where people can congregate for active and passive recreation without being excluded for economic or social reasons. As urban infill eats up private open space, biodiversity and tree canopy, it becomes increasingly critical that these spaces are planned, designed and managed well.

Policy makers should not be satisfied with the current levels of park land in Adelaide, and we would be better served by clear moves – not just aspirational rhetoric – to cultivate and expand on those assets.

These are not new ideas. Both the National Trust and Green Adelaide are turning to history for inspiration – pointing to Charles Reade’s early 20thth-century concepts for a second ring of metropolitan park land and River Torrens linear park – and adapting these concepts into ambitious plans for future reclamation of green open space.

During his five years in Adelaide (1915-20), town planner Charles Reade proposed a second outer ring of park land and a linear park running the length of the River Torrens.

The Trust’s newly launched 50 Year Plan for Metropolitan Adelaide cites Adelaide’s Metropolitan Open Space System as the means to resuscitate and expand Reade’s concepts on a grander scale. New linear parks would be cultivated along restored waterways criss-crossing the Adelaide Plains to link an interconnected national park network in the hills with an uninterrupted coastal park from Semaphore to Sellicks.

The National Trust proposes new linear parks along restored waterways to increase the linkages between Adelaide’s evolving coast park and expansion of a large national park along the hills face. Source: https://nationalmap.gov.au/

Historian and former National Trust president Norman Etherington acknowledges these big-picture concepts will need to be progressed incrementally by successive state and local governments, and suggests an annual review of the state’s open space grant program to hold future governments to account. I would add that tightened legislation and a prudent renaming of the Planning and Development Fund to reinforce its true purpose as an open space fund would avoid further pillaging by the state planning agency.

Each year the Australian Institute of Landscape Architects (AILA) champions the quality and quantity of designed landscapes through its annual awards scheme, and many of these projects are realised through the open space grants program. Outstanding historical examples include Hassell’s Adelaide Zoo Entrance Precinct and Taylor Cullity Lethlean and Troppo’s design for Henley Square. 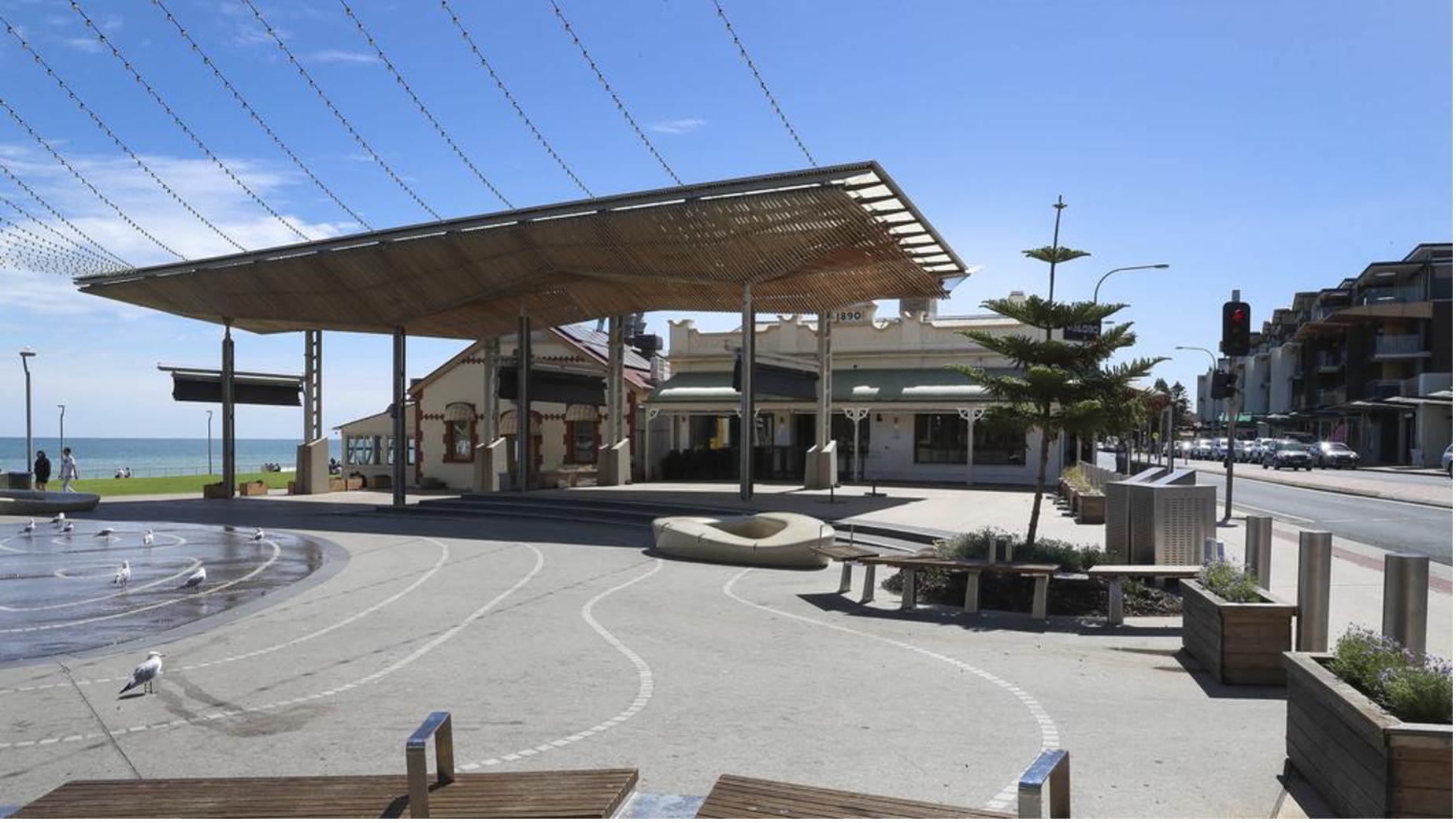 Located on the Semaphore to Sellicks coast park, TLC and Troppo’s design successfully draws people into the central space with a cooling ephemeral water feature flanked by high timber shade structures. Less successful perhaps, is TLC’s reinvention of the northern half of Victoria Square, which somehow contrasts unfavourably with the unretouched southern half, where John Dowie’s Three Rivers Fountain now sits. Perhaps it’s the expanses of heat-sinking hard surfaces that are less welcoming, or maybe the full masterplan just needs to be realised.

Left: TLC’s reinvention of the northern half of Victoria Square contrasts with the unretouched southern half. Right: TLC’s original masterplan. Photos: John Gollings and Sam Noonan 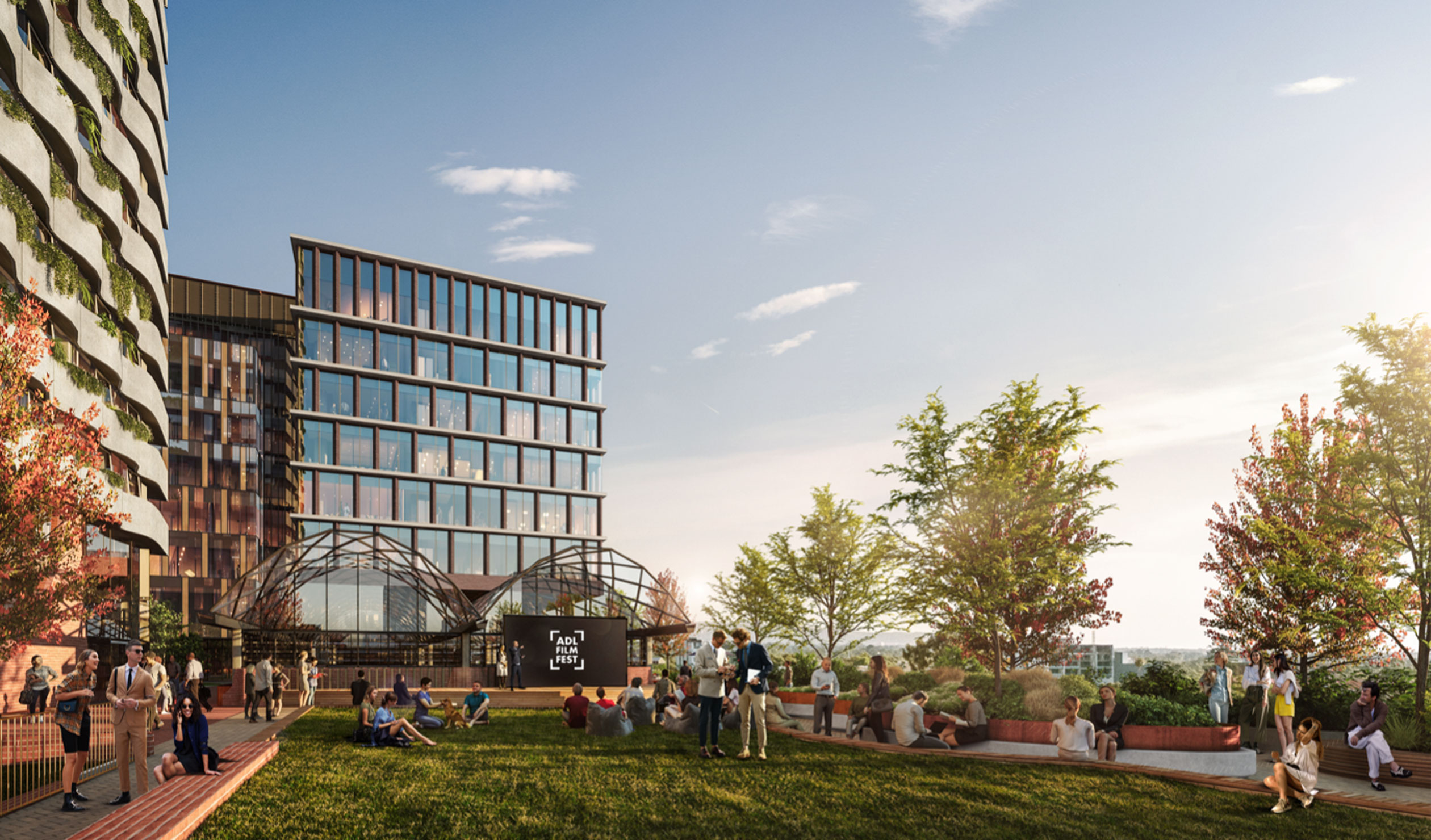 Responses to climate and topography are evident in this year’s AILA award winners. A standout is Birdseye Studios’ Barossa Adventure Station, a multi-level park land that integrates play into conservation of the old railway station cultural landscape. The play space draws inspiration from the natural and cultural heritage of the site and works sympathetically with the natural topography, crafting play opportunities which echo activities and movements from the site’s former railway and agricultural role. 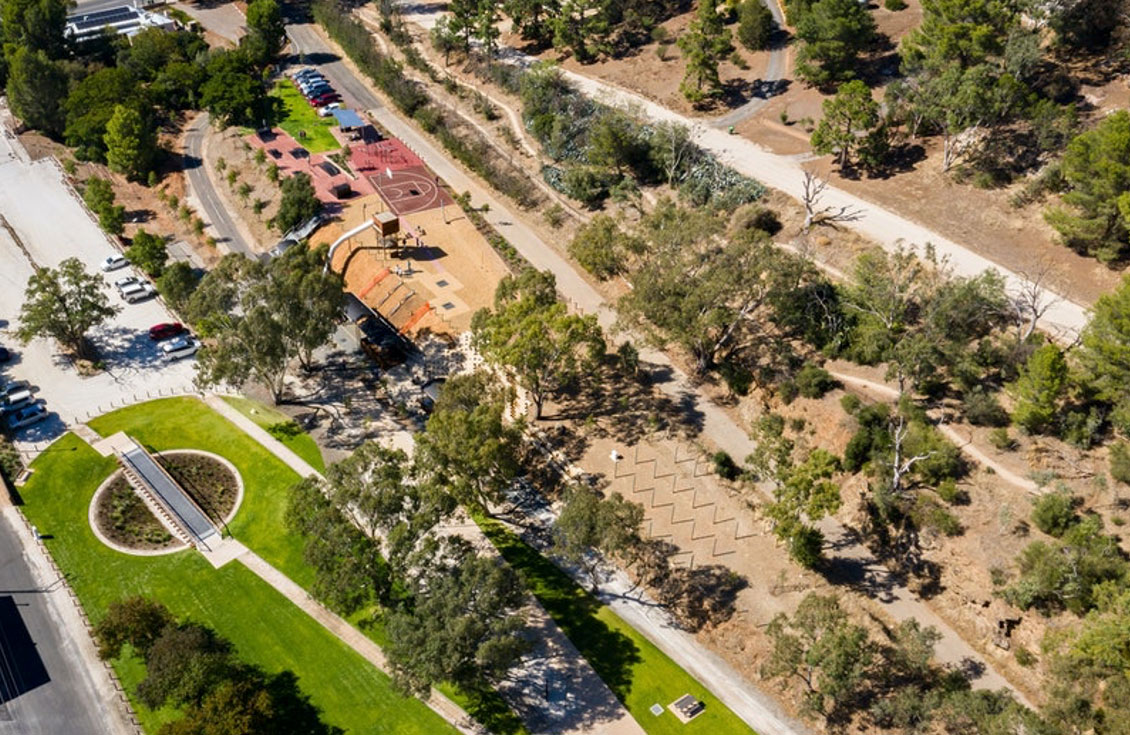 Impressively grand in scale is Tract’s award-winning contribution to the Northern Connector Project. Engaged to design bridge, active transport networks and landscape, Tract drew contextual inspiration from Barker’s Inlet, the surrounding market gardens, salt pans, wetlands and crystalline forms, as well as the habitat of migratory bird and butterfly species. Key to the project were planting strategies for ecological diversity, turning what could have been an alienating expressway environment into a spectacular and purposeful peri-urban landscape. 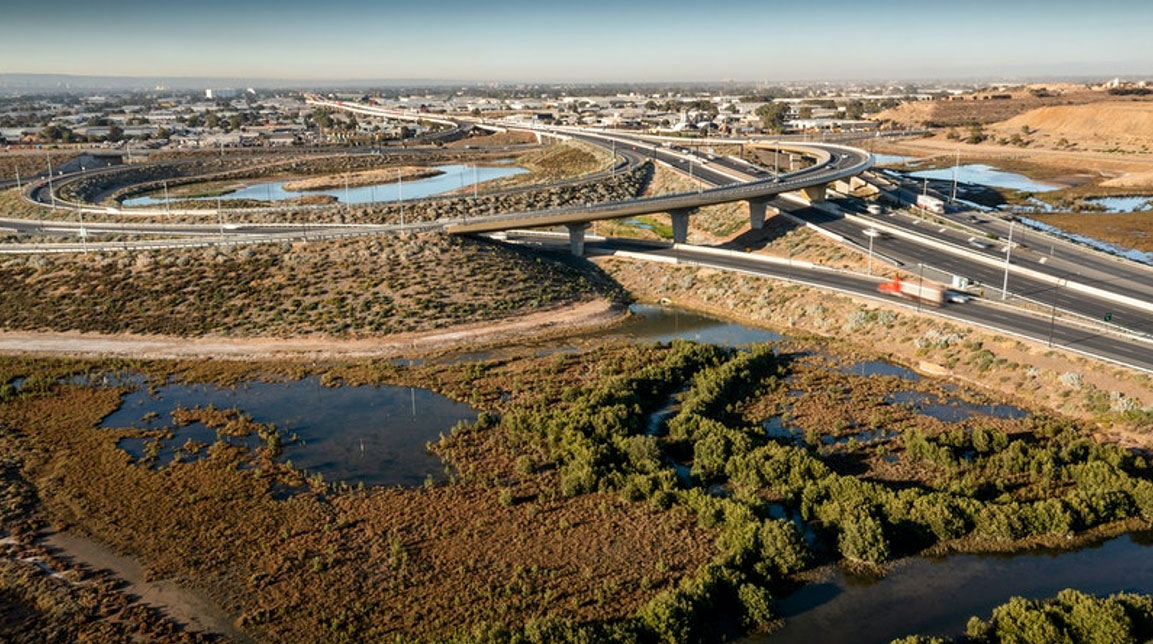 The paucity of green open space in Adelaide can lead to competition between passive and active modes of recreation, and tensions between the casual and organised use of park land. Throw in the pressures of those who see these spaces as potential peppercorn leases for institutional and commercial exploitation, and you have a political bunfight on your hands – as is currently occurring with the proposed rezoning of vast sections of the National Heritage-listed Adelaide Park Lands.

All too rarely the inexorable alienation of public park land is reversed. Karrawirra Parinangku and the Kaurna Learning Circle, at the north entrance to the University of Adelaide, turns a former staff car park into a place of reflection and inclusivity. The historic Mitchell entry gates and spear-top fence that once separated the university from the banks of the Karrawirra Pari / River Torrens have been removed in a liberating gesture that invites the public into a rich place of ceremony articulated through natural raw materials. Song lines depicted in sand and native plantings complement Paul Herzich’s Wangu Poles, carrying forth messages of hope for a more inclusive future. 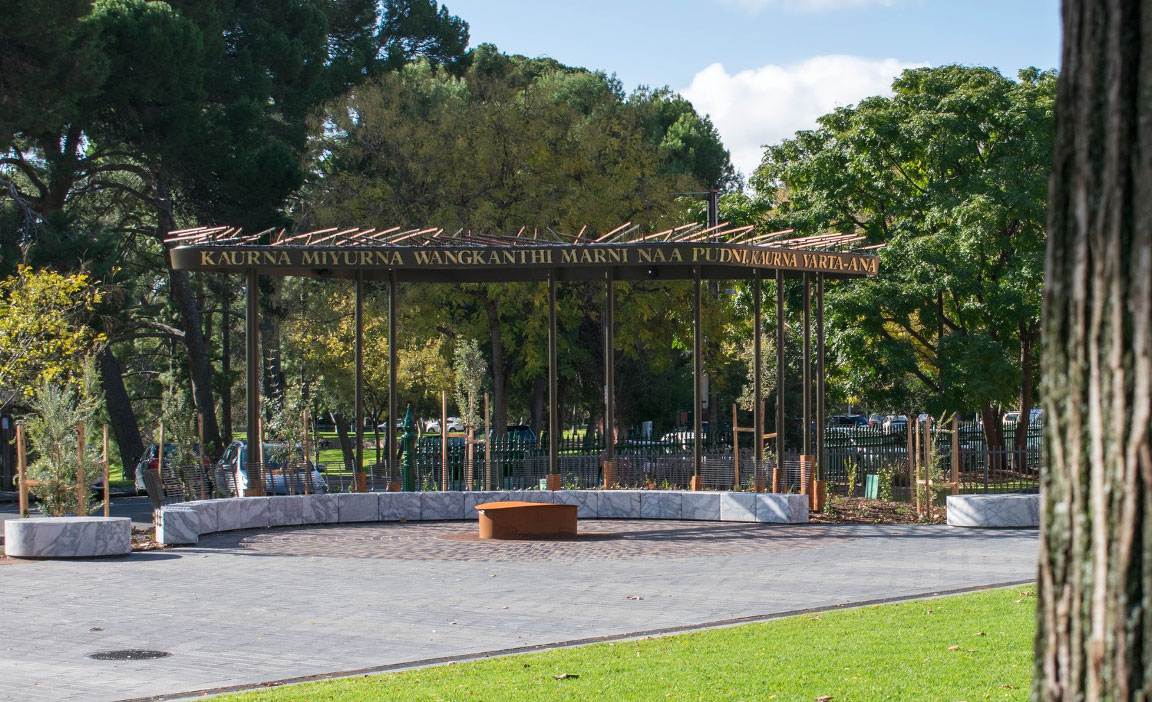