A common ironic observation in conservation circles is that developments are often named after the things they destroy. What was once a ridge of ancient oaks near Chicago became the suburb of Oak Park. All that remains of Woodley’s Queen Adelaide vineyard in Glen Osmond is Vine Lane and Queens Lane, while Victoria Square, where kangaroos no doubt once grazed, is now Victoria Square/ Tarntanyangga – Kaurna for Red Kangaroo Dreaming.

The same might be said of the fast-disappearing banks of the River Torrens since their rebranding as “Adelaide’s Riverbank” just over a decade ago. At the time, then Professor of Architecture and Urban Design at the University of Adelaide Ian McDougall ­described the area between the old Royal Adelaide Hospital and its new site adjacent the railway yards as “one of the most significant public precincts in Australia”.

McDougall’s firm, Ashton Raggatt McDougall, was charged with overseeing the original Riverbank Masterplan in 2011, the same year the AFL, SANFL, SACA and state and federal governments reached agreement on an upgrade of Adelaide Oval. The plan placed emphasis on high-quality design of the public realm, and on creating north/south connections between the city, the river, and the park lands, with a focus on the oval, footbridge, festival plaza, casino and convention centre redevelopments.

McDougall also envisaged a new natural riverbank area around Pinky Flat, complete with boardwalks and wetlands in “an immersive, idyllic and pre-European landscape” that would cleanse the river and provide a living resource for the Kaurna community. 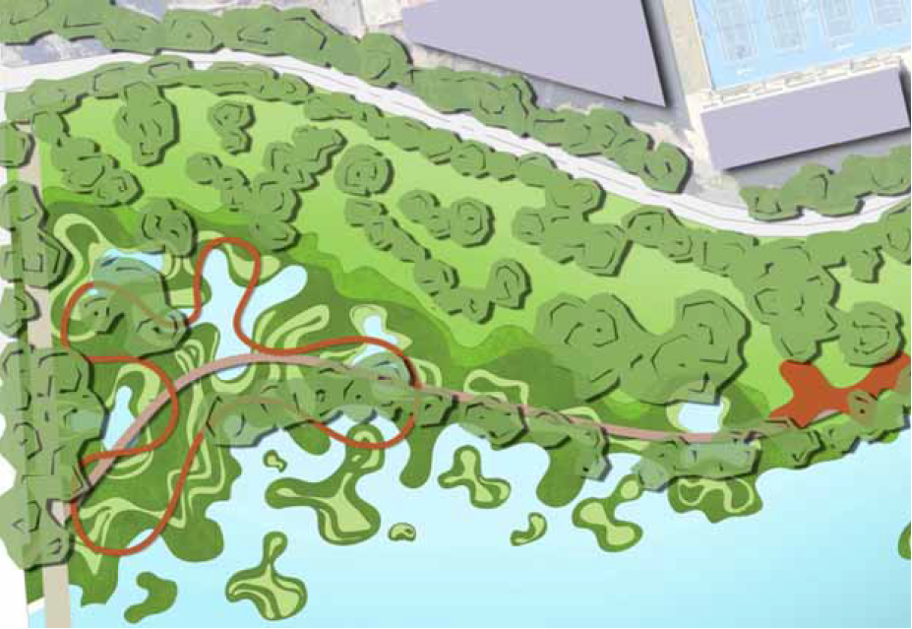 ARM’s design work was augmented by the extensive 5000+ Integrated Design Strategy for Inner Adelaide, and followed in 2013 by the Greater Riverbank Precinct Implementation Plan and subsequent establishment of the Riverbank Authority to coordinate development ­– as well as park land and river bank restoration – of an expanded area of 380 hectares between Bowden and Hackney. In its consultation phase, this plan referred to “Adelaide’s Great Park” and proposed a Federation Square-style festival plaza and new cultural precinct with returned park land at the old RAH site.

While the Authority has since been disbanded, the State Government’s ambition to continue developing this larger precinct continues, with a worrying new revision of development controls to enable “future strategic land use and built form outcomes” on an expanded area of park land on both sides of the river now underway.

With new proposals on the table for building a second hospital and associated transit hub, along with a colossal new sports arena positioned only 15 metres from the water’s edge, it seems timely to take stock of how successful the various planning and design frameworks have been in co-ordinating and implementing a coherent vision for this whole area, which is defined as public park land under the Adelaide Park Lands Act 2005.

At the heart of all the design rhetoric was the ambition to reconnect the people of Adelaide with the River Torrens through exceptional public spaces, landscaping, park land, walkways and bikeways, as well as jetties, boardwalks, boats, bridges and restored natural areas.

While connection has been technically achieved with the completion of a pedestrian route through Adelaide Railway Station and over the Adelaide Oval footbridge, the ultimate outcome for the entertainment precinct between King William and Morphett Streets has been the creation of an overwhelming physical barrier between city and river in the form of the convention centre, casino, hotel and Riverside Centre. The paucity of legible routes through this assemblage of buildings compounds the “barrier-effect”, which will only be reinforced further by the construction of a massive commercial tower in the middle of the Festival Plaza. 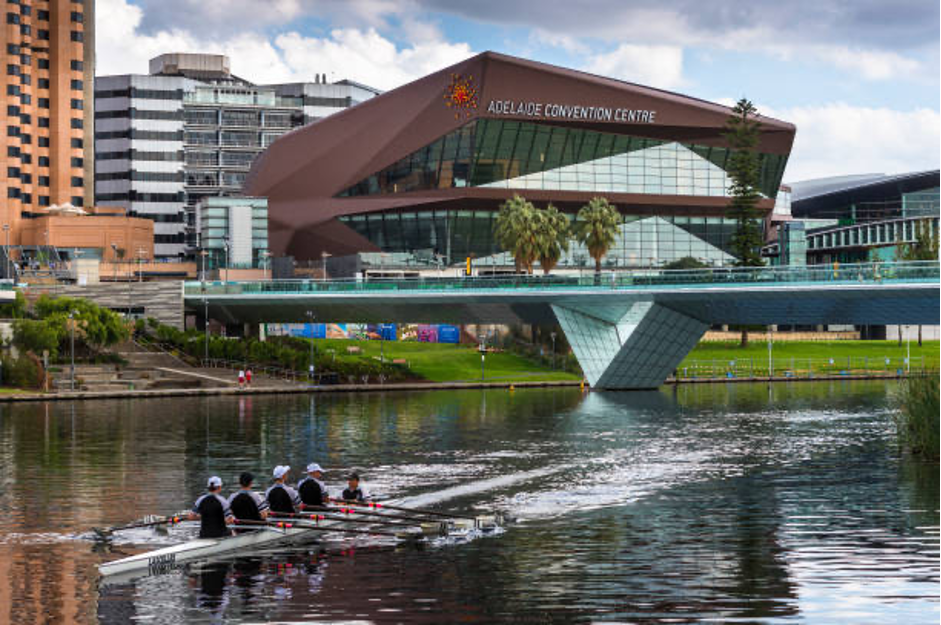 While the entertainment precinct embraces its river frontage well, it turns its back on the city. A paucity of legible pedestrian routes through this assemblage of buildings compounds the “barrier-effect”. Photo: Getty Images

Further up the road in the biomedical precinct, what Lord Mayor Sandy Verschoor describes as the “island-effect” comes into play.

“Care needs to be taken that we don’t inadvertently create a series of islands around the city… We need to ensure there is always appropriate access and connection to and from the park lands and we must explore all opportunities to create greater flow between major developments and the rest of the city,” says Verschoor.

By building over the railway lines, the  Convention Centre at least embraced its river frontage, leaving space for public park land on the river’s bank. The same cannot be said for the biomedical precinct, which has indeed evolved into an archipelago of isolated buildings in a sea of roads and railway tracks. 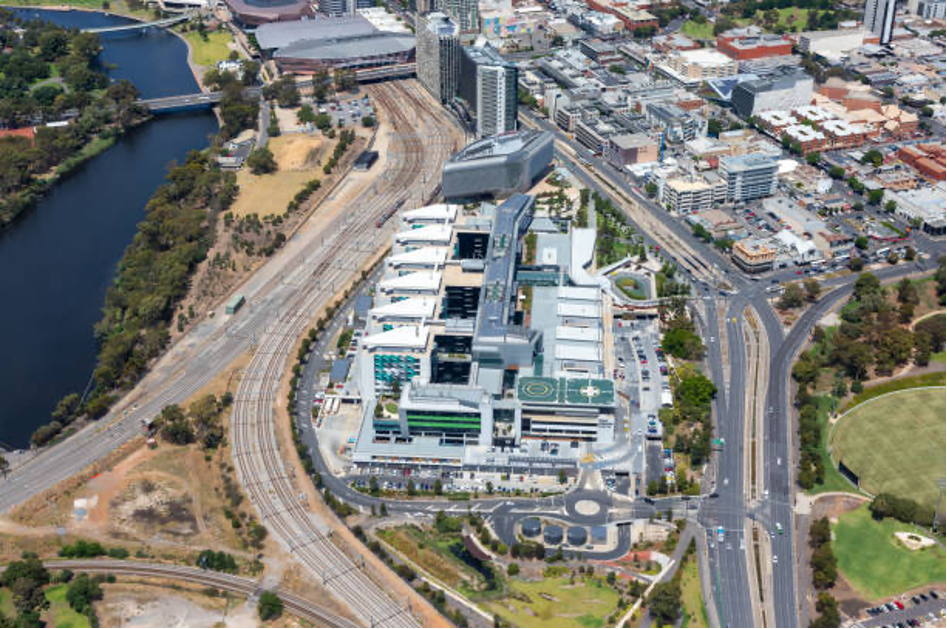 The biomedical precinct is now an archipelago of isolated buildings in a sea of roads and railway tracks. Photo: Getty Images

Like the Adelaide Convention Centre across the road, the proposed new Riverbank Arena could feasibly be built over the railway tracks, connect to the city, and leave space for the general public to continue enjoying the river. Instead, it steals public park land, towers over the river’s edge, and once again cuts itself off from the city it is supposed to be bringing to life.

And like the new RAH before it, the Women’s and Children’s Hospital design misses the opportunity to connect patients to park land, instead proposing a car park, roadways and transit hub in the middle of the adjacent National and State Heritage-listed Adelaide Gaol, Thebarton Police Barracks and historic olive grove precinct. Again, it appears the option of building this infrastructure over the railway lines has not been seriously explored.

The Lord Mayor has also expressed concern about the incremental and cumulative impacts of such developments on the Adelaide park lands, which are part of a World Heritage nomination being developed by Adelaide City Council in collaboration with the State Government:

“Adelaide’s park lands are the city’s crowning glory and the envy of major cities across world. As custodians of the park lands, we are committed to making the most of our natural surrounds and ensuring our park lands are enhanced and retained for generations to come,” she says.

Verschoor is not the only one to be raising alarms bells. Adelaide Park Lands Association president Shane Sody has vowed to fight any incursions onto National Heritage-listed sections of park land, while Community Alliance SA president Dr Iris Iwanicki is raising serious concerns over the State Government’s continuing assaults on public open space, and opportunistic rezoning of public park land to accommodate public and private built development.

“We are seeing death by a thousand cuts to the Adelaide park lands belt,” says Iwanicki. “In the face of higher-density living, COVID and climate change, the new Planning and Design Code needs to protect the trees and green open spaces of the park lands, not rezone them for other purposes.”

So is it time for a new masterplan?

Perhaps the answer lies in Adelaide’s original riverbank plan – the one gifted to us by William Light. While Light anticipated some institutional buildings, the clear aim was to retain the banks of the Torrens as open public parkland accessible to all. It is remarkable that his inspired figure-of-eight design has survived nearly two centuries, and it would be a complete tragedy if that integrity is effectively destroyed as our city’s bicentenary approaches. 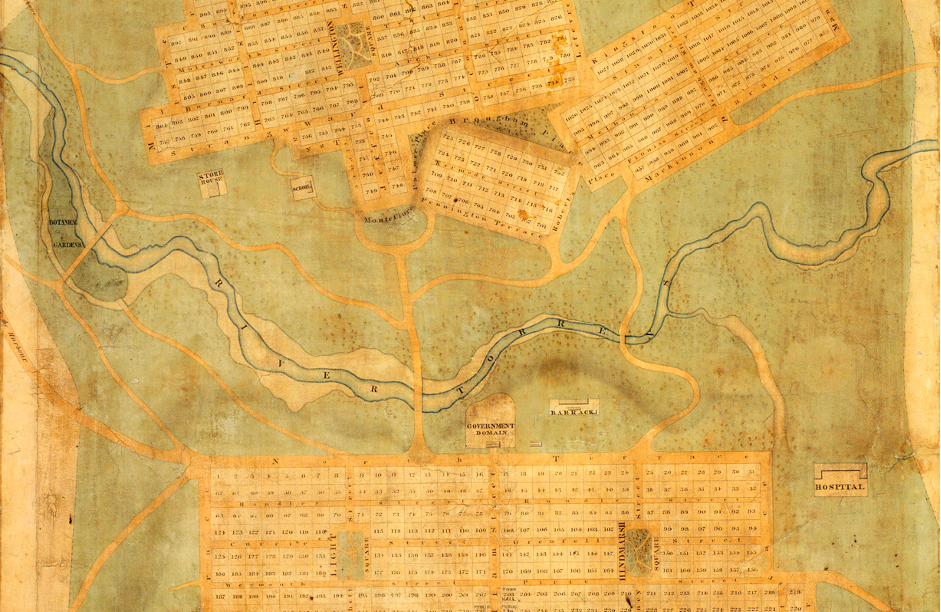