This is the second recent concert hall design by Maron, whose acclaimed record over more than 50 years of practice includes the Bicentennial Conservatory in the Adelaide Botanic Garden and the original City West campus of UniSA, but his new idea is particularly striking in its design and proposed location.

Maron wasn’t commissioned by any official bodies to produce the design; he’s developed the concept to create ongoing momentum for the idea of a concert hall to serve as a beacon for music performance and education in Adelaide.

The 1500-seat hall design is circular – meaning audience members would be close to the action – with the building’s grand entrance abutting the Festival Plaza to the south, and the northern aspect floating over public areas on the riverbank side, anchored by a single column. The external cladding materials are designed to match the current Festival Centre.

The concert hall’s design includes an interior circular public promenade, with views over the Torrens, with elevated galleries above the promenade for art and musical instrument displays. Behind the scenes, he has allocated office space for administrators, and heavy instrument stores.

Maron told InReview that despite Adelaide’s designation as a UNESCO city of music nearly six years ago, it remained the only capital city without a concert hall.

To fix this anomaly, he is calling his new concert hall design “The UNESCO Centre of Music”, with a vision for it to become a hub for education as well as a home to a range of South Australia’s fine music ensembles.

“Adelaide is the first and only designated city of music in Australia and member of the UNESCO Creative Cities Network,” he said.

“Despite this, and curiously, Adelaide is also the only (capital) city in Australia without a concert hall.”

He suggests the new centre should have the Adelaide Symphony Orchestra as the anchor tenant, with others such as the Adelaide Youth Orchestra, the Adelaide Chamber Singers, Young Adelaide Voices, the Artaria ensemble, the Australian String Quartet, the Seraphim Trio and Adelaide Baroque, also using it as a base.

In this way, it would be “much more than a concert hall but a centre of education as well”.

Maron wasn’t commissioned to produce the new design, rather he’s keen to continue to push the case for a concert hall for acoustic music performance.

The ASO has no permanent performance home, instead using the Adelaide Town Hall and the Festival Theatre as options when available. While the Town Hall has good acoustics, it suffers from poor backstage facilities and limited seating.

InDaily reported early this month that a  long-awaited draft scoping report analysing the need for an acoustic concert hall in Adelaide has been handed to the State Government and key arts stakeholders.

The report, commissioned by the State Government in June last year and completed by local architecture firm Baukultur, analysed the benefits of building a new concert venue in Adelaide to serve as a home for the Adelaide Symphony and youth orchestras.

The Government has promised to release the report “more broadly”, once it is finalised following industry consultation.

An illustration of Maron’s design, seen from the Festival Plaza entrance, with the Festival Theatre to the right and the Dunstan Playhouse at left. 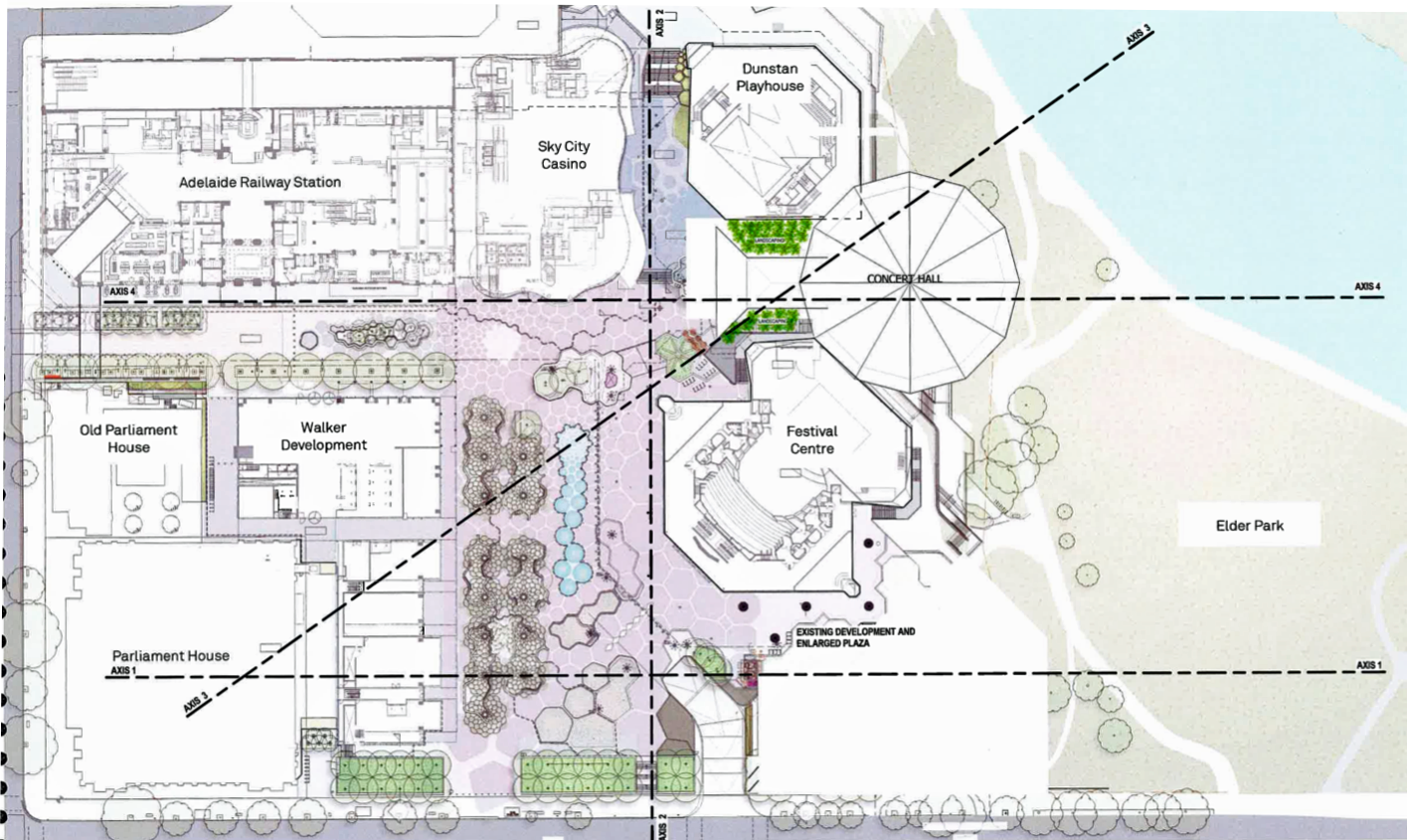 The proposed site plan for the plaza, with the concert hall between the two existing theatre complexes.

Maron has had a long involvement with South Australia’s so-far fruitless quest for a concert hall, saying he was first brought in by Liberal minister Di Laidlaw to consult on a feasibility study in the 1990s. That process was scrapped, due to a lack of funds.

In 2020, he released designs for a hall he saw being built on the Torrens riverbank.

He concedes his latest design would offer some challenges, including the fact it is proposed for the heritage-listed Festival Centre precinct.

However, he believes the concept would enhance the performing arts precinct.

“While there are many, many South Australians who support the need for the concert hall, the fact is that it would require an investment of some $150 million by the government and, with the current state debt, any construction could well be a long way off,” he said.

“But that doesn’t mean that those who will benefit – the ASO and others – should not continue to campaign for a home for South Australian music. I will!”

Maron told InDaily he had sent the designs to Premier Steven Marshall, who is also arts minister.

“It was a speculative submission from me to the Premier’s Department but I didn’t get any answer – no acknowledgment, not a word.”

At least at one point, Maron did have Marshall’s attention: he was asked to produce designs for the then Opposition Leader’s bold plan for an Aboriginal arts and culture gallery at Lot Fourteen, in the lead-up to the 2018 state election. 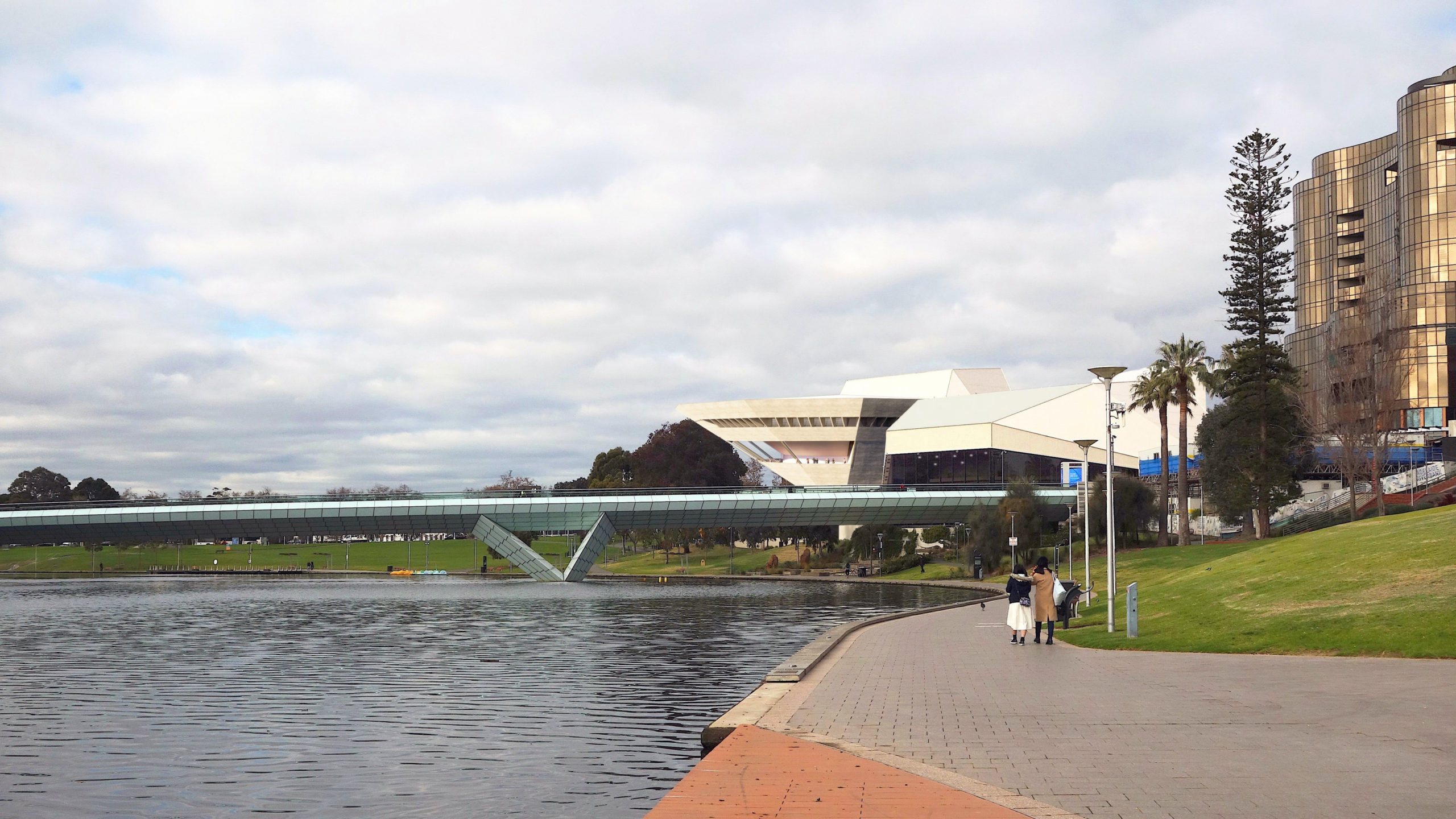 Maron’s image of the proposed concert hall, as seen from the west towards Morphett Street.

The ASO has advocated for many years for a concert hall.

Adelaide Symphony Orchestra managing director Vincent Ciccarello has previously said that such a venue should be “much more than just a high-quality auditorium for classical and orchestral music”, providing music education and community services “to become a home of music in South Australia”.

Once the scoping report is finalised, the Government will start developing a full business case that will analyse the viability of building a concert hall.

An underground, three-level concert hall was once included in early plans for Lot Fourteen at the old Royal Adelaide Hospital site, but the designs were never adopted by government.