There are false starts and non-appearances of the heralded star of the show before she eventually speaks from a spotlit corner of the balcony, as if lost. It immediately underlines Pandemonium’s intended meshing of comic irreverence with Meow Meow’s internationally recognised musical talent.

It seems obvious to say that the show lives up to its name, that the contents are as the label on the tin suggests, but that does not spoil the result. The first pleasure is in the way the sense of disorder and imminent collapse is maintained; a crafted suspense that encourages the audience to expect disaster despite knowing there is a great degree of control. This particularly applies to the physicality of Meow Meow’s performance.

The second pleasure is in her singing, which is vital and varied; soft and strong, where required, and delivered well even if you think she could be stressed from being manhandled, for instance. Did someone mention crowd surfing?

Speaking of being manhandled (and womanhandled), Meow Meow has the audience disrobing several layers of her clothing as she initially scrambles over their seats towards the stage. She vamps this up and arrives deliberately deshabille. There is no doubt that further participation will be called for later, and so it is.

Presented by the Adelaide Cabaret Festival and performed with the Adelaide Symphony Orchestra, led by celebrated conductor Nicholas Buc, Pandemonium is not tightly stitched to the cabaret era. The songs that stray are always welcome, for their arrangements, mood and delivery. They fit.

A streak of playfulness is woven through an accomplished rendering of the opening tune, the hit song “Boulevard of Broken Dreams”, and also in “Rinascerò Rinascerai”.

A flickering allusion to “On Broadway” leads to Jacques Brel’s “Ne Me Quitte Pas” (aka “If You Go Away”) and very funny hands-on capers with two conscripted members of the audience who are directed move by move on stage. 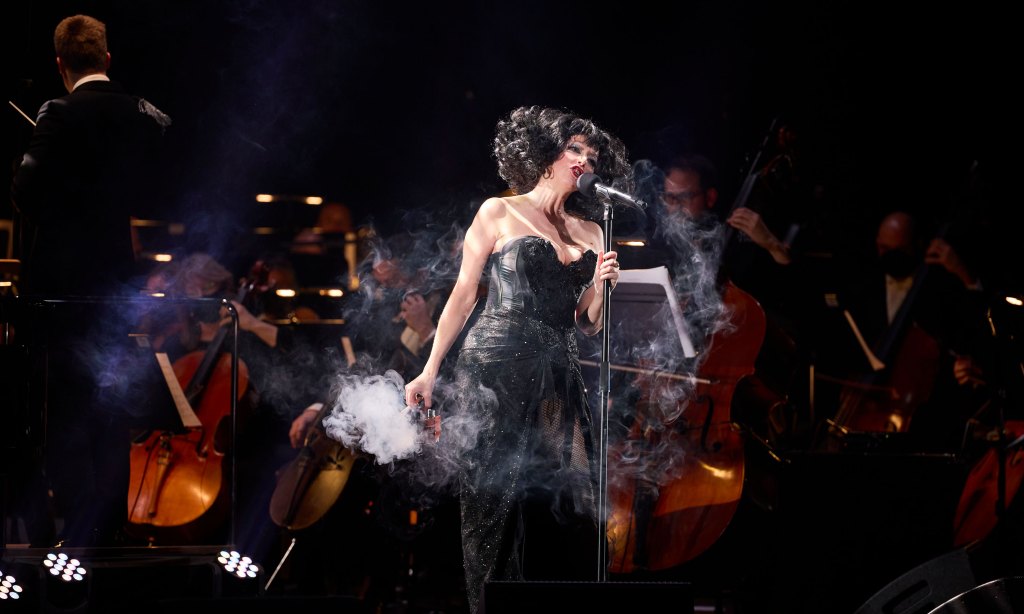 Among the other offerings is a very moody and riveting take on “Surabaya Johnny”, from Brecht and Weill’s musical Happy End, complete with smoke effects that Meow Meow herself produces from a hand-held device.

There is a dose of raunch and domination in all this, but subtlety as well. Meow Meow’s less blunt body language is fascinating, including slight and expressive gestures with her fingers while singing; a kind of choreography of the hands.

Meow Meow brings a well-deserved reputation to her own personal blend of vocal delights and humour. With constant quips, a mixture of mostly scripted but sometimes ad hoc responses, she is always on top of the situation.

If this show were to be return, it would definitely be worth grabbing friends and introducing them to Meow Meow’s finely-honed performance skills. Even those familiar with key elements of Pandemonium, which has played elsewhere with other orchestras, would likely fall under its spell all over again. It commands complete attention and appreciation.

A great night out.

Meow Meow’s Pandemonium played for one night only at Her Majesty’s Theatre as part of the 2022 Adelaide Cabaret Festival.