Titled Black and originally commissioned for the LGBT arts festival Homotopia in the UK, the performance has been variously described by critics as “sensitive and canny”, “upfront and poignantly personal”, and “life-affirming, inventive and beautiful”.

Here, Le Gateau Chocolat gives an insight into what audiences can expect from the show, what he hopes to achieve through his art, and the advice he would give “Little Black” if he could reach back in time.

Black is described as “an intimate and confessional show” – what are some of the struggles in your life that are brought to light through the performance?

The show goes through different chapters in my life, stretching right back to my childhood growing up in Nigeria, and focuses in on particular moments where I have encountered stigma, experienced depression – felt “black”.

For example, my weight and gender expression as a child – how I was treated because of it and how that impacted my confidence. Then coming to terms with my sexuality as a young person, and difficult experiences that came about alongside that.

I think we all encounter these kinds of struggles in our lives – where we are made to feel less than – and to some degree they can form our sense of self.

Most people are familiar with your very colourful and confident public persona – how difficult was it for you to reveal a different side, especially your battle with depression? What was the impetus to do so?

I use this vehicle to reveal and highlight our commonality, because before I’m a drag artiste, gay, black, overweight… I am a human being. To that end, talking about depression was right for this. I want to break down the stigma that surrounds this subject matter, even though one in three of us suffer from It.

The impetus was the loss of two friends to the condition and the inevitability of having to engage with mine.

Tell us about the musical repertoire for Black – what are some of the songs you use to relate your story?

The show boasts an eclectic mix of songs” Wagner, Gershwin, Purcell’s “When I Am Laid in Earth”, Nina Simone’s “Black is the Colour of My True Love’s Hair”, Whitney Houston, Bernstein and some original music. They all have emotional resonance, which makes performing them torturous and a delight sometimes in equal measure.

The show also introduces audiences to Little Black’s dreams … including his wish to be a synchronised swimmer. What other dreams did you have as a child?

I always enjoyed performing – I was one of those kids who are always jumping up to sing at family functions. I remember fantasising about singing in front of hundreds of people in huge theatres, dressed in some kind of lavish costume.

I didn’t really know anything about opera back then, but I dreamt about the same sort of scale and opulence. At that point, those dreams were more escapism than a realistic ambition – imagining holding the attention of everyone in that cavernous space, in stark contrast to a reality as a shy, chubby, effeminate boy in his sister’s swimming costume. 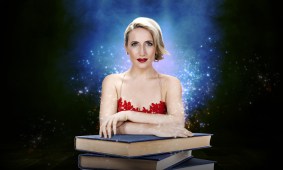 The fantastical world of Roald Dahl in song

If the adult you could reach back in time and give some advice to Little Black, what would it be?

Don’t let the attitudes of others make you fearful of being who you want to be or chasing down what you want.

Be patient with yourself and with the present; bruises heal, opportunities come along and you will eventually find your place.

Le Gateau Chocolat will present Black at the Dunstan Playhouse on June 22 and 23 as part of the 2017 Adelaide Cabaret Festival.