Yon will say that if it has guns, it works. Gatesy will say if there are squares on a screen – old school – then he likes it. Scod will say there’s safety in numbers; the numbers will help you know how the game will play out.

So if that last one sounds a bit obscure (and it shouldn’t if you think about it hard enough), it’s because you’re not a gamer, right? That’s where I fall. I wanted to go to see Tripod and have some laughs with my teenage son (who quite likes “games” but is perhaps not as intense as “gamers” are).  So is this a show for Tripod fans or for gamers, and is there a fine balance between the two?

The tuxes worn by the trio were a gorgeous touch. And the Adelaide Symphony Orchestra? Jeeze, my son saw them with the Hilltop Hoods in April and now this, so I do believe the boy is getting spoiled.

Austin Wintory (composer for games such Journey and Assassin’s Creed Syndicate) not only led the ASO but chit-chatted with Tripod in between songs, and even considered ousting one member to join the crew. Then there’s the epic lighting – this show is really big. 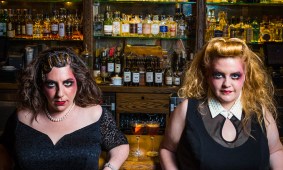 Mother's Ruin - A Cabaret About Gin

What is present in this show is the group personality that is Tripod: the loveable larrikins who have a great time making fun of themselves and each other while cleverly lyricising narratives. What is also present is the individual personalities of the three members that make up Tripod: one likes guns, one likes squares and one likes numbers; they all like each other.

What’s missing in this show is a universality that can take gaming to an audience who doesn’t game but just likes Tripod. But then, maybe it’s all an intervention for Scud and I should be more sympathetic.

Tripod performed one show only of This Gaming Life with the ASO at the Festival Theatre. The Adelaide Cabaret Festival continues until June 25.