Bodies of Light is a shattering novel, one that breaks and then rebuilds its readers. It was yesterday named the winner of the 2022 Miles Franklin Literary Award, the judges commending it as “a novel of affirmation, resilience and survival, told through an astonishing voice that reinvents itself from six to 60”.

Bodies of Light follows, richly, in their footsteps. Under interrogation-level lighting, it confronts the institutional “care” offered to the most vulnerable of people: little children, labile adolescents, and traumatised youth. Any society that routinely fails to provide children with the care they need to grow into secure adulthood is a society that needs a critical light shone on it. In the most lyrical, gentle language, this is precisely what Bodies of Light does. 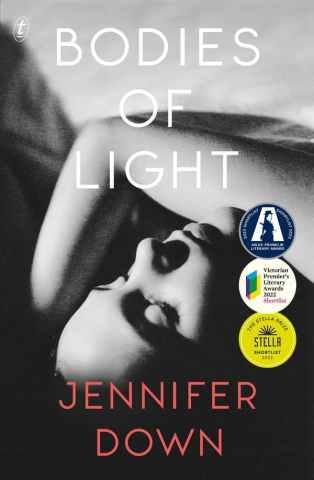 After losing her mother when she is only two, Maggie is cast first into the willing but incompetent care of her junkie father, then into the dubious care of the state. There is no one to stand up for her. Effectively, she becomes a synecdoche for all lost children in her heartbreak, loneliness, and sense of invisibility.

These are the experiences recorded, too, by those caught up in the Stolen Generations, in 20th-century orphanages, and in the community of those whose stories are threaded through the Royal Commission into Institutional Responses to Child Sexual Abuse and other investigations into institutional care.

Bodies of Light is beautifully written, but not an easy story to read, because it looks directly into the black hole of lost childhood. Maggie says “a black hole is not nothing […] It looks like an absence: it’s not visible as anything but a blankness”.

She recasts that blankness – the emptiness, the absence of love and hope and possibility – as light. Perhaps this is because she remains remarkably compassionate. She says, wistfully, of one selfish early boyfriend: “Ned. Why couldn’t you be kinder to her? Her. Girl-me.”

Yet she observes: “He wasn’t a monster, though; he was just taking what he thought the world owed him.”

Maggie does not hold to the belief that the world owes her anything. Indeed, she lives so tenuously that she is barely there at all – characterising herself, and being described by others, as an alien, a robot, a ghost.

Perhaps, then, it is not surprising that her many relationships prove to be unsustainable. Though she falls in love with several generous and affectionate people – in Australia, and later in New Zealand and then in the US – Maggie cannot give herself fully into the sort of trust and everyday comfort that she, and they, deserve. As she says, even when embraced by a lover: “I was always looking ahead to a time when I would miss this.”

Bodies of Light is a brutally precise portrait of the consequences of failure to provide children with the nurturing experiences they need to develop into functional adults. It brings to mind nothing so much as William Blake’s chilling binary in his Auguries of Innocence:

Maggie may have been born to endless night, but her “body of light” offers the possibility of transformation, of reversal. She manages to craft loving, albeit short-term, relationships as she moves across the world, re-crafting herself along the way.

She is a captivating character, and one worth a reader’s time. Through the desperate sorrows of childhood, through the heartbreak and loss of young adulthood, she eventually manages to build an ethical and liveable life. By story’s end, she has gathered enough tenderness and hope to become “secure in the knowledge of who knows me”.

Jen Webb is Distinguished Professor of Creative Practice in the Faculty of Arts and Design, and Dean, Graduate Research, at the University of Canberra. She is also a poet, specialising in prose poetry and material poetics.

This article is republished from The Conversation under a Creative Commons licence. Read the original article.

Read more: A touch of hope after the doom? Your guide to the Miles Franklin 2022 shortlist