Some books – and their characters – become your friends. At least, if you’re a self-identifying book nerd like me. Last week, I had a string of lazy conversations with real-life friends about our favourite book characters: the ones that once met, stay with you forever. My first choice? It’s hardly original, but Jo March has been my fictional soulmate since I was a kid. Impulsive, passionate, deeply unconventional. A reader and writer who’s somehow always saying or doing the wrong thing – but is always fiercely, if sometimes imperfectly, devoted to those she loves.

Despite my lifelong affinity with my literary namesake, I paused when my friend instantly claimed Edith Campbell Berry, the deliciously complex, witty, tender and cerebral heroine of Frank Moorhouse’s trilogy about the League of Nations (the precursor to the UN). Because, yes, Edith – who stars in the three novels Grand Days, Dark Palace and Cold Light – is a strong contender for my favourite character, too. (She’s also one of Annabel Crabb’s, Sophie Cunningham’s and Emily Maguire’s … and no doubt many more readers.)

This week, I’ve had cause to think about Edith again, as the news broke that Frank Moorhouse died last weekend. 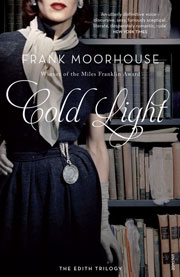 If you’ve somehow never met Edith, I urge you to! You will thank me. The first book, Grand Days, opens on the train to Geneva, where Edith – on her way to start a new job at the fledgling League of Nations, which she believes in as a means to prevent world war – meets “sexually unconventional” British diplomat Ambrose Westwood, who will become her greatest friend and sometimes lover.

Dark Palace (which opens with Edith relishing a spying mission, “dressed in a new, pale pink silk-satin Parisian evening dress”) takes the reader through the slow creep and devastation of World War II, which brings the eventual collapse of Edith’s beloved League. And Cold Light, the final book in the trilogy, moves from Europe to Canberra (beginning in 1950), where Edith finds herself struggling to regain the relevance she had at the League – and reuniting with her brother, a committed Communist. “She had moved from trying to make a world capital in Geneva to a dusty town that was trying to become a national capital.”

Moorhouse was a master of detail, from silk finery to the fine points of bureaucracy, and these books are studded with historical detail; they blend real characters, from Sir Anthony Eden to Gough Whitlam and Robert Menzies, with Moorhouse’s marvellous inventions. The novels are grand in scope, but also deliciously, vividly inhabited. They shine with Moorhouse’s fierce political and historical intelligence, and are also (this surprised me) wicked, sparkling social comedies of manners to rival Jane Austen, with galloping dialogue.

History has been high on my reading list this month. In my last bookshop shift, the book I kept pressing into customers’ hands every time they hovered at the history shelf was Lessons from History: Leading Historians Tackle Australia’s Greatest Challenges (NewSouth). It’s the kind of book you can dip in and out of, reading in order of interest – or that’s how I’ve been doing it anyway. And it’s packed with thoughtful, engaging, sometimes provocative essays that (as the subtitle suggests) use history to tackle today’s big questions or issues. 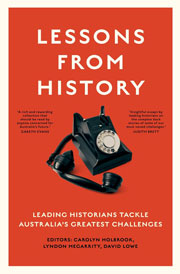 Hugh White’s essay on a potential war between the US and China – and how Australia should respond if it happens – has been on my mind for weeks now. White, an expert on China and Australian defence, looks at the seemingly inconsistent lessons of World War I (appeasement, to avoid another world war at all costs) and World War II (drawing the line before it’s too late, to avoid empire building) to assess where we should strike a balance between the two when it comes to China. It’s an intriguing exercise and a terrific read. White is also the author of the brand new current Quarterly Essay, on the same topic: Sleepwalk to War: Australia’s Unthinking Alliance with America (Black Inc).

I was also intrigued by Yves Rees’ essay urging us to rethink our attachment to linear, always-expanding “progress”, as part of our approach to the problem of climate change. They suggest looking at other ways of thinking about time, which may reset our priorities, and our sense of what is possible. “Aboriginal time is generally understood as cyclical and non-linear; it spirals in regenerative loops instead of shooting towards the horizon.”

And Mia Martin Hobbs’ essay, “Why soldiers commit war crimes – And what we can do about it”, is a forensic examination of the problems with military culture, including the glorification of the “warrior” and a worrying intersection with white supremacy. She doesn’t damn the military as an institution, but does make a strong case for reforming its culture. 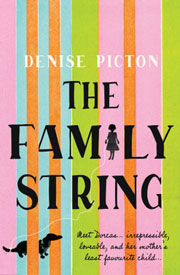 One new novel on my to-read list is Adelaide author Denise Picton’s funny, heartfelt novel about secrets, families and resilience, The Family String (Ultimo). Dorcas is a spirited 12-year-old struggling to contain her irrepressible humour and naughty streak in a family of Christadelphians – who, as dictated by their religion, avoid activities that are “not of this world” – in 1960s Adelaide.

Her mother’s least favourite child, Dorcas is always at the bottom of the order on the family’s string of beads that she and her younger siblings Ruthy and Caleb re-order according to their mother’s ever-changing moods. When their older brother Daniel is exiled to door knock and spread the good word in New South Wales after being caught making out with Esther Dawlish at youth camp, each try their hardest to suppress their dreams for a bigger life – but a chain of mishaps leads to a tragedy no one could have foreseen. Picton draws on her own upbringing as a Christadelphian, but her characters, she says, are entirely invented.

There must be something in the water this winter… Adelaide books with religious links seem to be all the rage.

I loved Holy Woman (Scribe), Adelaide journalist Louise Omer’s memoir of her journey from Pentecostal preacher (recruited as a teenager to the Paradise Assembly of God by a charismatic school chaplain) to feminist spiritual pilgrim travelling across Europe for answers. It’s passionate, open, intelligent and fiercely curious – and my Imprints colleague, Megan, will be reviewing it for InReview next weekend. I’ll leave it to her to dive into it with you, but must share one snippet in the meantime, from midway through Louise’s journey. “I was without anchor or harbour, stunned by what I’d lost, but also by what I’d found: Christianity wasn’t God-breathed, but constructed by men. The religion that was once so precious to me was shaped to reinforce patriarchy.”

I grew up in the same suburbs as Louise, near Tea Tree Gully, and I bone-deep recognised the culture she describes from her teenage days (albeit with a different soundtrack, as she’s a millennial to my Gen-X). That’s always a little treat: books that reference the north-eastern suburbs of Adelaide are rare. 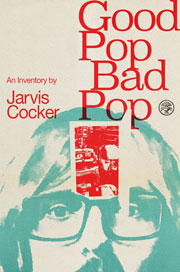 And speaking of (my) teenage soundtracks… did you know that Pulp frontman Jarvis Cocker is the latest rocker to release a memoir? Well, a memoir of sorts. Good Pop Bad Pop: An Inventory (Vintage, hardback) tells the story of Cocker’s sensibility, and the ephemera that made him, rather than chronicling the events of his life.

Like many Gen-Xers, I first encountered Pulp through their song “Common People” – my favourite dance-floor anthem in 1995, when I’d emerge from a basement nightclub off Hindley Street to eat McDonald’s at 4am before starting work at my Rundle Mall bookshop job at 11am (that stamina is long-gone). But the only reference to Pulp’s smash-hit is Cocker’s acceptance letter to Central Saint Martins School of Art and Design in London, annotated with “ran slap bang into the subject matter of The Song That Made My Name”.

Good Pop Bad Pop is not about fame and fortune, but about the quotidian details that came together to form him as a person – and thus fed into his art. For example, there’s a pack of Wrigley’s Extra gum, a cardboard joke version of Margaret Thatcher’s handbag, a copy of The Fantastic Dirty Joke Book. And from these objects, he recalls his emerging aesthetic, plans for the band he’ll one day form, adolescent self-creation, and childhood.

These are just a few of the books I’ve befriended – or have plans to befriend – this month. And there’s a slab of books due to come out in the second half of 2022 that I’ve been hibernating with this winter and can’t wait to tell you about.