Sometimes, you open a book and you see yourself in it. A character who seems to speak in your voice, or whose thoughts unspool along a similar thread to yours. A major life event you’ve experienced, or an identity you inhabit, articulated better than you’ve ever managed to – even to yourself.

Sometimes, though, it’s something small. Like when I opened Mark Hodkinson’s No One Round Here Reads Tolstoy: Memoirs of a Working-Class Reader (Canongate) and immediately identified with his book-hoarding tendencies – teetering piles of books in every room.

“I had no idea that 3500 books (and ever rising) was an especially large number,” he writes on the opening page. “The same as I thought having one book in my childhood home wasn’t particularly unusual either … We are what we are, we do what we do, and it takes others to point out deviations from ‘normal’.”

Indeed. I still remember the time a mother from my son’s primary school explained the concept of personal taste to her son by saying, Jo thinks bookshelves all over the house look good, in a tone that suggested she didn’t. It had never occurred to me before that anyone might think copious bookshelves a design flaw. (Over a decade later, I’m still baffled.) 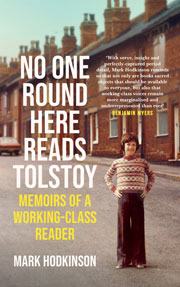 Hodkinson, whose parents were alarmed by the reading habit that marked him as different, fell properly in love with books after randomly picking JD Salinger’s The Catcher in the Rye off a pharmacy book stand. “Within the first few paragraphs, it felt like a letter sent exclusively to me.” (He would go on to become a publisher, and commission and edit a major biography of Salinger.) His memoir is a charming, passionate tribute to books and reading, the inner life they nourish, and the community they offer to outsiders like he was – from the perspective of someone who discovered books in the same way they discovered punk music (another passion): as rebellion.

Our bookshop customers seem to (mostly) agree that collecting books is an evident good. On a recent rainy Saturday, I had a conversation over the counter with a woman who described going to great lengths to appropriately re-house the large book collection, partly in Dutch language, that her mother-in-law had left behind, as carefully as one would a much-loved pet. “At least she’ll know I tried,” she said as she left, carrying a paper-bagged new book for her own collection.

Another Saturday, I was enthralled by the story of a trawler captain who’s collecting oral histories of shipfarers’ stories for an audio project – and stocking a “captain’s shelf” of books of tall tales and adventures for people to read on his vessel. Stories, one by one, carefully selected as a means of maintaining and creating shared community. 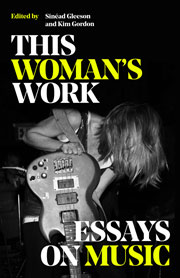 This Woman’s Work: Essays on Music (Hachette) is another exercise in community-building through shared stories. Co-edited by iconic musician Kim Gordon, best known for her pivotal role in Sonic Youth, and critic Sinead Gleeson, who each contribute an essay, it features an enviable line-up of women writers – including Anne Enright, Ottessa Moshfegh, Rachel Kushner, Yuyun Li, Margo Jefferson and Leslie Jamison. In the introduction, musician Heather Leigh writes: “These essays are more scores than explanations, pieces that honour the music and are rooted in autobiography to get closer to it; rich articulations of experience.”

Margo Jefferson reflects on the genius of Ella Fitzgerald. Kim Gordon interviews a former collaborator in the band Atomic Kitten. Sub Pop Records CEO Megan Jasper remembers her days as an intern, then receptionist, at the label during the “grunge” era, when bands (like the Screaming Trees) would help stuff singles into jackets and Kurt Cobain revealed himself as “a dirtbag with a gentle touch”.

Fatima Bhutto writes about music as a threat to dictators, and a comfort to exiles. And Anne Enright, in her fan letter to Laurie Anderson, rejects the idea of music as identity formation in favour of pure, private experience. “I can’t tell you how difficult I find the music conversation – the one where people gather into tribes… Music undoes me. It does not tell me who I am. It is something I listen to on my own.” 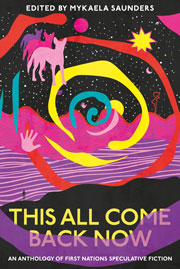 Mykaela Saunders, editor of This All Come Back Now: An Anthology of First Nations Speculative Fiction (UQP), reflects on her love of mixtapes in her introduction. This anthology is the first entirely dedicated to Aboriginal and Torres Strait Islander speculative fiction. “Short story anthologies are like mixtapes,” Saunders writes, “… a way to sample new worlds.”

This All Come Back Now is another collection with an impressive set-list (to use another music analogy). Contributors include this year’s Stella Prize winner Evelyn Araluen; Alexis Wright; South Australia’s own Karen Wyld; Lisa Fuller, who just won two Aurealis Awards (for her stories in the anthology Hometown Haunts), and Adam Thompson, whose acclaimed debut short-story collection Born Into This was published last year.

Saunders is biting about the history of speculative fiction’s hostile portrayal of First Nations characters and cultures, “while mining our cultures and pillaging our spirituality to trade in tired themes and tropes”. This anthology – written, edited and designed entirely by Aboriginal and Torres Strait Islander people – takes back control. “Spec fic, as a Western genre, employs devices that our cultural stories have dealt in for millennia – the difference is, to us these stories aren’t always parsed out into fiction or fantasy, as they are often just ways we experience life.”

Recurring themes include family and other kin, corporate greed, the destruction of land and water, technology, ghosts and hauntings. Saunders and her contributors recast speculative fiction through a blackfella lens, from a perspective where violent apocalyptic invasion and colonisation are “stone-cold reality” rather than fantasy. 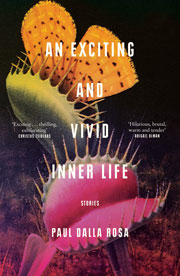 Melbourne author Paul Dalla Rosa’s short-story collection, An Exciting and Vivid Inner Life (Allen & Unwin), ranges around the world in its settings, but shares a focus on the alienation of contemporary Western life – whether lived by a would-be self-help guru chasing Buddhist monks in Tibet, an LA-based Australian actress more famous for her #MeToo payout than her work, or disenchanted retail or call-centre workers eking our minimum-wage existences while craving the comforts of material rewards (on credit they can’t afford). The cool, crisp nihilism of these stories, laced with bone-dry black humour, evokes a more compassionate Bret Easton Ellis.

In one standout story, “Short Stack”, socially awkward 19-year-old Sam spends money he doesn’t have on his favourite cam boy, ShyGuy18 (an aspirational version of himself), as various credit bills dizzyingly accumulate – even after he takes double shifts at his job at the Pancake Saloon. It’s heartbreaking to watch him pour his hopeful enthusiasm into monetised relationships – his job, ShyGuy18, aspirational online purchases, even his phone interactions with debt collectors – that have no investment in him as a person.

Sometimes, as in this case, a book reflects not so much yourself as the society you inhabit. Dalla Rosa does an eerily effective job of showing us how the digital consumer society we’ve built connects us as never before – but so often fails to look after our deepest needs, especially security (in every sense).

“I thought I was the only one, or near enough,” wrote working-class reader Mark Hodkinson, who came of age as UK prime minister Margaret Thatcher declared there to be “no such thing as society” – a step, it seems, on the path to the world Paul Dalla Rosa captures in his collection. “I had no idea that I had forged a union with millions of others across the globe by simply reading a book.”