I missed my last bookshop shift: I was in iso, of course. Which was once an unusual story in Adelaide – now, it’s commonplace. The only good thing about being stuck in the house while the autumn sky beckoned golden-blue outside (and as we ran out of cooking oil, so I served my Covid-stricken husband toast for dinner) was that I caught up on my reading.

The first book I devoured was one I’ve been longing to read for months, but had put off due to its bulk: Andrea Elliott’s Invisible Child: Poverty, Survival and Hope in New York City (Hutchinson), a gripping work of narrative journalism that follows a black Brooklyn family over eight years, focusing on charismatic eldest child, Dasani. We first meet Dasani aged 11, sharing one decrepit room in a homeless shelter with her family of 10 – mother Chanel, stepfather Supreme, and seven younger brothers and sisters – and on the brink of starting middle school, where she’ll encounter teachers who’ll see something special in her, despite her fierce fighter surface. If Invisible Child were a movie, this would be a path to redemption.

And at first, miracle redemption does seem to be on offer (perhaps due, at least in part, to the author’s 2013 front-page New York Times series on Dasani and her family), with Dasani’s 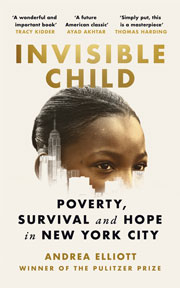 admittance to the Hershey school for children in need. Founded by America’s chocolate mogul, Milton Hershey, who grew up in poverty and left most of his fortune to the school, it provides students with generous housing, clothing, food, and even college funds if they graduate. But while Dasani thrives at first, back home, her family falls apart under the pressures of chronic generational poverty, including addiction, the inadequacy of slum housing, mental health pressures, and charges of neglect that stem mainly from Chanel and Supreme’s inability (as opposed to unwillingness) to provide their children with basic needs.

Invisible Child, published here in February, has had little attention in Australia, but in the US, it was selected as one of the New York Times’ best books of 2021, and it was one of Barack Obama’s books of the year. I will be shocked if it’s not at least shortlisted for the US National Book Awards this year. Not only does this book have the narrative drive and intricate, authentic character detail of a novel, but it brilliantly details the often hidden complexities of breaking cycles of disadvantage – most powerfully, the inherent problems of offering social solutions that treat intersecting problems (like addiction) individually, fail to value community and culture, and separate families. I haven’t read a book so compelling and wise since Matthew Desmond’s Pulitzer Prize-winning Evicted: Poverty and Profit in the American City.

In another effort to understand the world better, I’ve been re-reading a much-loved book, Otherland: A Journey with my Daughter (Vintage, 2010) by Ukrainian–Jewish–Australian author Maria Tumarkin, best known for Axiomatic, her internationally acclaimed 2018 book exploring how the past shapes the present. (It was one of the New Yorker’s top 10 books of 2019, among other accolades.) Maria was born and raised in Kharkiv, the second-largest city in Ukraine: the ferocity of its attack by Russia is currently being compared to Aleppo in Syria and to Stalingrad. She is currently raising funds for the Ukrainian crisis appeal.

In Otherland, Maria journeys back to the Russia and Ukraine she and her family left in 1989, when she was 15 (when Ukraine was still part of the USSR), with her 13-year-old daughter, Billie. In this book, she wrestles with the gaps between the Russia and Ukraine in which she grew up and became herself, how these places evolved post-1989 and shaped the people who remained, and how she changed in those years, influenced by a blend of her USSR roots and her new Australian home. A crucial element is her mission to immerse Billie 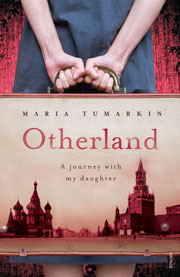 in her past before it is too late – for her to understand where she came from. Of course, willful teenaged Billie has her own responses along the way, some of them gratifying, some surprising, and some intensely frustrating. So, this book is also about mothers and daughters, and about how our children are both intrinsically part of us and their own separate people.

Because Maria is a cultural historian, as well as a startlingly original writer and thinker, this is not “just” memoir or “just” travel – it’s also interspersed with deep dives into history and culture, from a visit to the site of the horrific 1941 Babi Yar massacre in Kyiv, one of the largest mass shootings of Jews in occupied Europe, to the tribal appeal of musician Boris Grebenshikov (described as Leonard Cohen, Elvis and Jesse Helms in one) for her generation of teenagers in 1989. This is a book rich with cultural references: poets, novelists, historians and philosophers. It is a book I have looked for, wanting to understand more of the context for what is happening now. Reading Otherland, I feel like I am connecting with the Ukrainian soul.

The last section of Axiomatic, too, engages with Ukraine and how a place shapes its people – it’s a parallel narrative between Maria and her childhood friend Alexandra (named Sasha in Otherland), beginning with them both in Kharkiv as teenagers, and evolving in parallel as Alexandra stays, and Maria’s life unfolds elsewhere, in Melbourne.

I have to admit that it was sometimes tough to read Deadly Quiet City: Stories from Wuhan, Ground Zero (Hardie Grant), by Chinese writer Murong Xuecun, as my husband coughed and wheezed beside me in bed, with Covid. But it was also illuminating – not just about what happened in the first days of Covid, but about how the actions of the Chinese government exacerbated the problem by trying to pretend it didn’t exist. Murong Xuecun travelled to Wuhan in April 2020, just a few months after Wuhan was officially locked down in January of that year, and interviewed ordinary people to collect their stories. Here, he profiles eight ordinary citizens, from a doctor, Lin Quiangchan, forced to work while infectious with Covid, and a hospital 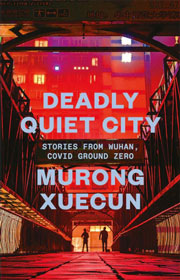 cleaner, Jin Feng, whose husband is refused transportation to hospital while vomiting blood because he doesn’t have the appropriate documentation, to an illegal taxi driver and a citizen journalist.

Eerily, the suffering of powerless ordinary people due to bureaucratic inaction that defies both logic and empathy in the contemporary China of Deadly Quiet City echoes some of the trials faced by Dasani’s family in Invisible Child. (For example, the children go hungry when their mother is legally banned from the house due to drug-taking, yet the government takes four months to transfer the family’s food stamps to their father – a major contribution to a charge of neglect.)

The disadvantage trap is similarly central to Paddy O’Reilly’s beautifully crafted Other Houses (Affirm Press), an intricately observed, often dryly funny, deeply affecting novel with a cracking forward momentum. Cleaner Lily and her factory-worker partner Janks live paycheck to paycheck in moneyed-bohemian Northcote, migrants from Broadmeadows in search of a better life (and a good school) for Lily’s teenage daughter Jewlee. They’re grateful for their steady jobs, content with each other and proud of the way Jewlee has evolved from a deliberately tough wildcat to a calm (if casually entitled) girl who’s learned manners and does her homework. But while we find Lily and Jewlee at home in front of the TV as the book begins, former addict Janks is lured into an impossible bind by old acquaintances, after one wrong move – and parallel narratives are kickstarted, with Janks struggling to make his way home while his family wonders where he is… and what he’s involved in.

This is Paddy O’Reilly’s sixth book, and her experience shows in its assured polish, layered emotional texture and quietly acerbic social commentary. Sharp-eyed Lily’s portraits of the houses she 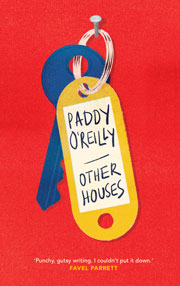 cleans, and the (mostly affluent) lives she discerns there are fascinating, and contrast with her own life and that of her best friend and colleague Shannon, in sometimes unexpected ways. Privilege, this book expertly suggests, doesn’t always make life better – there’s a single mum GP with a tribe of horrific kids, and a miserable teenager in another house acting out for attention – but it does increase the chances that it will be easy to navigate. Money is not everything, but it’s certainly not nothing either. O’Reilly prompts the reader to question what these characters gain and lose by moving from the community they once belonged in, to become outliers in a more privileged place. And, this novel asks, is there a place to draw the line?

Finally, Toni Jordan’s Dinner with the Schnabels (Hachette) is a sparkling, clever novel about love, family and (again) class and money, set in post-lockdown Melbourne. We open with middle-aged Tansy Larsen, married with two kids, talking to a lawyer about considering divorce. And then we meet her adoring husband Simon, an unemployed former workaholic who lost his business – and the family home – during Covid, as they sit at the train station waiting to glimpse the half-sister Tansy has never met, in town for their father’s memorial service. Throw in Tansy’s terrifying Type-A mother and the service in seven days, with Simon tasked to 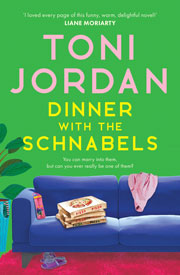 transform the venue (Tansy’s best friend’s back garden – currently a disaster) in time for the big event, and we have a plot! The heart of this charismatic novel, though, is Simon and Tansy’s relationship, and the functioning of their family unit, now squashed into a two-bedroom unit in a block of flats, with Tansy working and Simon parenting (somewhat ineptly) as he battles shame about their situation. Nothing is quite what it seems, though.

Toni Jordan is at her best here, rivalling Liane Moriarty (a fan) with her comic skewering of social mores, pacy plot, sharp characterisation and sly questioning of contemporary values.