January is a quiet month in the bookselling world. Not much is published in these early weeks of the year, as Australians traditionally emerge – sleepily, possibly sun-browned – from summer holidays packed with family feasts and some kind of water immersion, back into an everyday life of work days and school preparations.

This year, January has been especially quiet in the bookshop on Hindley Street, like the rest of the CBD. Conversations with customers inevitably include masks and border openings and case numbers… though we’re all just as (even more) happy to talk about the last book you read.

To Paradise (Picador, $32.99), though very different in scope and subject, again primarily inhabits the lives of queer men – across three centuries, in three loosely connected sections, joined by their location (a townhouse in Greenwich Village’s Washington Square Park) and the themes of illness treated at a terrible cost, the chasm between rich and poor, the definition of family, race and more.

The first section is set in an alternate version of 1893, where the post-Civil War US has been divided into territories with differing views about Black and queer rights. In New York, one of the Free States, a wealthy, emotionally unstable young man lives with his grandfather and resists an arranged marriage (to another man). In the second part, set in 1993 during the AIDS epidemic, a young Hawaiian man lives with his much older, wealthier partner, hiding his troubled childhood and the fate of his father. And in 2093, in a world ravaged by a series of plagues, a researcher, Charles, helps the government introduce a series of increasingly totalitarian regulations – while trying to protect his disabled granddaughter.

In an admiring Washington Post review, Ron Charles says: “This final section is a blistering analysis of what an endless cycle of pandemics can do to a society. With allusions to the AIDS epidemic, Yanagihara illustrates the way, given a surfeit of fear, acceptance of others gradually reverts to deadly prejudice.”

Like they were with its predecessor, reviews of the book are divided. For example, while the Guardian called it “a masterpiece”, New York magazine ran a long hit-piece criticising Yanagihara for torturing her characters, likening it to a kind of tourism of suffering. Me? I am intrigued, and waiting for my next stretch of summer days with a book so I can dive in and make up my own mind.

It feels like this January has also been a time for saying goodbye to cultural heavy-hitters – which often prompts me, like so many of us, to revisit their work. Joan Didion, who died on December 23, enthralled and influenced generations of aspiring writers with her deadpan, cut-glass observational prose (just as she herself was inspired by Ernest Hemingway), and her talent for channelling mood – at once deeply felt and meticulously detached – onto the page. Unsurprisingly for someone who got her start at Vogue (after winning an essay competition, she worked her way up to associate features editor), Didion is as known for her minute, butter-smooth catalogues of style (a silk paisley dress with its hem coming undone, Jim Morrison’s tight leather pants with no underwear beneath) as her hero Hemingway was for bullfights and guns. 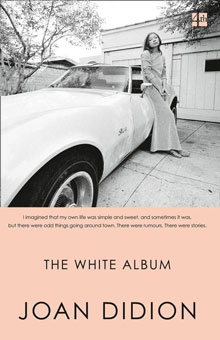 The widespread hero worship has been contested, especially in recent years, with criticisms of her privileging style over substance, and reminders that as a young voter, she found Richard Nixon too liberal for her views (while her politics moved left and she would go on to condemn the Vietnam War, she always seemed beguiled by wealth and power). Didion was always unashamedly elite. And her cool bordered on cold. For example, there’s the infamous moment in the Netflix documentary on her, The Centre Will Not Hold, when she is asked about her reaction when she found a five-year-old child taking LSD while researching the California counterculture – she called it “gold”. (Yes, of course, but…)

Again, I can see the validation of the criticisms. But I am also an acolyte, with a bookshelf of Didion essay collections, memoirs (and a couple of novels, one unread), and – I admit – I would kill to achieve that alluring prose style, that mastery of telling detail, and the elegantly phrased gems of insight.

A couple of people have asked lately, on social media, where to start if they want to read Didion for themselves. I would recommend the essays, particularly Slouching Towards Bethlehem and The White Album (both Fourth Estate, $19.99), which brilliantly document the California counterculture, and the mood of 1960s and ’70s America. They also include gems of devastatingly true-feeling personal reflection that I, a fellow neurotic overthinker, have cherished – see “On Self Respect” and “On Keeping a Notebook”. In the latter, for instance, I have often revisited these lines, in favour of self-reflection: “I think we are well advised to keep on nodding terms with the people we used to be, whether we find them attractive company or not. Otherwise they turn up unannounced and surprise us, come hammering on the mind’s door at 4am of a bad night and demand to know who deserted them, who betrayed them, who is to make amends.” 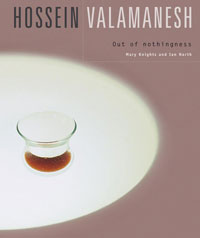 Closer to home, South Australian Iranian artist Hossein Valamanesh died on January 15, shortly before he was due to exhibit his work, with his wife Angela Valamanesh, in the Adelaide Biennial of Australian Art: Free/State at the Art Gallery of South Australia. Together, the pair have created several works of public art. One you’ve probably passed and admired on North Terrace is 14 Pieces, a water feature outside the South Australian Museum, inspired by the opalised vertebral column of an extinct marine reptile, Ichthyosaur, which is held in the museum’s collection.

Hossein Valamanesh: Out of Nothingness (by Mary Knights, Ian North and Hossein Valamanesh, Wakefield Press, $49.95 HB) is a beautiful art book showcasing the work of this renowned artist, whose work was inspired by Persian poetry and Sufi philosophy, and was often made with elemental substances, natural materials and found objects.

From the age of 10, Copley grew up at St Francis Anglican Home in Port Adelaide, where his mother brought him to be educated – with Charles Perkins, John Moriarty (the first Indigenous person to be selected for the Australian national soccer team) and Harold Thomas (who designed the Aboriginal flag). I was privileged, in my time at Wakefield Press, where I was associate publisher until the end of last year, to read a manuscript of Copley’s biography, told to writer Lea McInerney, which I found deeply moving. (Sadly, Wakefield didn’t win the bid to publish it – I will be watching the bookshop for it in future, though.) 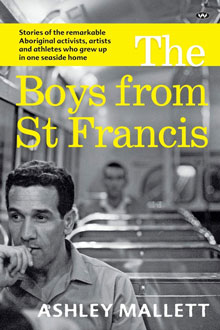 In 2019, Wakefield Press had worked with Copley on a previous book, a marvellous narrative history of the Indigenous boys (now men) who grew up together at St Francis, charting their time there as boys and following them as men who would make their marks on the world. Vince wrote the foreword to The Boys From St Francis: Stories of the Remarkable Aboriginal Activists, Artists and Athletes Who Grew Up in One Seaside Home (Wakefield Press, $34.99), and was quoted throughout the book – including a fantastic story about the time he and lifelong friend Charlie Perkins (who he joined on the famous 1965 Freedom Ride) befriended Muhammad Ali in Kuala Lumpur. The book was written by another high-achieving South Australian who we lost last year – former Test cricketer Ashley Mallet, who Copley met through his instrumental role in organising the 1988 tour of England which commemorated the first Aboriginal Australian tour of 1868 (Mallet wrote a book about that original tour).

Copley wrote in that foreword: “The Boys from St Francis is a story which exposes all the emotions – sadness and joy; achievement and failure; love and hatred; humour and hope; bigotry and strength”, concluding that “all Australians should read” it. I am clearly biased, but it’s one of those books I’m proud to have worked on, which revealed to me an extraordinary hidden episode of South Australian history. And it’s very much on my mind this month.