It’s hard to choose what to talk about this month … there so many great books I’ve either been lucky enough to read in advance, or am desperate to read. 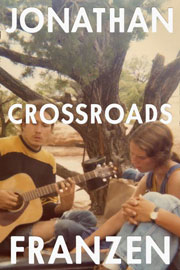 A month ago, Jason practically dared me to take home our advance copy of Jonathan Franzen’s latest brick of a novel, Crossroads (Fourth Estate). I did, but haven’t got to it yet. (I was daunted by Jason telling me it was “a thousand pages”, but it turns out he was exaggerating. It’s just under 600 pages long.) Early readers and reviewers are saying that this sprawling family novel, the first of a projected trilogy, is a return to the glory days of Franzen’s breakthrough mega-hit The Corrections.

Starting in 1971, Crossroads watches the ’70s unfold through a liberal Chicago pastor and his family. The parents are restless in their marriage, son Clem shatters his pacifist father with the news he’s enrolled to fight in Vietnam, high-school queen bee Becky has become a passionate acolyte of the counterculture, and brilliant youngest son Perry has stopped selling drugs to seventh graders and vowed to become a better person. New York Times reviewer Dwight Garner calls it “a mellow, marzipan-hued ’70s-era heartbreaker… warmer than anything he’s yet written”. I think I will be cracking the spine very soon.

One of the novels I was reading instead this month was acclaimed Melbourne writer Jennifer Down’s extraordinary Bodies of Light (Text), her third work of fiction – and set to be the book that (surely) breaks her through to a wider audience. 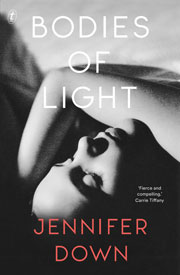 Down brilliantly inhabits the life of her narrator, Maggie, from a brief early childhood with her itinerant motel-dwelling father to residential care at the age of five, to foster homes interspersed with more residential care, to adulthood. In the opening pages, we discover a middle-aged Maggie has long since changed her name and left the country. “I became a new person a long time ago. I’m more outer-suburban folklore than great unsolved mystery.” But though we’re teased with the knowledge that Maggie (now Holly, previously Josie) is fleeing criminal accusations, it takes a long time to discover exactly what happened, and what her culpability might be.

Bodies of Light is told through a mosaic of impressions, sense-memories, and threads of narrative memory, always circling back to the present. There are birthday candles in a pie, lit with a Bic lighter; a visit to McDonalds after a confusing examination by a welfare worker; going to the ballet on acid as a uni student; the thrills and disappointments (both intensified by a background of trauma and neglect) of falling in love or friendship. Tender and spiky, evocative and engrossing, this gorgeous novel will break your heart and linger in your brain. Though the fragility and power of love, loss and connection are its beating heart, it’s also an indictment of the way our society and institutions fail our most vulnerable citizens – sometimes despite our best intentions. 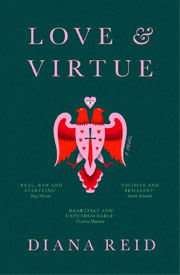 The other Australian fiction I fell in love with this month was Love and Virtue (Ultimo), a charismatic, wryly observant campus novel that explores love, friendship, ethics, sexual politics and growing into yourself. Diana Reid’s debut novel has already been compared to Sally Rooney (including by Sorrow and Bliss author Meg Mason), and I get it. Like Rooney, Reid immersively channels clever, insecure young women, and their complex dynamics – with themselves, each other, and the men they date. But I have to confess that I read Love and Virtue straight after Rooney’s latest, and immediately thought, Yes! This is what I actually wanted from Rooney! While Reid’s characters are painfully awkward and self-conscious, the book itself never is.

Carefully self-curated Eve – beautiful, wealthy, and nonchalant about both – has “high, prominent cheekbones that assert themselves like convictions”. Narrator Michaela, a middle-class scholarship girl, falls into friendship with her in their first days at Sydney Uni. They live in a residential college that continues the private-school networks of coded privilege that most of the residents have just left behind – along with murky problems of misogyny and uneven power relations. There’s a drunken O-Week encounter that will later explode in scandal, a dangerous crush on a philosophy professor, and a seriously problematic co-opting of other people’s experiences to make a point.

More than anything, Love and Virtue actually reminded me of Curtis Sittenfeld’s achingly incisive, black-witted insider-outsider college novel Prep – with its exploration of sex and power thematically echoing Helen Garner’s The First Stone.

I am picky about how-to writing books (I have an allergy to anything with an air of self-help, with a few notable exceptions). But I adored Charlotte Wood’s The Luminous Solution: Creativity, Resilience and the Inner Life (Allen & Unwin). 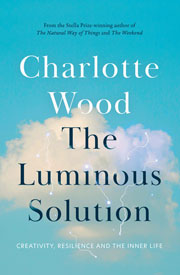 I’m a long-time fan of Wood’s fiction, and I know she’s sharp, practical and no-nonsense, as well as deeply reflective – which seemed like a promising combination for this kind of book. Drawing on her own experience as a writer and reader, research she’s conducted on the way other writers work (both informal and formal), and insights from engaging with other artforms (painting, acting), this is a series of useful reflections on the theory and practice of writing that had me taking notes as she read. There are notes on taking inspiration from objects, persevering through writers’ block, allowing yourself to take risks and experiment rather than only focusing on what you know you can do well, and anger as creative fuel.

And there are deeper, more philosophical threads – like a chapter on how her childhood Catholicism gave her the boredom (during church outings) to first indulge her imagination, and taught her to hold two contradictory ideas at the same time. “This is what art does, where it lives: in the uncomfortable, often lonely space between one certainty and another.”

Another chapter, provocatively titled, “Reading is not shopping”, argues that while we tend to be drawn to art that is like what we’ve enjoyed before, or that reflects us back to ourselves in some way, there is a value in engaging with the difficult and unknown. “The unknowable and uncomfortable, the friction of these things, is the grit that gives birth to the pearl.”

Throughout, Wood pushes back against the pressure to deliver an end-product that will please consumers and meet the demands of the market, instead encouraging the kind of art that grows from grappling with concepts and ideas. Art that serves the artist within, not an ideal reader. Her ideas are not just inspiring or useful in a practical sense (which they sometimes are), but serve as a reminder for why we make creative work, and what it can do for us in a personal sense, rather than in terms of measurable career outcomes. I know I’ll return to this book, over and again. 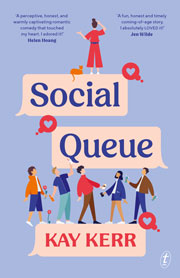 I should also give a shout-out to two terrific new young-adult books I read and loved this month. Social Queue (Text) is the second own-voices autistic YA novel by Queensland writer Kay Kerr, whose 2020 debut, Please Don’t Hug Me, I loved. A rom-com with a serious side, it’s both great fun and deeply touching. When autistic journalism student Zoe Kelly takes an internship at an online magazine, she finds herself becoming the story after her blog post about the trials of dating while autistic (and her belief that no one has ever had a crush on her) goes viral. A handful of romantic contenders write in to say they had a crush on her… and she decides to date them in turn, find out what signs she missed.

Social Queue has vibes of 2000s journalism rom-coms like How to Lose a Guy in Ten Days and Never Been Kissed (without the problematic elements). It’s funny, charming, and terrific on the ways in which it’s harmful to be who you think others will want you to be, and the problematic parts of formula romance. 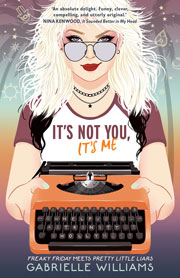 It’s Not You, It’s Me by Gabrielle Williams (Allen & Unwin) is billed as Freaky Friday meets Pretty Little Liars. I’ve never seen the latter, but yes to the former (the film version, with aspiring rock-star Lindsay Lohan and uptight mum Jamie Lee Curtis) – with a shot of Back to the Future. When Melburnian art teacher Holly Fitzgerald gets a vintage typewriter for her 40th birthday in 2020, she wakes up in the body of LA wannabe rock-star teenager Trinity Byrne in 1980. And the same typewriter is in Trinity’s bedroom, brand-new… and seems to be the key. There’s a potential kidnapper on the loose, a boy-next-door love interest, a celebration of ’80s female punk musicians (Blondie, The Runaways, Siouxsie Sioux), a nuanced exploration of families, nurturing and neglectful, and the question (of course) of how they get back to their own bodies.

Melbourne bookseller Williams, who has several successful YA novels under her belt, is such a skilful  – and joyful – writer, and she perfectly calibrates both the time-travel/body-swap element, and an intricate and often surprising plot. I wanted to enter the world of this novel… and in fact, I started it one Sunday afternoon and didn’t pause to eat (or make) dinner until I finished it at 9pm.

So many books, so little time… but all of these books are worth spending it on.