“Maybe I’ll catch the bus  after all,” my colleague Jo Case says. This after the local COVID scores come in, with zero for the day in South Australia. Jo had thought walking home would be safer. Who knows?

“For now,” our events manager Maddy Sexton says. I’ve just asked her whether next week’s event, a launching of Jon Jureidini and Leemon McHenry’s bombshell book The Illusion of Evidence-Based Medicine can go ahead. It depends on whether the human-density restrictions – oh, what new phrases trip off the tongue!  – get stricter in the next days. 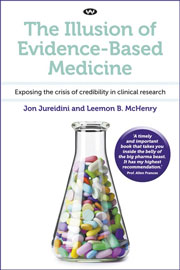 Meanwhile, Maddy’s solving the riddle of how, Covidly safe, we’ll serve the guests drinks and nibbles on the evening. If the evening’s on.

“If we have to cancel,” says editor Julia Beaven, aka Professor Jureidini’s wife, “we must send order forms to invitees. All our friends  and Jon’s colleagues want to buy the book, but they are holding out until the launching.”

Yes, yes, I mutter. I know about those order forms. Never bank on good intentions. There’s many a slip twixt cup and lip, as my Great-Aunt Molly used to say.

Julia has looked up from the manuscript on her screen, a forthcoming book by Andrew Hunter about Port Adelaide football club’s ventures in China. This year, of course, the Power had to give Shanghai the slip. 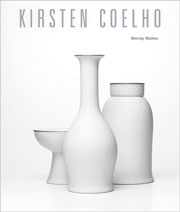 Julia’s enjoying her work on the book, even though she and Jon are Crows fanatics dedicated enough to freeze their arses amid the thinned-down crowds watching this year’s unfortunate games. We keep meaning to pursue InDaily’s Tom Richardson for a book from his wonderful Crows columns. Not this season, perhaps.

Back, though, to next week’s book event. Besides the legal uncertainties, beyond just “are we allowed”, moral and risk questions intrude, as they do for so many organisations. No one wants to spark a fire. But then, the virus isn’t spreading here. Is it?

Well it is, that invisible worm, wriggling  across the border, as we all know. A kind of survivor guilt, though too early and too hubristic to call it that, besets me also when I think of big-sister Melbourne, UNESCO City of Literature into which so much of our publishing is woven, at both supply and demand ends. No book launchings there for the nonce.

“We’re the leper city,” Melbourne print-broker Alfred Hornung says, sounding exhausted. I feel bad harassing him, but I have to know about delivery of the very beautiful new SALA Festival book, featuring the sublime works of ceramic artist Kirsten Coehlo and illuminating text by Wendy Walker. (You can see a display of Kirsten’s works now at the Art Gallery of South Australia.)

The book is on the water, Alfred reassures me, shipping already from Asia. So stock will be here soon. Barring, that is, shipping interruptions, port lockdowns, interstate freight closures.

Things aren’t so messy in Sydney for now, but life was nearly messed up for ex-Adelaidean author Adrian Mitchell, whose book about the shadowy life of iconic Australian poet Henry Kendall we have printing now. Back in March, Adrian and his wife were aboard the cruise ship Sun Princess, when suddenly “urgent and disconcerting messages began tumbling out of the PA system”. Only just, they beat the notorious Ruby Princess into Sydney Harbour, where “like those unfortunate passengers, we were kicked off without our breakfast and uninspected at first light”. 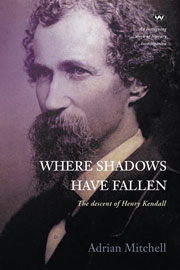 Adrian isn’t keen for a launch event. “We are bunkered down here in Sydney,” he says in his grim-joking way, “terrified that we will all be taken over by Victoria. They shouldn’t have said they could put on the AFL grand final here. See what hubris does?”

We’ve never been so busy in production, far as I can recall, with wonderful books ready and readying between now and Christmas. Quiet time has been good for creation, and so indeed has been JobKeeper. Now, peering through the fog, will there be customers once the government Band Aids are ripped off; will there be ways to get books in front of folks?

Do you remember the children’s book about the muddle-headed wombat? That’s how I feel quite often right now, and maybe so do you.

“Did you feed the cats?” Liz calls as I leave home for the minute’s walk to work, not needing, for now, any self-signed document declaring me “essential” (if only!).

“Dunno,” I call back. “Can’t remember.” Can barely remember my name.