In the foreword to Thrill Me, Washington writes that environmentally and politically, “it feels like we’re on the precipice of something [Stephen] King-like in the scope of its horror”.

That was before COVID-19, when no one envisioned an imminent global pandemic that would claim thousands of lives and confine people around the world to their homes.

“I was definitely thinking of the environment when I wrote that, but also political ideas,” Washington says now.

“They were the things I was really scared about before and then suddenly, within the blink of an eye, we had this other thing that was even more imminent to be scared by…

“I think there is something almost prescient about that idea that we’ve been on the precipice of something for a while now… that whole idea that something was coming; I definitely had that feeling.”

While Washington acknowledges that some people may not want to read stories that will make them more afraid than they already are right now, she says other readers see this type of book as the perfect escape. 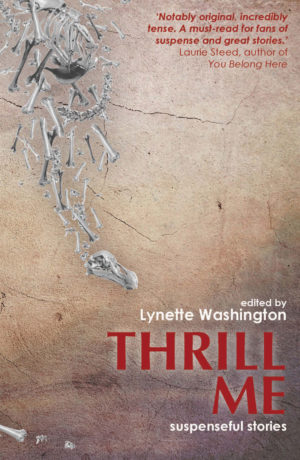 Her view is that stories like those in Thrill Me can reflect back the world we’re living in and help us understand and face our fears.

As a child, she was obsessed by the novels of horror writer Stephen King, happily forgoing sleep and socialising to devour nightmare-inducing titles such as The Stand, Pet Sematary, It and Misery.

“For me, picking up a Stephen King book, it was one of the first times that I remember choosing what I read … it wasn’t something that was given to me; it was something I sought out.”

The young Lynette was intrigued by the techniques the author employed to heighten suspense and impact, such as introducing “spooky fonts” and leaving swathes of white space on the page.

“I didn’t know you could do that, so it opened up a different way of seeing writing for me. There was also something tremendously exciting about being scared in the safety of my bedroom – and it opened up different worlds.”

It’s been a long time since Washington read a book by King. These days, her tastes lean more towards magical realism, with Israeli author Etgar Keret a current favourite. Her own short stories have been widely published – including a collection of loosely connected tales titled Plane Tree Drive – and she has also edited previous short story collections.

With Thrill Me, Washington asked her writers to reimagine the thriller.

She wanted stories that would make the reader’s heart race – “just like mine did when I first picked up The Stand” – but which also made them think and feel. She especially wanted to avoid stereotypical ideas that glamorised violence against women or presented them as powerless victims of terrible crimes.

“I felt that that was an idea that was really outdated and not appropriate any more… I didn’t want to present victimhood as a defining characteristic of women.

“The stories that came in are incredibly diverse but I think all of them have that moment where your heart skips a beat or you gasp for breath.”

Some of the tales in Thrill Me explore the fears and dangers of childhood – from train tracks to strange neighbours – while others are about the loss of love, ethical dilemmas and moral conundrums, the breakdown of society, and people forced to find their strength in adversity.

The book is the second published by Glimmer Press, which Washington launched last year after having previously worked as the editor at MidnightSun Publishing.

Social distancing rules meant the launch event for Thrill Me, originally planned to take place at the City of West Torrens’ Hamra Centre Library at the start of April, was replaced by a livestream launch on the Glimmer Press Facebook page which attracted a strong audience. Washington will also take part in a livestreamed conversation about the book on May 14 as part of the City of Marion’s Library Through the Lens project.

The early interest in the story collection seems to suggest readers do still have an appetite for suspense, despite current events.

“There are people who love short stories and feel that they fit perfectly into their life … it has that short bite capability that some people really love,” Washington says. “And I think that a collection like this, that by its very nature aims to draw the reader in and have that moment of really feeling something, is a big drawcard.”

Thrill Me, edited by Lynette Washington, is published by Glimmer Press and distributed by Wakefield Press. The following extract is from Rachael Mead’s short story, Lights and Sirens.

The yelp and wail of the siren packs the ambulance with sound. Joel swings out of the Savvas Yiros car park onto Unley Road. A horn blares. In her side mirror, Tash sees a prick in a BMW flash his lights but Joel doesn’t even dignify him with a glance. The traffic’s still pretty heavy for this late at night, but it’s the Friday of the Queen’s birthday weekend. Tash thinks Cameron should be almost at the campsite by now and the lure of a silent house, a stack of novels and the couch to herself is a siren call pitched for her ears alone.

Red light at Unley and Cross and the cars are three deep, both lanes. The traffic hears the siren and stops, waiting to see what they’ll do. Joel bumps over the median strip and Tash steadies herself, grabbing the Jesus bar and checking the traffic on the left.

Joel floors it through the intersection, swerving from the wrong side of the road back into the queue of tail-lights. There’s a Hyundai creeping along in the outside lane with a driver who must be deaf and blind not to clock them roaring up behind him. He sticks to the right. Joel flashes the high-beam. ‘Move it, dick for brains.’ Still no joy.

Tash leans over and flicks the siren mode so it gives a couple of sharp yips. It looks like the guy jumps so high he cracks his head. She can only hope.

It’s been years since driving priority one got Tash’s adrenaline pumping. The thrill eroded so gradually that she only really notices it’s gone when people ask about the job. Other than gunshot wounds, what it feels like to drive ‘lights and sirens’ is usually the first thing they want to know. She thinks everyone must get so worn down by the monotony of the peak hour commute that the idea of ignoring speed limits and red lights gets them as excited as Sandra Bullock in Speed. Hollywood has so much to answer for. She did four years of clinical study and then, just before graduation, two weeks of driver training. For her, that proportion really sums it all up. It’s always been about the work, not the flashy transport. But still, she thinks it’s weird how quickly she got used to it. Desensitised to the rush. After the first year, driving priority one didn’t even raise her heart rate. It just meant she had to put down her falafel.

The next couple of lights are green. The cars are spread out so Joel makes easy work of weaving around the ones that don’t or won’t get out of the way. Once the ambulance nears the railway line it gets trickier, the traffic sluggish as the road narrows. He leans on the horn and flashes the lights.

After the Springbank corner the road is quieter. It’s the foothills, so while there’s less traffic, there’s also less light. The road begins to snake up towards Belair and Joel has to slow for the tight bends.

Tash checks the GPS. ‘We should be coming up on it in about half a click,’ she says, reaching for a couple of pairs of gloves and safety glasses.

‘Here we go.’ Joel nods at the windscreen as he slows the ambulance, pulling to a stop so the headlights shine on the scene in front of them. There’s a car pulled over awkwardly on the left and a motorbike on its side on the downhill edge of the road, one wheel lodged under the Armco.

Two young men run towards them, arms semaphoring wildly. Not the best body language to see at a motorcycle accident. A figure is lying on the road, hard up against the curb. A third young guy is kneeling beside the prone figure and in the glare of the headlights the young guy’s eyes are wide and bright and he’s pumping awkwardly on the figure’s leather-clad chest in a jerky attempt at CPR. His rhythm’s bad, the compressions are way too shallow and he’s not stopping to breathe into the motorcyclist’s airway. A damaged motorcycle helmet lies on the road a couple of metres away, pale scrape marks on its black finish looking like badly drawn speed stripes.

Tash and Joel leap from the ambulance and grab their kits. The motorcyclist and the young guy are shaded from the streetlights by enormous pine trees so the scene is lit only by the ambulance’s headlights. The figures cast long, black shadows that stripe the road like staves on sheet music.

Joel heads for the two bystanders, deftly turning their backs to the scene while Tash makes a beeline for the motorcyclist and his inept resuscitator. She kneels beside the prone figure and immediately regrets it. Her knees have landed in a pool of vomit. The motorcyclist is unconscious but his mouth is open, gulping like a goldfish out of water. There’s blood from a deep graze across his cheek and brow and one of his shoulders looks low and distinctly dislocated. Tash knows she needs to check the rest of him since he’s probably sustained multiple limb fractures, but files that on a mental ‘to do’ list for once she’s got the guy stabilised. Right now, he’s got more serious issues.

This is an extract from Rachael Mead’s story Lights and Sirens, the full version of which can be read in Thrill Me. Mead also has a novel, The Application of Pressure, due out later this month.