You know the feeling. A book you’ve been wanting to read for ages, you’re halfway through, loving it, dreading the end (not the ending), when you’ll have to leave this better-than-reality world.

Like many readers, I have phases. I’m in the middle of a first-half-of-the-20th-century author phase, starting with Hans Fallada (starting with Nightmare in Berlin), then Alfred Dӧblin’s experimental Berlin Alexanderplatz, progressing through Robert Walser (especially his mysterious microgrammes), Joseph Roth and Stefan Zweig. A group of authors connected by a strange sort of misfortune – a lack of success, mental illness, grog, Hitler and Goebbels, a country in the process of renouncing a thousand (or more) years of culture in favour of autobahns and stadia (sound familiar?).

And then I heard about Haffner, and his fortunate, unfortunate, life.

The discovery of another gem, lost, rediscovered, sifted from the ashes of Bebelplatz (compare this with Barbara Cartland’s 723 literary turds and you’re left wondering if there’s any karma in the universe). Ernst Haffner’s 1932 Blutsbrüder, a novel about a group of outcast youth living in interwar Berlin, petty crime and prostitution, trying almost anything to get by.

The eight boys … spent the whole endless winter’s night on the street. As so many times before: homeless. Always trudging on, always on the go … Two have parents somewhere in Germany. The odd one perhaps still has a father or mother someplace … From the moment they undertook their first uncertain steps, they were on their own.

A short, taut, no-nonsense book set in the ale-smelling, drum-thumping shadows of the German capital, each of the boys free to roam, but isolated in their patch of city. Ludwig and Willi, trawling the length of Tauentzienstraβe, the bright lights leading towards Kurfürstendamm, as they feel…

… they are in a foreign city. What’s Berlin? As far as they were concerned Berlin was Münzstraβe and Schlesischer Bahnhof. It never occurred to them to go to the west of the city.

As with Hans Fallada’s Little Man, What Now? (published the same year), Berlin is the star of Blutsbrüder. There’s none of the rubble and grim desperation of Rossellini’s Germany, Year Zero (yet), but the decadence of well-to-do Berliners (Haffner called them ‘the amusement mob’) living in a city that had cleaved along the planes of braised ox cheek at the Hotel Adlon, and the seedy back alleys of Mitte.

It was a world that Haffner knew well in his day job as a social worker and journalist. But he wasn’t interested in Isherwood’s Sally Bowles, or Josephine Baker’s moves at the Theater des Westens. His was a glorious darkness, and the result – all short sentences and half-edited paragraphs, the mumblings of these dirty boys and their bad attitudes, the street-talk Haffner adopted as his own – is a sort of historical document more powerful than any newsreel or newspaper.

At noon, Willi and Ludwig are woken by the sound of a plangent voice at the door … Gradually it dawns on the boys where they are. In the white sheets of a private hotel. The distinguished gentlemen left after a while, and had each deposited a twenty mark note … What was left was two, scrawny little men whose wallets allowed them to buy young healthy, if half-starved boys. Details of the night just past swim into the boys’ consciousness. ‘Yuck!’ says Ludwig. ‘Yes, it makes me feel sick. Never again …’

Not a side of Berlin the Nazis, waiting in the wings when Haffner’s novel was first published by Bruno Cassirer, were sure to like. 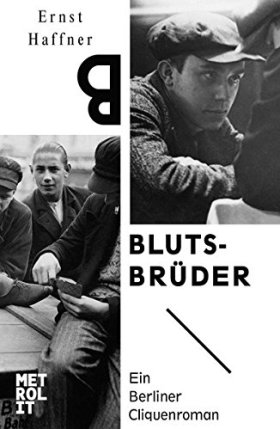 The republication of Blutsbrüder in 2013 prompted a new – but ultimately unsuccessful – bid to find out what happened to its author.

January 1933. Along come Hitler, Himmler and the rest of the crew. A few weeks later Bertolt Brecht leaves the country, not to return for another 16 years. In May, the SA starts burning books: a clear night outside the University of Berlin, songs and a torchlight parade, then Joseph Goebbels with a few well-chosen words:

“These flames not only illuminate the end of an old era, they also light up a new.”

Perhaps Haffner was there watching his soon-to-be-banned book burn, or Willi or Ludwig, looking on curiously as ordinary citizens helped storm troopers throw Thomas and Heinrich Mann, Remarque and even HG Wells onto the fire. Maybe the boys got an idea; maybe they joined up, died in France, or came home to continue their seedy lives.

Either way, the last thing we know about Ernst Haffner is that he and Cassirer were summoned sometime in the late ’30s to appear before the Reichsschrifttumskammer (RSK, a Nazi writers’ union) to explain themselves.

I doubt the meeting went well; and wonder what Haffner might’ve said to excuse his entartete kunst (degenerate art). “Well, I just wrote it as I saw it, gentlemen.” Followed by the usual Nazi lines about vӧlkisch art, self-sacrifice and positive images of the Fatherland. Haffner defending himself in the same way Trumbo, Shostakovich and a hundred others had to – unsuccessfully, it seems, as at this point Haffner disappears from the history of Germany, and literature itself.

Blutsbrüder is honest, unaffected, unconcerned about whom it offends or entertains. Like Pasolini’s 1955 novel The Street Kids, it accuses the adult world of neglecting, or abandoning, their kids, leaving them to get by in a world many would rather not read about (not unlike the tens of thousands of ‘wolf children’ left orphans in the rubble of 1945).

Blutsbrüder is an authentic book; its author more of a mystery than any of its characters, plot, themes. So why have so few people read it?

This is the third article in Adelaide author Stephen Orr’s series on books that have changed or challenged fiction. His previous articles explored Malcolm Lowry’s booze-soaked novel Under the Volcano and Flannery O’Connor’s “strange/beautiful” Wise Blood.