Incredible Floridas sees artist Roland Griffin and his family return home to Australia from London during World War II, with the vision of a simple life in the suburbs.

But while the isolated Roland is preoccupied with his painting, son Hal creates upheaval with his inability to control his own impulses, and is desperately in need of his father’s attention and approval.

The following extract describes an uncomfortable parent-teacher interview and its explosive aftermath.

Roland and Ena braced themselves as they walked into the foyer of Pennington Primary. Roland took a deep breath and said, ‘Still use the same stuff on the floors.’ There was an honour board, but their kids weren’t on it: 1947, 1946, 1945 – all Thomas. The wretched Welsh woman and her buffed-up kids: school captains, best and fairest of everything. Sheena Tom’s-arse, Sonia called the daughter.

They found the notice that told them Mr Saxby was upstairs in room seventeen. One step at a time, dreading what they were going to hear, ascending treads with bits of gum and old lunch ground in, posters warning them of the horrors of unwashed hands, the penalties for lateness and laziness and an explanation of what Katy did next.

The previous year, a just-out-of-college teacher telling them that Hal was too argumentative. Roland had said, ‘Really? He does what he’s told at home.’

‘Well, not in class.’ Roland’d just thought, You have to make him behave. They arrived at the top of the stairs and started along the hallway.

A swarm of cardboard bees threatened them with their pipe-cleaner stingers. ‘Which one’s Hal’s?’ Ena asked.

Roland remembered sticking it together, coating it with black oil, making egg-carton eyes. And Hal arriving home a week later: ‘She only gave me a C.’

Roland had been livid. ‘What, others did better?’

He couldn’t find the Griffin bee. ‘The bloody teacher never bothered hanging it up.’

‘Yeah, of course, everyone makes a bee. How about they teach them to write, or add up? That’d be useful.’

They arrived outside the room and sat down to wait on chairs that had been set out especially. Kids’ chairs. Roland’s knees were up past his ribs. He could feel the legs splaying under his weight. He wondered whether he should let them slide, break off. Yes, it would make a point, but he’d end up on the floor, and there were other parents, Mrs Tom’s-arse, coping quite nicely on her undersized chair.

He managed to hold on to the lockers and pull himself up. Ena soon did the same.

Roland moved closer to his wife and nodded to indicate a woman standing beside the door, waiting.

Ruth Philips approached them, almost kissed Ena, half-smiled at Roland. She told them about a stomach bug she’d had for three weeks; how she was worried it was something more ominous. Then she said, ‘You still painting, Roland?’

He nodded, wondered what sort of pictures Ruth Philips had hanging in her house: a faded seascape in the toilet? Vincent’s Irises above her bed of little joy or pleasure?

Ena could see it in Roland’s eyes. He’d say something he’d regret. Ruth would tell the other parents. They’d avoid them.

‘You do landscapes, don’t you?’ she asked.

‘But they’re modern, aren’t they?’

‘Contemporary. I wouldn’t do Renoir, cos I’m not him, or anyone else. I’m me.’

‘Still with the Highways Department?’

‘Yes. He’s writing tenders now, which is what he’s always wanted to do. He’s too old to be out digging up roads.’

Ruth was still looking at him. ‘If you want, he might be able to put in a word for you.’

Roland studied the network of capillaries across her nose. ‘I’ve got a job.’

Roland wandered off. There were collages, too: strips of gold and silver paper cut into irregular shapes and stuck together. He couldn’t see how this was art, or anything, really. He searched for his son’s name again, and this time he found it. The shapes hadn’t been cut, just torn; most of them were only half-stuck, and bits of white showed.

Ena managed to escape the woman and join him. ‘She’s just so ignorant.’

Roland preferred just to hate her.

An old man stuck his head out and called, ‘Griffin?’ Then went back in.

They went in and sat in front of Mr Saxby’s desk. There was nothing on it except an ashtray (full), a newspaper, a bulging wallet and a Best Bets. He said, ‘Hal said something about racing?’

‘Sometimes,’ Roland explained. ‘But it’s mainly track work. Our neighbour used to be a strapper, and now he’s a clocker.’

Saxby lit up. ‘Well, horses, that might be just the thing for young Hal.’

‘He can’t sit still. Whatever we start, he gets up, wanders.’

Roland wondered whether Mr Saxby mightn’t have started on something more positive. ‘He does what he’s told?’ 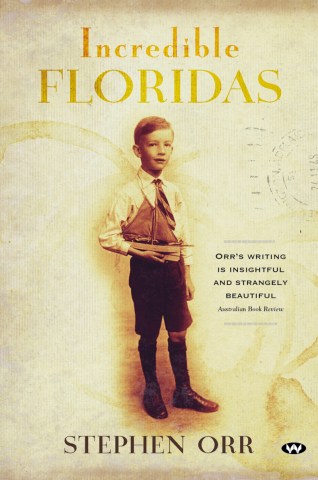 Saxby indicated a chair in the corner, facing a wall. Someone had written ‘Hals chair’ on it. ‘That’s where he generally ends up.’

‘But maybe he’ll make a good jockey.’ ‘How long’s he spend sitting there?’

‘He’s gotta learn.’ And then, ‘I’ve got an interest in racing. Part-own two mares. Kitchen Hand, you heard of her?’

Roland searched for signs of education. There were papers on the ledge behind Saxby; a textbook, a box of readers. The blackboard was clean, and looked like it had been for some time. ‘I think ten minutes, perhaps, and he’ll get the idea. I don’t want him missing out on … whatever it is you do?’

‘I like to get my message across,’ Saxby said.

Ena noticed a cane in the corner. ‘We were wondering about his maths, and spelling?’

Saxby opened a desk drawer, produced a roll book and used a yellow-tipped finger to look. ‘Tests,’ he said. ‘Speed and accuracy … all out of ten.’ He seemed surprised. ‘Ten, each time.’

Ena noticed that most of Mr Saxby’s hair had gone, and what remained had been oiled and cut in the shape of a soup bowl.

‘I’ve been doing this forty years,’ Saxby continued. ‘There are very particular types of children. Some are like blocks, and they just drop into their holes, and some need a bit of sanding down, but Hal … kids like Hal are in their own world.’

He leaned forward. ‘Let me give you an example. Last week, a girl comes running in here and says, “Sir, Hal’s in the girls’ toilet.”’

Roland turned to his wife.

‘“Sir, he pulled down his pants and took out his thing.” So I went out, and Hal’s standing in the hallway, and I say, “Well?” And he says, “I was just getting a drink.”’

Ena was confused. ‘But we didn’t hear anything about this.’

‘Because I wasn’t sure.’

‘So, the girl might’ve been making it up?’

‘Perhaps, but she’s reliable. Anyway, he ended up arguing with me, I told him to go to the office, he ran off, we spent an hour searching for him and the groundsman found him in the shed.’

‘If he’s a square he needs to go in the square hole,’ Saxby said. ‘Otherwise, by the time he’s fifteen or sixteen …’

No one spoke for a bit. They could hear Mrs Philips and Mrs Thomas talking about their pop-in-the-hole children.

They walked home at dusk. Roland said, ‘If he can survive that old bastard …’

‘Maybe he likes staring at the wall?’

They turned the corner and Hal was waiting, sitting on a fence, his hands in his pocket. ‘What did he say?’ he asked.

They continued walking and he followed them. Roland said, ‘Maths, excellent, English, excellent. Saw some of your artwork.’

‘Why? You expecting something?’

‘We saw your chair.’

‘Anyone who gets up, he shouts at them and they gotta sit there.’ He came up beside them.

Roland tripped, but kept on. He picked a sprig of jasmine from a fence. ‘He told us what happened in the girls’ toilet.’

Hal stopped in front of them. ‘What?’

‘I went in there cos it was quicker. The boys’ toilet is at the other end of the hall. Didn’t think no one was around. But she came in.’

‘Gillian. And she screams and runs off and tells Saxby.’

‘Mr Saxby reckons you pulled down your pants.’

‘Showed her your thing.’

‘Why would Mr Saxby have said it?’

‘Because she made it up. She hates me. She always has.’

Hal tried to think. ‘She just does.’ He tensed, clutched his fists, waiting.

‘I never showed no one nothin’. But he believed her cos she’s a girl. He likes girls. He makes them stand with him and he …’ He turned and ran off.

‘Hal!’ Roland called. They couldn’t chase him two more blocks. When they came up the drive, Hal was standing with one of Roland’s recent paintings, his farm children. He waited until his father was closer then lifted it and started smashing it on the concrete. Roland made no attempt to stop him. Ena did, but he pushed her away, and she stood back, waiting for her husband. Hal kept going until the frame shattered and the canvas collapsed. Then he laid it on the ground and stepped on it.

He raised a shaking hand to Roland. ‘I never did it.’

Roland didn’t care about the painting. He just wanted to know what to believe.

This is an edited extract from Incredible Floridas, by Stephen Orr, published by Wakefield Press and available from next month. Orr, who works part time as a teacher in Adelaide, is the author of six previous novels – including Time’s Long Ruin and The Hands, both of which were longlisted for the Miles Franklin Literary Award. His most recent published work was a collection of short stories, Datsunland.