Val McDermid’s version of Northanger Abbey is the second book in The Austen Project, a HarperCollins initiative which has charged six modern authors with presenting their own unique take on Austen’s six complete works. The project began last year with Joanna Trollope’s version of Sense & Sensibility, with Pride & Prejudice, Emma, Persuasion and Mansfield Park still to come. 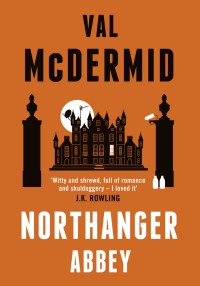 It’s a bold and ingenious idea, and prolific crime writer McDermid – author of the best-selling series that inspired TV’s Wire in the Blood – was an excellent choice to tackle Northanger, which centres on a teenage girl (Catherine) whose love of gothic novels sparks all kind of wild imaginings when she is invited by new friends to stay at their mysterious abbey.

The original characters and plotline are retained in this modern tale, although the setting is moved from Bath to Edinburgh, smack-bang in the middle of the annual Edinburgh Festival. This is where Catherine, the rather naïve daughter of a pastor, meets new BFF Bella Thorpe, and, later, Ellie Tilney and her handsome lawyer brother Henry.

Does she also meet a vampire? That, dear reader, is something you must discover for yourself in this twisty tale of romance and mystery.

Northanger Abbey is a departure from McDermid’s usual style; in fact, it reads rather more like a young adult novel. There are also elements of the 200-year-old tale that aren’t especially credible in the modern setting – it’s unlikely, for example, that a 17-year-old today would be as innocent, superstitious and acquiescent as our young heroine Catherine. However, this only adds to the whimsical nature of the book, which is an entertaining and effortless read.

“No bonnets – all brio,” wrote author Jeanette Winterson in a recommendation. Totes.