When she was in high school, Dearna Newchurch did not believe science could possibly be part of her future.

“It just seemed like it wasn’t for me,” says the Kaurna and Narungga events producer.

“I think the way that science is considered at the moment is very much through one lens, and it doesn’t incorporate other ways of knowing.”

Instead, she dived into an industry where she had witnessed the opposite attitude.

While travelling in Europe, Newchurch attended arts events that deliberately created space for a multitude of perspectives and voices. She returned home to Adelaide primed to study and work in the arts.

Her career has been an unqualified success. For more than a decade, Newchurch has steadily climbed the ladder at some of SA’s most respected arts organisations – producing large-scale, innovative events and including marginalised voices with each project. 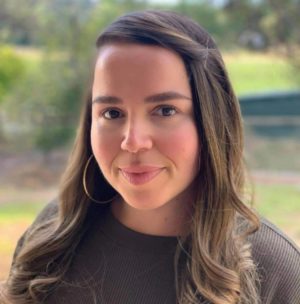 But her work has also opened unexpected doors – leading her to question why she felt unwelcome in fields like science and technology from such a young age.

While at the Adelaide Fringe, she worked on projects that used digital mediums and newer technologies – like projections that enveloped buildings – to engage audiences with different artistic voices.

“Through that, I learned that technology could be used to extend a story,” she says, “including cultural stories and ways of knowing, which could challenge people’s preconceptions in this space.

“It was a turning point for me.”

Newchurch followed seven years working at Fringe with a project co-ordinator role at UniSA’s Museum of Discovery (MOD), where art, technology and science are pro-actively blended together.

“I was able to actively deconstruct and decolonise what I think artists and scientists are,” she says.

“Now, I’m embracing all of those perspectives and understanding how they can inform each other, and how reciprocal their nature can be.”

The realisation has given new shape to her career. Newchurch’s priority now is to ensure others, particularly those from marginalised communities, are offered the opportunity to use science and technology as part of their artistic toolkit.

It’s an urgent mission. In a sector like the arts, where originality of expression is prized, those with access to new modes of communication have a distinct advantage.

“This is where the conversation is going moving forward,” she says.

“I really want to be able to change things up in those sorts of spaces, which are only really usually made for certain people… everyone should be able to be part of that conversation.”

Currently working as the First Nations Program Producer at ANAT (Australian Network for Art and Technology) and with multidisciplinary experience design studio Sandpit, Newchurch is perfectly positioned to drive this change.

Leading a transformation that involves challenging the systemic organisation of knowledge will never be easy. Newchurch credits early experiences working on projects like Desert Fringe with helping her prepare to advocate strongly but effectively for new approaches.

“I was working under mentors and learning to engage with the spectrum of stakeholders,” she says. “We were working with community, then there’s also sponsors and sometimes government.

“It’s a tricky balance, but I saw how a collaborative approach made it possible.”

This is the mindset she takes with her as she works to carefully and effectively to erase the definitions that have kept art, science and technology apart, and to deconstruct the barriers that maintain exclusivity in the sectors.

She is quick to acknowledge those who have helped her come this far. But the determination and courage needed to be part of such a seismic shift can only have originated with Newchurch herself.

This is part of an InReview series – The Business of Art – which focuses on the development of performing arts careers and opportunities from Adelaide. The series has been produced with the support of the Adelaide Fringe.