The relatively intimate Ukiyo Tent in Gluttony is jam-packed for the opening night of Melbourne-based AfterDark Theatre’s Barbaroi. Sitting up the back looking down at the small performance area with a piece of scaffolding at the rear and half a dozen surly-looking acrobats sizing each other up, there’s the sense we’re like a crowd of eager onlookers about to witness some kind of street scuffle.

And then, without any fanfare, it begins – first with a frenetic and edgy dance-meets-acrobatics floor routine involving all six performers, followed by a snappy change of pace with a beautiful solo rope display.

Slickly choreographed routines backed by a thumping soundtrack see bodies fly through the air, tumble across the ground, climb up and leap off each other – all without any kind of safety net or harness. There are gravity-defying acts involving pyramids, poles, hoops, ropes, sheets of upright perspex, and juggling. 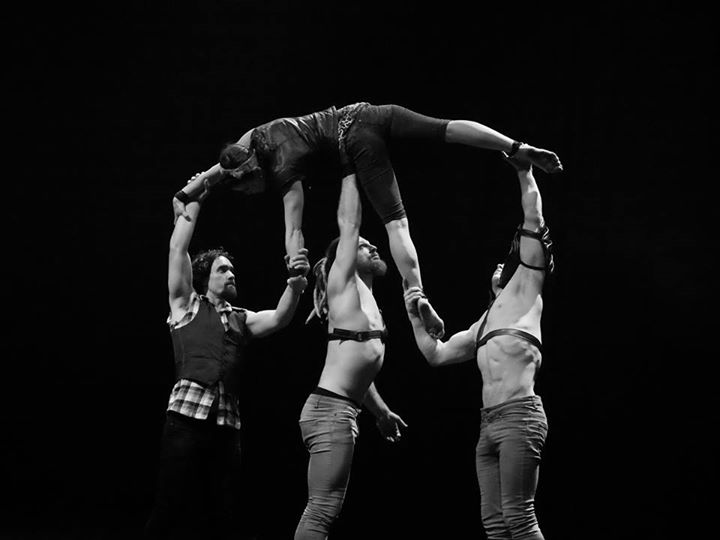 Barbaroi is a show without a narrative, ringmaster, or fancy costumes and props. Instead, the focus is firmly on the four male and two female performers, who spin a story through their skills and the sassy street-wise characters they inhabit.

Being so close to the action adds to the thrill for the audience, who clap, cheer and even squeal at the most breath-taking moments. It’s not entirely flawless, but on the rare occasion an acrobat does miss their mark on the first try, everyone is on board, encouraging them to greater heights.

It’s only at the end of the performance that the troupe finally break out of character, clearly thrilled by the enthusiastic reaction of their animated audience, at least half of whom were on their feet for the final bow. This is that kind of Fringe show: raw, exhilarating and loads of fun.

Barbaroi is at Ukiyo in Gluttony until March 15.