Angel was a hit at the Edinburgh Fringe, earning multiple awards and four and five-star reviews, and was named by The Times in London as one of Britain’s 10 best plays of 2016.

For the Adelaide season, actress Avital Lvova will play Rehana, “The Angel of Kobane”, a law student who joined the resistance when the Syrian town of Kobane was besieged by ISIS. She is claimed to have shot and killed up to 100 extremists.

Here, Naylor – who presented Echoes at Holden Street during the 2016 Fringe – explains more about the story behind Angel, and how the character at its centre is a symbol of a larger struggle.

Most Australians will know little about the Siege of Kobane – what can you tell us about how it unfolded and its significance?

It’s not just Australians, believe me. Part of the reason so little is known about it is that Western journalists barely covered the story. It was far too dangerous to report from Northern Syria at the time. ISIS was in full flow – and notorious for its brutal treatment of Western journalists – so it rarely featured in the papers.

For those who don’t know, Kobane is a border town, in the Kurdish region of Northern Syria. And for six months it was THE frontline in the battle against ISIS.

The siege was extraordinary. Brutal. So much so that informed commentators have compared it to Stalingrad in its ferocity. Check out the damage with your search engine – it’s unbelievable.

It happened in mid-2014. ISIS appeared invincible at the time. They had just steam-rollered through Iraq, and had been so intimidating that whole divisions of the Iraqi Army ran away, rather than face them. The Iraqis left their equipment behind – which ISIS obviously took for their own purposes. It’s estimated that, when they took Mosul, ISIS picked up 4000 machine guns, 1500 humvees and 50 howitzers. They took this weaponry to Kobane.

By and large, at the beginning, the locals of Kobane only really had ageing Russian rifles to protect themselves with.

So by the time the Jihadis turned their weaponry on Kobane, it was assumed the locals would fold, too. Washington basically wrote the city off as doomed.

But the Kurds drove ISIS back.

So it’s very much seen as a turning point in the hostilities. A moment when the forces of democracy and freedom finally stood up to fundamentalism and won. The Kurds obviously take great national pride from the event – and because so many women were involved in the fighting and defence of the town, it has strong feminist undertones.

How did the “Angel” of your play’s title transform from being a pacifist law student to a sniper during the siege?

To be honest, if I answered that question in depth, it’d be a real plot-spoiler! Suffice to say that the events she experiences make it impossible for her to continue her studies. She undergoes many horrors, and is pushed to extremes, which fundamentally change her personality.

There seems to be a lot of legend surrounding her story – to what extent is the production is based on fact and how much is creative licence?

Frankly, not much is known about her. Yes, there was a person called Rehana. She was a law student who jettisoned her studies to fight for the Kobane resistance. But that’s about all the facts we know.

Beyond that, accounts differ. Some people say she was a prolific sniper who shot 100 Jihadis. Others say that number is vastly exaggerated. She’s become an internet myth… people don’t even know whether she’s alive or dead. 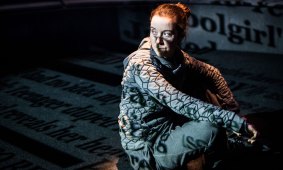 Jihadis have posted pictures online of a grinning soldier holding up the severed head of a woman who they claim is Rehana. The Kurds have responded, by posting a picture of Rehana looking alive and well – and flipping a V sign at the camera. One of the accounts is definitely wrong!

But there are many truths in my story.

I’ve distilled the accounts of many different women in the region. The events of the story didn’t necessarily all happen to Rehana – but they each happened to someone.

For me, the story isn’t about Rehana alone, but about women in the region. I’ve just made my character a symbol of a larger struggle.

In what ways might the play challenge some of the stereotypes Western audiences hold about Middle Eastern women?

I’m hoping it’ll challenge those stereotypes massively. I think there’s a tendency in the western press to portray Middle Eastern women as passive victims. Obviously this is nonsense – on both sides of the struggle.

Whether you agree with them or not, many Jihadi brides see themselves as making a proactive, feminist choice. And on the other hand you have the Kurdish female fighters – known as the YPJ – who were fearsome, fearless defenders of Kobane.

Nearly a third of the fighters defending the city were women. This is a higher proportion of female fighters on the frontline than any Western army.

Edinburgh Fringe audiences and critics described Angel as powerful and haunting. Your 2016 Adelaide Fringe show Echoes garnered similar responses. What is the key to injecting such intensity and emotion in a production with just one or two actors and a simple set?

It’s taken me 20 years of experience to work that out! Essentially, you’ve got to make the audience care about the character; make her seem, real and true.

I help my audiences empathise with Rehana, by giving her similar interests to the audience themselves. She is a girl who likes Western culture, Beyonce, LA Law and Star Trek. Her loving relationship with her overbearing father is one that everyone will recognise.

Angel by Henry Naylor will be performed at The Studio at Holden Street Theatres from February 14 to March 19 as part of the Adelaide Fringe.