Born 175 years apart, the girls are both intelligent teenagers who have grown up in the English town of Ipswich, which they find dull and suffocating.

Both travel overseas in search of husbands, adventure and a desire to share their religious beliefs.

And both ultimately have their idealism shattered by the brutality of men, colonial cruelty and uncompromising ideology.

Naylor is best-known for his comedy work, and despite the serious themes of this work, there is also humour – especially in the early part of the script.

Samira starts out as an ordinary British teen, working at a bookshop, but the racism and anti-Muslim rhetoric she witnesses makes her susceptible to her best friend’s suggestion that she join her in flying to Syria to marry a an Islamic State fighter.

Meanwhile, the spirited Tillie – whose penchant for the study of insects, including maggots, is not quite befitting of a Victorian lady – sets sail for India, intent on marrying one of the British expats setting up the Empire. She ultimately ends up in Afghanistan with her new husband, a lieutenant. 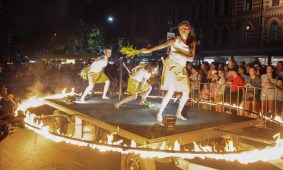 The jump from Ipswich to the East is abrupt, as is the girls’ awakening. As the barbarities of their new lives are revealed – through taut narrative and convincing performances – the play becomes much more intense. It packs a powerful punch which is amplified by the intimate and appropriate setting of Holden Street Theatres venue The Arch (an old church).

Echoes highlights how much we haven’t learnt from history, as well as helping audiences understand what might motivate a woman like Samira to take such a dramatic turn in her life. It’s hard-hitting, highly topical and a must-see for those who enjoy serious and intelligent theatre.

Echoes is at Holden Street Theatres until March 13 as part of the Adelaide Fringe.