This is the third year I’ve been honoured with an invite to perform at Holden Street Theatres as part of Adelaide Fringe Festival. Either they’re genuinely glad to have me back, or the extreme changes in my facial hair have confused the venue into thinking I’m actually three different people.

Beards go in and out of fashion, and the University of New South Wales thinks it knows why.

Its researchers published a study in 2014 showing that the perceived attractiveness of beards follows what is known as “negative frequency-dependent selection”, an extension of Darwinian theory basically saying that the fewer beards there are in a population, the more attractive beards will seem, thus encouraging more beard growth, thus reducing the attractiveness of beards, thus encouraging more shaving, and so on back and forth.

In an attempt to stay as attractive as possible (in the attractive-to-theatre-festival-bookers sense; I am a happily married man), I am currently varying my facial hairiness with alarming regularity.

One day my face will flow with a fulsome Charles Darwin beard, in a musical comedy I brought to Adelaide in 2012. The following day, as the Adelaide audience discovered in 2014, my top lip will sport the elegant sproutings of an Einstein tash, as I wrange with (and rap about) relativity.

Then suddenly, as I’ll be demonstrating when I return this year, I’ll have a face so cleanly shaven you may just conceivably mistake me for Marie Curie.

When we were looking to complete what we now affectionately call our Scientrilogy, Curie was the obvious choice for several reasons. She neatly fills the “chemistry” gap left vacant by Darwin and Einstein’s focus on biology and physics, respectively.

She, like they, had a fascinating life filled with conflict and intrigue, and is therefore well-suited for exploration through theatre.

And she, like they, embodies an entire scientific discipline: think of evolution, and you think of Darwin; Einstein is Mr Relativity; and Curie is the mother of radioactivity.

At the same time, there are a few reasons why she might not be an obvious choice. For one thing, she and I are different genders, a hurdle that simply shaving off my beard isn’t going to overcome in a single stroke (if you’re interested to see how we pull the transformation off, you’ll have to pop along to the show). 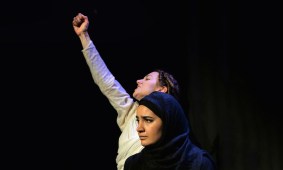 Fringe brain food: shows to get you thinking

Conversely, her gender is the very reason that she is absolutely the right choice – it is vital, as science communicators, that we recognise the important role women have played in the history of science, so that we can inspire the future generation of scientists both male and female.

Theatre about science is a boom industry at present, and for very good reasons – theatre allows for lateral leaps and metaphorical insights that bring otherwise dry scientific topics to life. Here’s hoping negative frequency-dependent selection doesn’t apply to the marriage of theatre and science, for I feel we’re merely beginning to explore the possibilities.

John Hinton will present The Element in the Room: A Radioactive Musical Comedy About the Death and Life of Marie Curie at Holden Street Theatres from February 11 until March 12 as part of the Adelaide Fringe.