The story of Acis and Galatea isn’t much, and all one needs to know is that it consists of bucolic scenes of shepherds and shepherdesses arguing with each other – that sort of thing.

But the music, well, it is gorgeous and pure Handel. Full of ebullience, pathos and, above all, generosity, it radiates with the sort of high-raised melody that singers love to sing, and that instrumentalists try their hardest to emulate.

So tiny was the group of musicians assembled for this performance of Acis and Galatea in the Adelaide Festival’s Resonance: Chamber Landscapes series, that to start with one felt a twang of disappointment. Just five singers and six instrumentalists gathered in UKARIA Cultural Centre’s lovely little auditorium, leaving room for a grand piano to sit idly to one side.

Nevertheless, here was Sydney’s much-vaunted Baroque opera company, Pinchgut Opera along with its grandly named Orchestra of the Antipodes, bringing their wares to Adelaide for the first time (at least as far as this writer is aware), and giving us festival-goers a taste of what Sydney and Melbourne audiences have been enjoying for two decades.

Any initial misgivings about how diminutive this production was turning out to be were soon quashed by the wonderful polish of this performance.

Directed from the harpsichord by Erin Helyard, it was spirited and agile in a way that tends to make larger productions of Handel sound bloated. The opening sinfonia immediately set a smile on one’s face, and a succession of choruses and arias that followed were radiant and inspiringly noble. 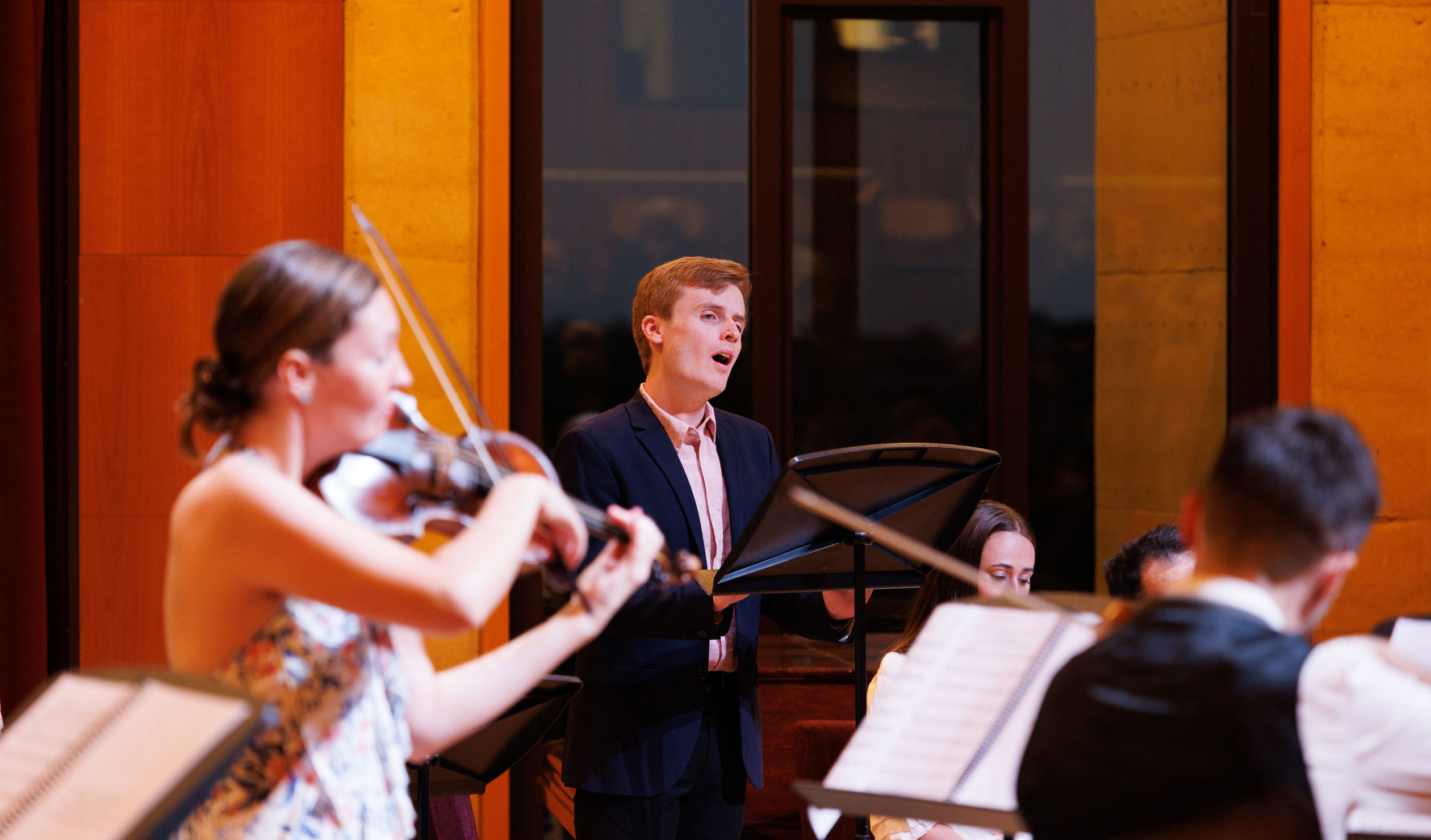 The quality of singing was simply outstanding. These were clearly Handel specialists, able to capture to perfection the composer’s grand oratorical tone and simple, pure emotion.

As Galatea, Chloe Lankshear was a warmly expressive, natural-sounding soprano who needed nothing more than a white-feathered fan to aid the seductive power of her arias. To her side, tenor Louis Hurley made a proud, aloof Acis, who resists her charms. Rounding out the cast were another very fine tenor, Richard Butler, and a terrific bass, Andrew O’Connor, who stole the show in “O Ruddier than the Cherry”, Acis and Galatea’s most famous aria.

The accuracy of these singers in their solos was one thing, but the blendedness of their tone was another. Their immaculate choruses were a highlight, from the joyful opening “Oh the pleasures of the plains!” to “Mourn, all ye muses!” after Acis is murdered. Joining them in these was the fifth singer, mezzo Anna Fraser, who had to patiently sit through all the others’ solos. It was a pity to not hear more from her, but that’s simply because Handel only gives the mezzo a role in the choruses.

As harpsichordist and conductor, Helyard is a most fastidious musician who has an exceptionally clear idea of Handel’s language. At various times he would stand up to direct his forces while still playing his left hand on the keyboard, and with graceful movements of arm bring smooth, fluid shapes to melodic phrase.

His tiny orchestra, which included Adelaide violinist Simone Slattery, was beautifully articulate and expressive. The plangent tones of Adam Masters’ oboe in the work’s more melancholic moments, and expert basso continuo playing from cellist Anton Baba, were a highlight.

Two things could have been better. Helyard’s harpsichord playing was barely audible, and that’s a pity because he is such a marvellous musician. Only when he and Baba were alone in the recitatives could one really hear and appreciate his playing on the small, lightly built Italian-style harpsichord they had brought. Perhaps here was a case for using the subtlest amplification, anathema though that idea probably sounds.

Also, given how reliant the story is on a series of relatively static scenes, more attention could have been given to conveying emotion by facial expression and gesture. It’s all part of Baroque oratory. O’Connor conveyed the multiple sides of Polyphemus, from joviality to venomous anger, and Lankshear was just as visually engaging as Galatea (at one point hiding her kiss to Acis behind a fan), but the tenors could have done rather more in this department. Just a thought, but O’Connor might be their ideal coach next time.

In the end, this visual aspect did not impact on the overall satisfaction of the performance. Helyard’s conception of Acis and Galatea was so musically complete that one felt they had all done the work wonderful justice.

To have it take place UKARIA, with its idyllic views out to Mount Barker Summit, was an exquisite joy.

Handel’s Acis and Galatea was presented on March 10 and 12 at UKARIA Cultural Centre as part of the Resonance: Chamber Landscapes series.