In a semi-dark room, inside a building that feels forgotten by the city around it, lines of neat little tables recede into the dimness. Each holds a singular anachronistic, rotary-dial phone. Rising from the receivers, bleeding into each other, is a cascade of whispers.

The voices are those of everyday Australians who have left voice messages for The Nightline in the bruised-blue hours between midnight and 6am. The room is the setting where The Nightline creators Roslyn Oades and Bob Scott invite audiences to listen in.

Oades is well-known for her ability to harness the artistic power of conversation.

Much of her work falls into a pioneering genre called “headphone verbatim”, in which actors re-create testimony gathered during interviews. By casting actors who appear mismatched with the interview subject, but retain vocal characteristics like intonation, Oades found a way to question how we listen and who we listen to. With this tool, she has adroitly interrogated subjects as broad-ranging as ageism (Hello, Goodbye & Happy Birthday), the Cronulla riots (Stories of Love & Hate), and masculinity (I’m Your Man).

“I think we’ve got a real restlessness as a culture [in Australia],” says Oades. “There’s a lot of unresolved things, so I guess it’s a way of trying to grapple with that, to a degree, and to provide opportunities for audiences to listen closely and listen differently to their own community.”

The Nightline, which comes to Adelaide Festival this March, feels like a departure from this tradition of making, but is more of an evolution.

“It’s retaining the essence of my practice… I’m still doing that thing of recomposing from reality,” says Oades. “In the case of The Nightline, I’ve put out an invitation to strangers to leave me voice messages, and those voice messages are the palette I’m working from.

“In previous works, I’m asking the questions, I’m driving these things in a particular way. I had a strong desire to instead invite people to make offerings to me, so it was a very voluntary process.”

Superficially, The Nightline fits snugly alongside previous Adelaide Festival shows that use verbatim source material, such as 21: Memories of Growing Up. It is even more readily compared to American artist Allan Bridge’s 1980s sensation the Apology Line (made freshly famous by the podcast of the same name).

Those comparisons, though, stop shy of recognising the importance of curation in Oades’ art. The sticky centre of The Nightline is not its voyeurism or humanistic relatability, but its composition, which manages to transform thousands of random voicemails into subtle revelations about commonalities and divisions.

“The work is about connection and disconnection, in a way, so I’m finding these little moments that unify the material,” says Oades.

“I feel like the work is really full – I’ve got this really broad cross-section of people from different class backgrounds, different night shift occupations, a lot of insomniacs who have similar patterns of thinking going around in their heads.

“And I still get the surprising and quite delightful ones, like… there was a teenage girl recording her dad snoring, which was actually really cute and lovely.” 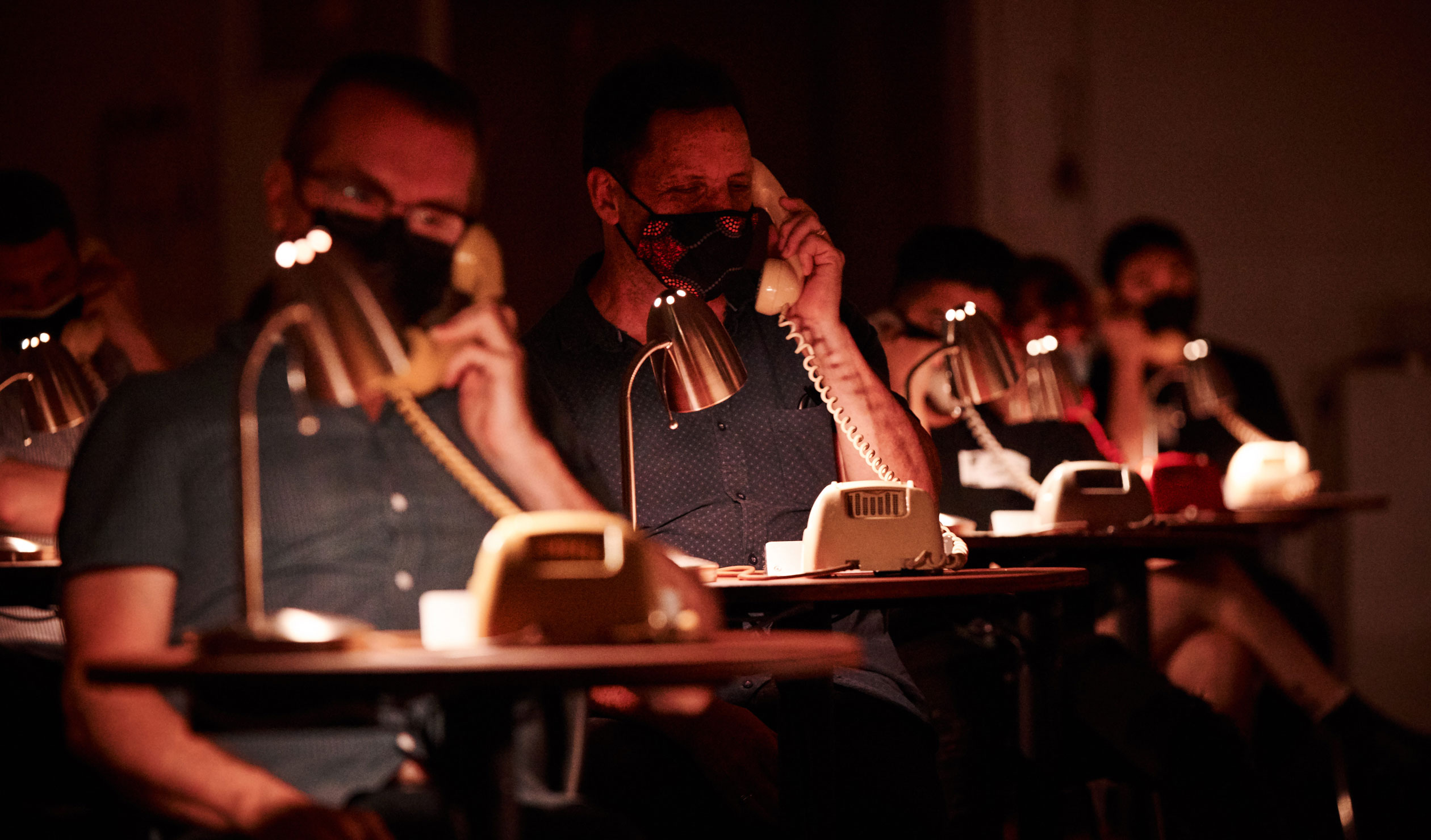 The Nightline is about connection and disconnection. Photo: Joshua Morris

Given The Nightline promises every visitor a different experience – with the 40 minutes of audio each attendee hears through their phone handset controlled by the presence of a switchboard that allows for a choose-your-own-adventure journey – re-assembling these calls into something structured feels like a gargantuan task.

Oades credits her collaborators with keeping her honest, encouraging her to ditch unnecessary inclusions, even when she has grown attached to them.

The Adelaide season sparked a fresh round of edits. It follows on from previous presentations of The Nightline in Sydney and Melbourne, where the shows were city-specific, including only local callers. In Adelaide, the team is creating the first national version – a portrait, Oades says, of “Australians at night”, from “wheat farmers in WA” to city-dwellers awake with their newborns.

The Nightline crew, which includes co-creator and sound artist Bob Scott and site designer Clare Britton, have also been responsible for translating the intimate aesthetic of solitary night-time calls into a physical experience for audiences.

“I feel like the work is also about the lost and the forgotten, and so there’s something about using repurposed technology that felt really right. Everything in the setting is just the debris of things that people didn’t want anymore,” says Oades.

“It’s all using real documentary items as well, so that idea of recomposing from reality extends throughout the design of the work.”

In this carefully calibrated experience, Oades and her collaborators are offering an invitation – to step into a stylised world, pick up a phone from the past, sink into the voices of the night, and to see more clearly the undercurrents that pulse through our country every day.

The Nightline remains open to callers who are awake between midnight and 6am. Visit the website for details on how to contribute. It is showing as part of the Adelaide Festival, at the corner of Waymouth Street and Young Street, from March 4-20.