The original billing for this Adelaide Festival event was for Botis Seva’s revolutionary BLKDOG alone. The performance by five dancers from his company, Far From The Norm, would have been electrifying enough, even for a performance that came in at well under an hour. But the late addition of Six Years Later, a short duet choreographed by Roy Assaf and performed by Natalia Osipova and Jason Kittelberger, lent weight to the sense that nothing – not even the hallowed traditions of classical dance – can remain as they were after the events of 2020 ripped at the fabric of normality.

In this sense, the strangeness of a live-streamed evening performance from a locked-down, Saturday-morning-London felt more integral to the mood of the two pieces than a mere necessity.

Six Years Later was created in 2012 by Israeli choreographer Assaf and selected by Royal Ballet principal Osipova for her Pure Dance program at Sadler’s Wells in 2018. A superstar of the ballet world, Osipova inhabits every role with virtuosic grace and intensity, endowing her performances with emotional depth. Rising rapidly through the ranks of the Bolshoi Ballet in her native town of Moscow, she went on to become principal dancer at London’s Royal Ballet, her quest for new forms of physical expression breathing fresh life into the form as she pushed at the boundaries of the classical language of ballet.

She performs Six Years Later with American dancer and choreographer Jason Kittelberger, their on-stage chemistry enhanced by the fact that they are a real couple. Their half-lit figures emerge from the dark screen in Her Majesty’s Theatre, glowing in the slow-pooling light. Their simple clothing in neutral, earthy colours sidestep the artifice of “costume”, the pared-down honesty mirrored by a stage adorned only by Omer Sheizaf’s simple and effective lighting design.

Gestures made by one invite an emotional response before assumptions crumble a second later when they are repeated by the other. Fluid intertwining of arms turns them into one creature until they break apart, pushing aggressively against other’s chests with hands or shoulders, or placing a palm on their partner’s face to push down or lift up.

Changes in mood are marked by abrupt cuts in the music, Beethoven’s “Moonlight Sonata” is interrupted by Marmalade’s “Reflections of My Life”, while the two saunter around the stage, chatting as if they’re taking a break from the performance. For 24 minutes, the two perform a perfect physical dialogue of vulnerable honesty and great beauty. In turns playful, seductive, frustrated, angry and melancholic, Six Years Later reflects the complex dynamics of two people who share a history. 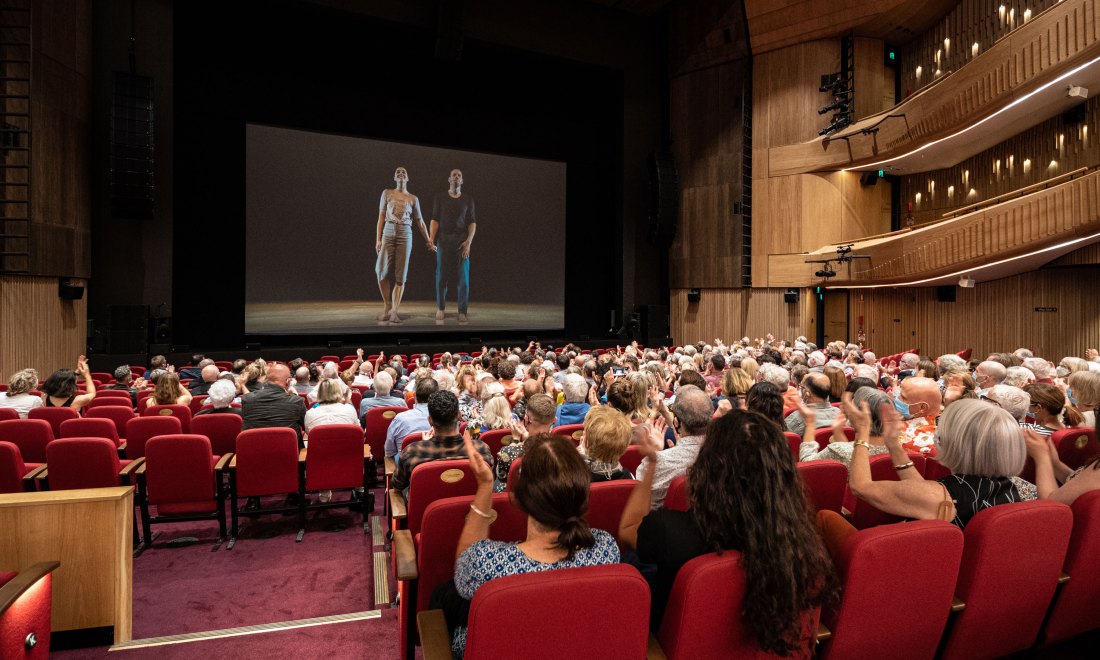 BLKDOG was commissioned in 2018 by Sadler’s Wells to celebrate 20 years in its current north London location. The world sat up and took notice in 2019 when it earned choreographer Seva the Laurence Olivier Award for Best New Dance Production. Born in south London and raised in the rough east London borough of Dagenham, Seva began his dance career with hip-hop dance company Avant Garde. Going on to form his own company Far From The Norm at 18, he set the dance establishment aflame with a new vocabulary drawn from a background steeped in hip-hop-inspired street dance.

Five dancers in grey, like escapees from a post-apocalyptic prison, sit slumped under a low grid of washed-out spotlights, heads covered with hoods that hide all markers of individuality. The camera zooms in on the face of one dancer who observes us in a sideways dispassionate stare. Disconnected from one another, bodies repeatedly attempt to lift themselves off the floor, only to sink back down, heavy with depressive paralysis.

The layered soundscape begins with a question that rises above the sounds of running and adrenaline-inducing panting: “So tell me, how are you feeling?” A child’s voice asks: “Will you read me a story, Daddy?”

A mesmerising flow of concentrated physicality follows, the strength and skill of the dancers keeping them moving in perfect unison. The reality of life for a young black man growing up in east London is reflected by looping sounds of guns being cocked while dancers blankly aim two fingers at their temples. Rapid, squatted skittering across the stage keeps their bodies low at first, but then the dancers begin to connect with one another, reaching to one fallen comrades, then, shirts removed, they grow exuberant and wild; bodies lift and slide in gravity-defying motion before slumping again, but not for long. The dancers draw bodies to full height in swagger, heads raised, their movements evoking the body-popping and B-boy tricks of street dance, made strange and urgent in this new context. 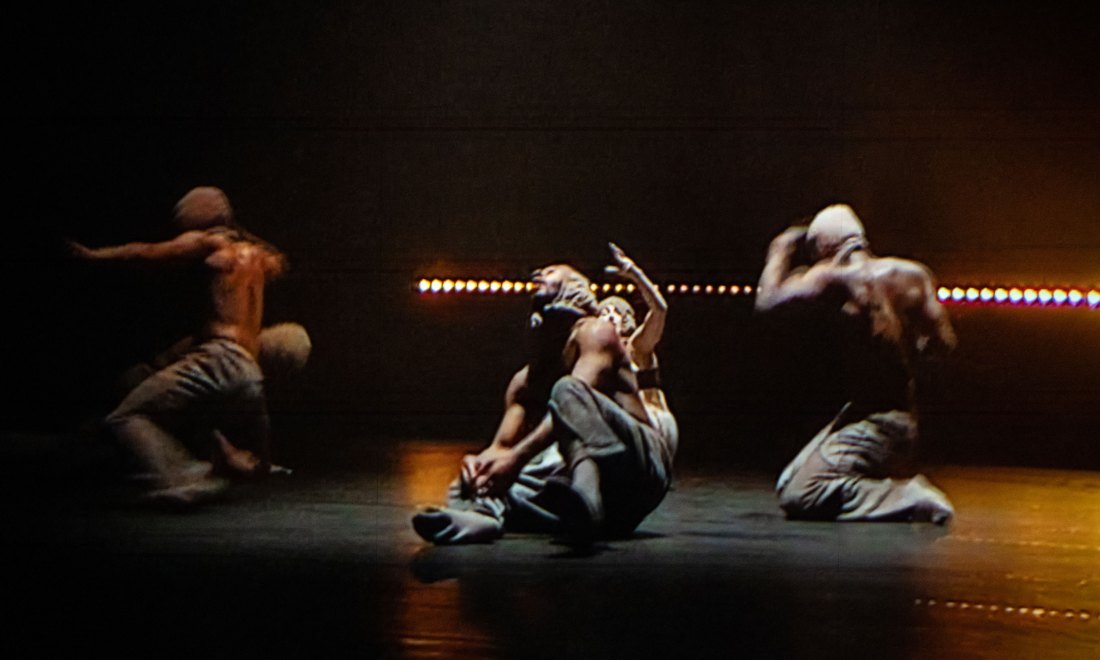 Seva delivers the body-felt truth of BLKDOG through an emotionally honest language. His artistic integrity was reflected when, due to a technical issue, the performance stopped abruptly less than halfway through, and Seva insisted the whole be shown again from the beginning. At the end of the performance, there were no bows; we were warned not to expect them before the performance. Removing that extra layer of artifice the customary end of a performance can create, the camera pans across each dancer’s face as they stand, panting, exhausted, in peace at last.

Each of the dancers brings their personal experiences to the work through the collaborative process favoured by Seva, and this honest, transformative performance is reflected in the genuine emotion we see in their faces as they listen to our long and loud applause.

BLKDOG and Six Years Later was presented at Her Majesty’s Theatre on March 6 as part of the Adelaide Festival’s Live From Europe series.