There were ideas grand and small but when a China expert, a philosopher and an author on food security shared their thoughts in a session titled What Just Happened? it was the heartbreaking story of Jimmy the pig and his sister sow Katy which showed the most powerful way to portray big events is to describe what is in front of you.

Sydney academic Danielle Celermajer began what became her book Summertime: Reflections on a Vanishing Future on December 31, 2019, almost immediately after she lived through the Black Summer bushfires on the New South Wales south coast. She and her partner were safe but Katy, one of the pigs with whom they shared their lives, had died.

“We had evacuated her and her brother Jimmy and two days later where they were was surrounded on three sides by flames and everything was incinerated,” Celermajer said.

“I assumed that Katy and Jimmy were both dead and I wrote that first piece watching the New Year’s Eve celebrations in Sydney at the same time as I was watching my community fragmenting.”

Katy had been killed but Jimmy had somehow survived, and when they picked him up a week later he seemed delighted to see them and was happy to be home. But within a day he realised the sister with whom he shared his life was gone, that he was alone and he had lived through this trauma but she hadn’t.

“He descended into a grief unlike any grief I’ve ever seen before, but he also manifested a wisdom of healing… that was really quite astonishing,” Celermajer said.

He barely lifted his head, grunted only softly and refused his favourite watermelon. He would go off and lie in the bush, near the river, and it seemed as though he was trying to get back to the earth as it was before the trauma.

“It felt tremendously important to me to write from the poignancy of the moment because one of the difficulties all of us have with climate change is that it is largely so abstract,” Celermajer said. “It felt like an urgent witnessing was called of me.”

The other great crisis, COVID, exposed the pressures on regional Australia of haphazard border closures, and journalist Gabrielle Chan said it shone new light on the need for a national approach.

“I think there are lingering questions with federation as a result of the borders opening and closing,” Chan said. “There were little niggly things but there were also life and death issues of kids who couldn’t get cancer treatment.”

It was also the year when China-Australian relations fell to a new low, triggered in the main by Australia’s support for an independent inquiry into whether Wuhan was the source of the coronavirus, and as a result, racism flared.

“Chinese-Australians are both the target and the instrument in the theory of interference; they really are caught in the sandwich of the political debate,” China expert and Lowy Institute senior fellow Richard McGregor said.

“We have to work much better on that issue, not demonise people and question people’s loyalty, otherwise we are going to be the losers. It’s a really big issue.” 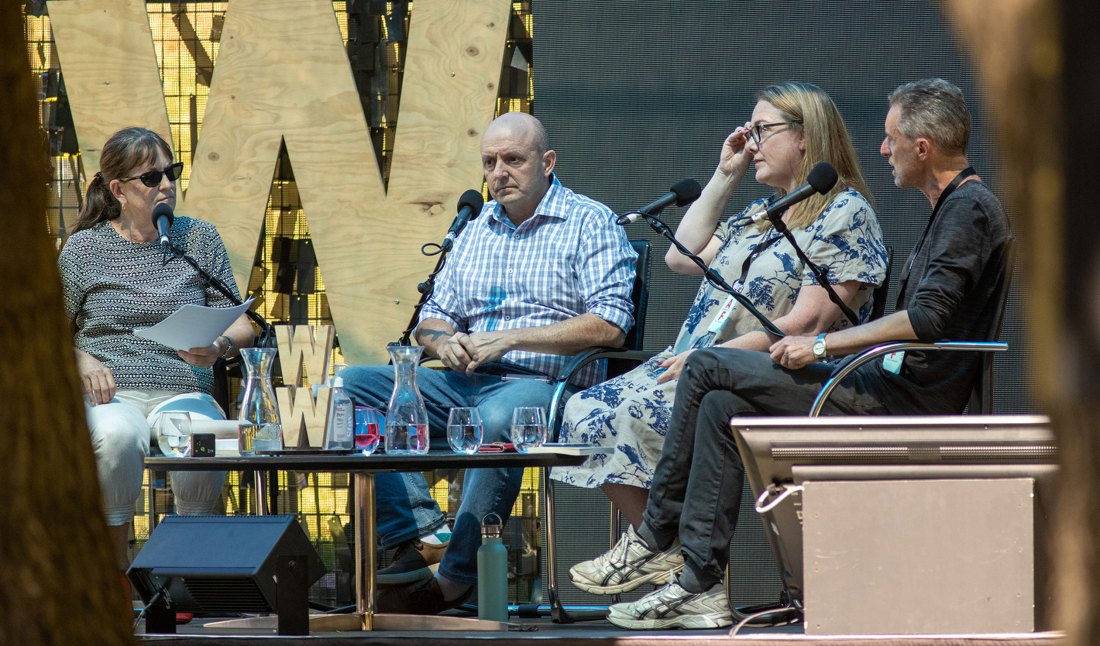 Speakers at the Writers’ Week session What Happens Next? Photo: Tony Lewis

As to where we go next, the chief economist at the Australia Institute, Richard Denniss – a radical thinker committed to plain speaking who wrote Econobabble – said the biggest lesson from the year of COVID was how little the Federal Government actually did.

“We’ve learnt that state governments do most of the work in Australia … you don’t get many people saying ‘get rid of the states’ at the moment because actually they are doing all of the work,” Denniss said.

Given the Federal Government collected most of the money while it was state premiers who were responsible for delivering services like health and education, he suggests an organised revolt.