“How do you cast a dying man in a feature film?” asks director Molly Reynolds.

That question troubled her long-time collaborator – leading Australian actor David Gulpilil – when he was diagnosed with stage-four lung cancer in 2017.

After the diagnosis, Reynolds says Gulpilil “was so keen to continue to work”. But faced with a truncated life expectancy – “they said to David, you will not see in the New Year, that being 2018” – there seemed no chance he could commit to the demands of a film role.

From this conundrum grew the idea for a documentary directed by Reynolds and produced by Rolf de Heer, who has also worked extensively with the actor. That film – ­My Name is Gulpilil – will premiere at the Adelaide Festival alongside a retrospective of his films chosen by the actor, including Storm Boy, Another Country, Rabbit Proof Fence, Ten Canoes and Charlie’s Country.

Originally, the documentary was intended to follow Gulpilil until his death. It was to capture the Yolngu elder – a keeper of cultural knowledge and man of great creative brilliance but not-insignificant flaws – as he reckoned with a life that was ending. 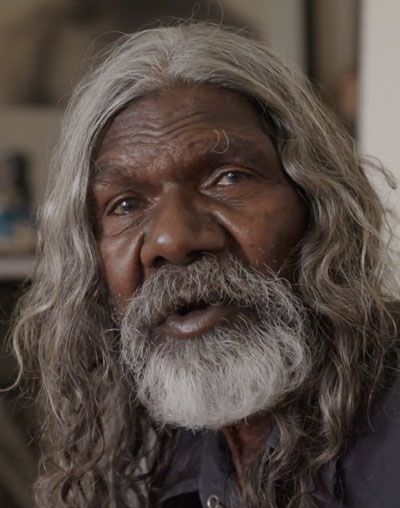 The broad theme of the film remains, but so does Gulpilil. Instead of lasting six months or a year, filming continued for four years as ­– against all odds – Gulpilil vastly outlived the predictions of his doctors.

In 2020, Reynolds and Gulpilil agreed to draw a line under the production. The team faced the edit suite with 67 days of footage to sift through. The resulting documentary doesn’t see out Gulpilil’s life, but it does contain a resolution of another kind.

“David has an enormous ego and he readily recognises and admits to that,” says Reynolds.

“What we did in constructing the doco was really work with that… I would say to David, ‘This is the opportunity for you to restore your good name and to do so we have to deal with the shit. We need to talk about when you were in prison, we need to talk about your life when you lived in the long grass’ – a term for when you’re a street dweller.

“And he did give over to it and he speaks to it very directly.”

These intimate reflections were made possible by the changing relationship between Reynolds and Gulpilil. Before beginning the project and despite their long history of collaboration, the pair were often at odds.

“Admittedly at the beginning [when we first met], David and I had a fraught relationship and it might be because he could be so bloody difficult,” says Reynolds. “In large part that’s due to the nature of his addictions which were ganja, which is what he calls marijuana, and alcohol.

“I felt that I was well placed as a documentary maker… because we had this tension between us. I felt I could do David justice. I wasn’t so enamoured of him that I couldn’t have any perspective.”

“I think David’s experience of whitefellas is they don’t stay the course,” says Reynolds. “The whitefella culture is a very difficult one for most blackfellas to trust. I had to earn my keep and I like to think I did.”

The other distinctive element of the documentary is the direct connection established between Gulpilil and the viewer. While speaking with InReview, Reynolds is careful to emphasise that she speaks “on behalf of the work David and I have made together” and not on behalf of Gulpilil himself, who is not always well enough for media appointments.

In the film, Reynolds makes equally sure Gulpilil’s story is his to tell. She took the decision to have him speak directly to the camera, rather than using the off-camera interview style more familiar in documentary.

“Few people could do it, but David could. He can just stare down the lens like no one I have ever seen,” she says.

A selection of films from David Gulpilil’s career will screen in a retrospective at Mercury Cinema.

It’s this extraordinary ability to engage that originally brought Gulpilil to prominence. His creative qualities are abundantly clear in the works picked for the Adelaide Festival’s retrospective; even in his debut role in 1971’s Walkabout, to which he brought no screen experience, Gulpilil’s ease with the camera is obvious.

The retrospective also speaks to the reasons Gulpilil has remained at the forefront of Australia cinema for more than five decades. Taken together, the collection of films reveals the actor as an important national storyteller who has significantly increased public understanding of the country’s First Nations.

“David’s body of work is a tidy snapshot,” says Reynolds. “It shows we have come a long way, but, fuck, we’ve still got a long way to go.”

In what may well be the last story that Gulpilil brings to Australians – that of his life – there will no doubt be some insight into how that progress could be made.

My Name is Gulpilil screens on March 12 at the Festival Theatre, presented by the Adelaide Festival in partnership with the Adelaide Film Festival. The David Gulpilil Retrospective takes place on March 13 and 14 at the Mercury Cinema.