“Sometimes you have to learn to be the hero of your own story,” playwright Amy Conroy observed – and this is what celebrated dog whisperer Martin McKenna achieved. Or mostly so. His book about his wretched childhood on the Garryowen estate in Limerick, The Boy Who Talked to Dogs, makes grim reading. That he salvaged himself, in the most unlikely way, is both heroic and unfathomable.

The last born of a family of eight, Marty is the third triplet. As he says in the play: “They are a two. Big brave boys. I was the runt, smaller, scareder. My mother had eight problems, and I was the biggest.”

Marty grows into an agitated and uncontrollable child. He has what would now be called ADHD; in the early 1970s it was called stubborn, disobedient and, most frequently, stupid. He does poorly at school and is persecuted by his teacher, then thrashed again by his alcoholic father when he returns home, despite his mother’s efforts to protect him.

It is only when Marty is banished to the coal shed and the company of the family dogs, German shepherds Rex and Major, that he feels any respite from his compulsive, hyper-energetic behaviour. The dogs soothe his agitation and are kindred to him. “You speak my language,” he says. “Or do I speak yours?”

Staged in the Thomas Edmonds Opera Studio at Wayville Showgrounds, The Boy Who Talked to Dogs is promenade theatre, mixed with Irish ceilidh and puppetry. In one corner is designer Wendy Todd’s cutaway replica of that section of an Irish pub where the band stand behind the wooden balustrade, between the bric-a-brac and the ancient framed photos, beneath the muted TV showing replays of Gaelic football. 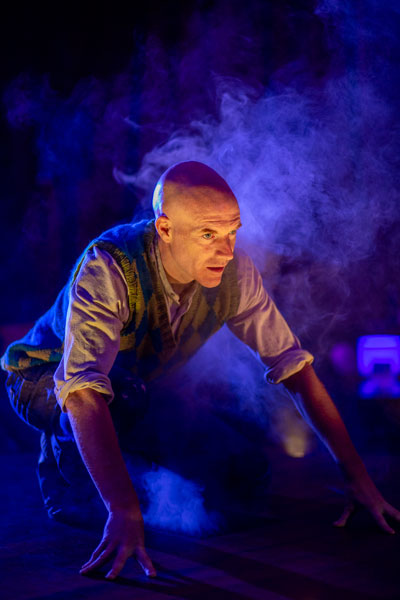 We are seated in socially-distanced tables of six, and the band – composer Quincy Grant, singer (and musical saw player) Victoria Falconer and violinist  Emma Luker – get us in the mood. The band sings “Have you heard about the boy who talked to dogs?” and Falconer summons Burroughs to begin the play.

He resists, taking cover at the side of the room.

We are meeting Marty, recalcitrant, frightened and always stressed. We are also being told this is not going to be a happy tale about a boy having fun with a bunch of doggos.

The impasse concludes as Burroughs begins his virtuosic narration – from Marty’s sorry birth up to the age of 13, when he runs away from his unbearable home and lives rough, stealing and scrounging food for himself and his dog pack, until he is 16. It is splendidly told. Burroughs is a small wiry man and he captures the boy’s resilience and his distress.

The beatings from Marty’s father, re-enacted on a circular raised stage in the centre of the room, are accompanied by the musicians, who turn it into a malevolent, pummelling jig. The scenes with the dogs portrayed by Clara Solly-Slade’s almost rudimentary shadow puppets, are the more poignant for their simplicity.

Todd’s intriguing set consists of four sections, one in each corner of the performance space. The Harp and Hound pub is in one, the meagre but heavily wallpapered family kitchen and adjoining coal shed in another. The remaining two are the hayloft, where Marty retreats with his newfound pack of six stray dogs, and the disused tunnel near the railway depot where he escapes to evade detection.

Chris Petridis’s lighting consists of four main lights on portable stands and a variety of strategically placed smaller ones including hand-held torches and table lights. His illuminated images of Marty’s pack of six, including his favourite Mossy, are particularly endearing. Andrew Howard’s intricate soundscape, punctuated with dog barking, disturbingly permeates the audience. 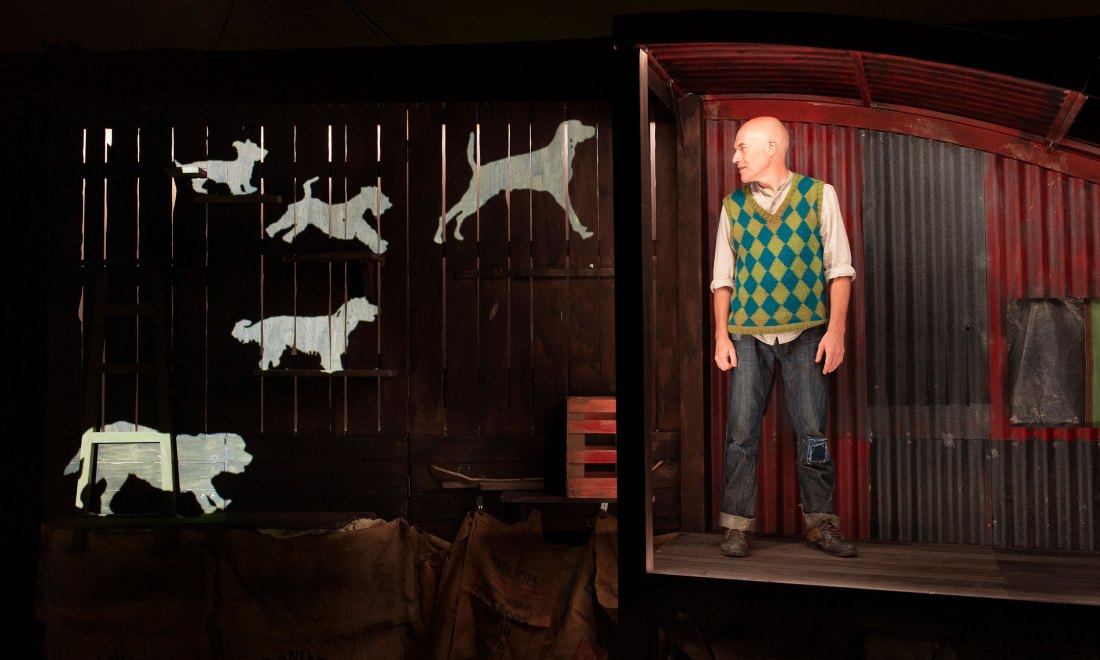 Director Andy Packer has set a task for himself managing such a large performance space and a production layered, not only with Grant’s impressively detailed score, but O’Neill’s sometimes lyrically cluttered songs. Future versions of this venture might benefit from a more confined space and a paring back of some of the music.

That said, this is very welcome new theatre which will captivate audiences, especially Slingsby’s target group of the over-12s. It would be fascinating to attend one of the many school performances to share their response.

Burroughs’ outstanding performance is undoubtedly the core and the strength of this memorable and affecting work. He navigates the space, moving unerringly through the audience to each new section of Marty’s extraordinary story. In his shabby woollen vest and ragged jeans, he convinces us he is a vulnerable child. With his shaven head he is also an ageless penitent. When he faces the enormous shadow image of his inner snarling black dog, he has learned to become his own hero.

He talks to dogs, but he is also speaking to us.

The Boy Who Talked to Dogs is playing at the Thomas Edmonds Opera Studio at Wayville Showgrounds until March 14.