From the opening lines of Thomas Gunzig’s brilliant narration, the audience is lulled into a unique miniature world where live theatre and filmmaking meld into a mesmerising performance.

As the narrator’s voice meditates on a series of seven unfortunate deaths, we watch a story unfold within a story. On a large screen, a tale of love expressed as a series of unfortunate deaths is acted out as a cinematic experience using hands as dancing performers in a miniature world. Yet equally fascinating is the live action unfolding below the screen. 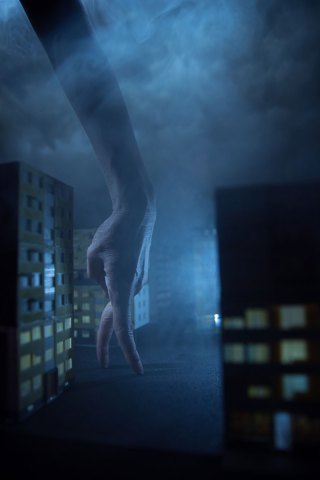 The audience’s attention is pulled between the world created on screen and the fascinating mechanics of the live action production of that world happening on the stage below. In real time, we are able to see what the camera sees within the miniature sets via the live cinema projection. But we are also privileged to see all that the camera does not capture of the bustling production of the stories within the miniature worlds with their hand-performers.

The film and the “making of” the film splay out simultaneously for an hour and a quarter of unrelenting wonder and surprise.

Fusing their skills in dance, choreography and film-making, Belgium-based couple Michèle Anne De Mey and Jaco Van Dormael dreamed this idea up at their kitchen table as a way to combine their talents and to work together. They called in a group of creative friends working in the fields of cinematography, set design, lighting and writing, and the Kiss & Cry Collective came into being.

Throughout this piece, tribute is paid to various filmmakers, musicians and choreographers, the creators tipping their hats to the greats of stage and screen who paved the way.

Shifting seamlessly between various sets and perspectives, the digit dancers flit from scene to scene, the camera capturing every movement and transition flawlessly. A forest after a plane crash, driving a lonely highway, moving through houses or apartment complexes, pole dancing, tap-dancing, at the opera or in space – every element of this performance is unique and exquisite, drawing our attention to the intimacy that arises from our sense of touch.

You would think that the revelation of the behind-the-scene mechanics would pull the audience’s attention, disrupting the immersive effect of the storytelling. But strangely, the opposite is the case, the stripping away of mystery to reveal the secrets of process and production only enhancing our appreciation of the artistry.

Cold Blood is visually stunning and technically exquisite. The dancers, camera operators, lighting technicians and set specialists have seamlessly woven a tender piece of live storytelling that is a poetic meditation on life, love and mortality. The imagination and attention to detail is exceptional, the standing ovation testament to our appreciation of its genius.

Cold Blood is playing until March 8 at the Ridley Centre, Adelaide Showgrounds.