The Doctor’s opening set (perfectly conceived by Hildegard Bechtler) exudes corporate vibes. A long table with benches sits in front of sliding doors, all blonde-wood and chrome and impersonal. Suspended in the gods is a ghostly drumkit whose drummer (Hannah Ledwidge) beats out the rhythm of the drama unfolding below.

As the drums bursts into life the cast flood onto the stage, carrying lab coats and suit jackets, the “baggage” they bring to the table. Once they’ve donned their costumes, the conversation begins.

Protagonist Ruth Wolff (Juliet Stevenson) is director of a private medical institute and the doctor in charge of a young girl who’s dying due to a self-administered abortion. The girl is calm and peaceful, ignorant of her imminent death, so when a priest (Jamie Parker) arrives to administer last rites, Wolff refuses to let him enter her room.

This unleashes a backlash of negative media attention which focuses on Wolff’s Jewish background, claiming that this has prejudiced her against the Catholic church.

The anti-Semitism that was the focus of Schnitzler’s play is very much a presence in this new version, but Icke’s astonishing rewrite floods the original with contemporary zeitgeist, expanding the subject matter to include wider issues of discrimination (race, gender, sexual preference, class). As the medical team thrash out the moral dilemmas inherent in the situation, the play fizzes with intellectual energy and the audience are held in the grip of the debate. 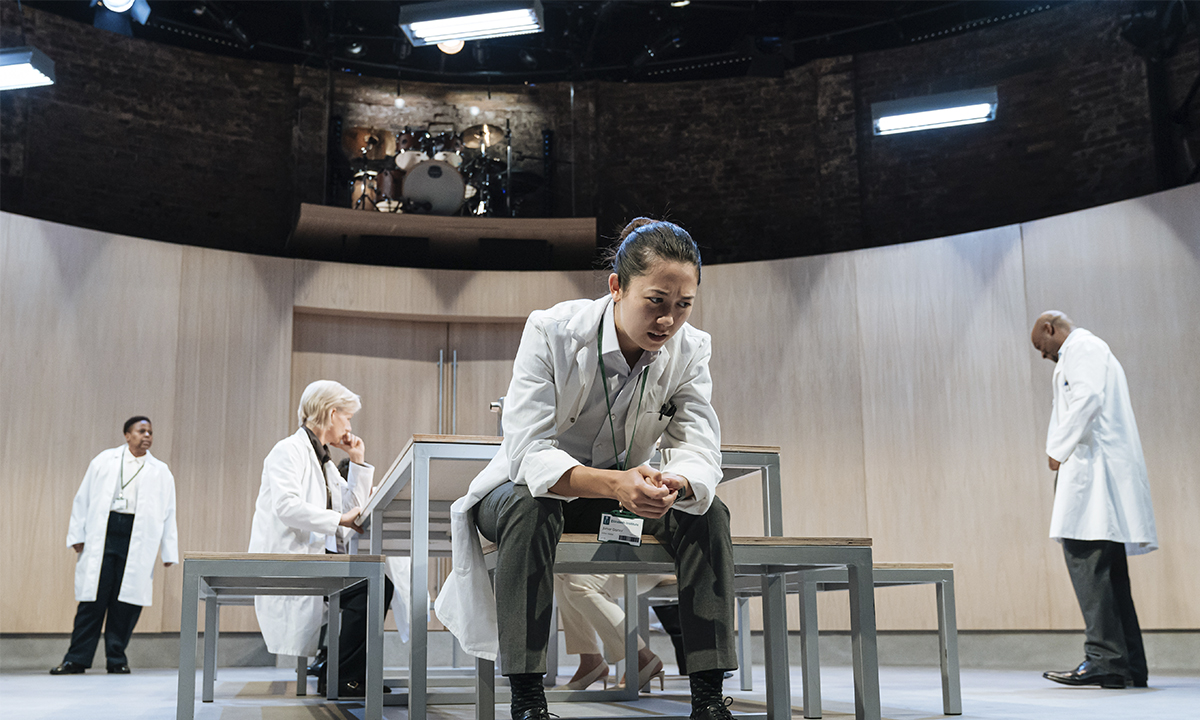 The question of whether or not Wolff was right to refuse the priest entry evolves into a much grander discourse on the nature of humanity. On the one hand, it’s human instinct to alienate people who challenge your viewpoint. As Dr Wolff puts it: “It’s only by pushing people outside your boundaries that you work out where your boundaries are.” On the other, there’s the notion that true evolution means being “woke” to the consciousness of people who aren’t like you.

There’s lots of discussion and little action but audible gasps from the audience as new information is revealed are a clear indication of how gripping it is. What’s truly remarkable about Icke’s script is the way it pulls the audience in different directions, breaking rules, challenging perceptions, showing us, quite literally, that nothing is as black and white as it seems.

Like the subtly revolving stage, our perspectives are constantly shifting, helping us to reach a clearer understanding of the beautifully complex structure of the human self, the right of each individual to self-determine and the implicit biases we all hold onto.

It’s not all down to Icke, of course. The acting is superb across the board with a notably brilliant portrayal of Sami by young actor Liv Hill (star of British film Jellyfish). But inevitably Juliet Stevenson, as Dr Wolff, is the fulcrum on which all other performances are carefully balanced. She’s predictably brilliant, her execution of the part perfectly weighted and measured, her interactions with the other characters intensely real and absorbing.

Icke’s work often focuses on language and The Doctor is no exception. “Everything is comparative, nothing is contained,” says Wolff. She’s complaining about Sami’s perceived overuse of the word “like” but she could be commenting on language itself, the slippery connections between words and meaning that can change profoundly depending on context. How to truly understand one another, that’s the question.

And herein lies the genius of Icke. His script is so richly layered with double and triple meaning that immediate unravelling is impossible. Instead, it’s the sort of theatre that stays with you, demanding consideration long after you’ve left the auditorium. And that, of course, is what theatre should be — a vehicle for starting conversations that propel us towards better versions of ourselves. Schnitzler would surely be proud of the important conversation he started. Icke and Almeida should be immensely proud of carrying it forward into a brave new world.

The Doctor, produced by Almeida Theatre, is showing at the Dunstan Playhouse until March 8.