By chance, I happened to overhear a conversation on theatre audiences before seeing this remarkable, sulphurous show about the senseless murder of a gay man, Ihsane Jarfi, in Liege, Belgium, in 2012. The argument being put forward was that as theatre asks for spectators’ attention and favour, their needs should shape the delivery of stage production.

La Reprise places sharp limits on this argument. It is unforgiving in taking audiences where they probably don’t want to go – the heart of a killing – and forensic in presenting details that will stick in their mind like hot wires. It stakes out its terrifying truth and attends to it with every device that dramatic intelligence and skill can provide.

A cross between verbatim theatre and true-crime reconstruction, La Reprise (literally, “the recovery”, “the repetition”) is a work by director Milo Rau and an ensemble of French and Flemish actors, some professional, some not. In this, spectator needs are not so much the end-point as the vehicle for the show’s raison d’être. We go to enjoy the play, of course. Once there, more importantly, we bear witness to it.

La Reprise is his first show to appear after the Manifesto, and follows all these rules: it uses at least two languages; the ensemble were centrally involved in creating the play; a significant part of rehearsals was spent outside the rehearsal room; and the set design is containable in the back of a normal-size moving van.

But it’s the Manifesto’s first rule that gives La Reprise its committed form and tone:

It’s not just about portraying the world anymore. It’s about changing it. The aim is not to depict the real, but to make the representation itself real.

Adopting a classic five-act structure, La Reprise is, on one level, very simple. It tells the story of how Jarfi died: how he got into a car with a group of drunken, unemployed youths, for unknown reasons; how they took him to the outskirts of Liege, stripped him naked and beat him unconscious, leaving him to an agonising death.

The performers start by telling their own stories. Photo: Hubert Amiel

It shows how his parents and his ex-boyfriend reacted, and the thoughts of one of the men who killed him. There is also a semi-narrator figure, though the narrative function is distributed through the cast in different ways at different times.

It’s the “how” of the story-telling, though, that makes La Reprise so startling and – to use a word too long in cold storage – engagé. The theatrical means are low-rent: a mobile video camera and a central video screen.

Initially, they tell their own story – of the development of the play, or being cast in it. Gradually, however, the actors shade into their characters. “When does the tragedy begin?” asks Tom Adjibi, the actor playing Jarfi. It’s not entirely certain. But at some point, the drama arises, like a wreath of smoke.

In the long, gruelling scene in which Jarfi is picked up, beaten up and taken to the killing ground, the action is presented twice, simultaneously: once in the theatre (real car, real rain) and once on screen (close-ups on the faces of the perpetrators, reflected lights of the passing traffic). 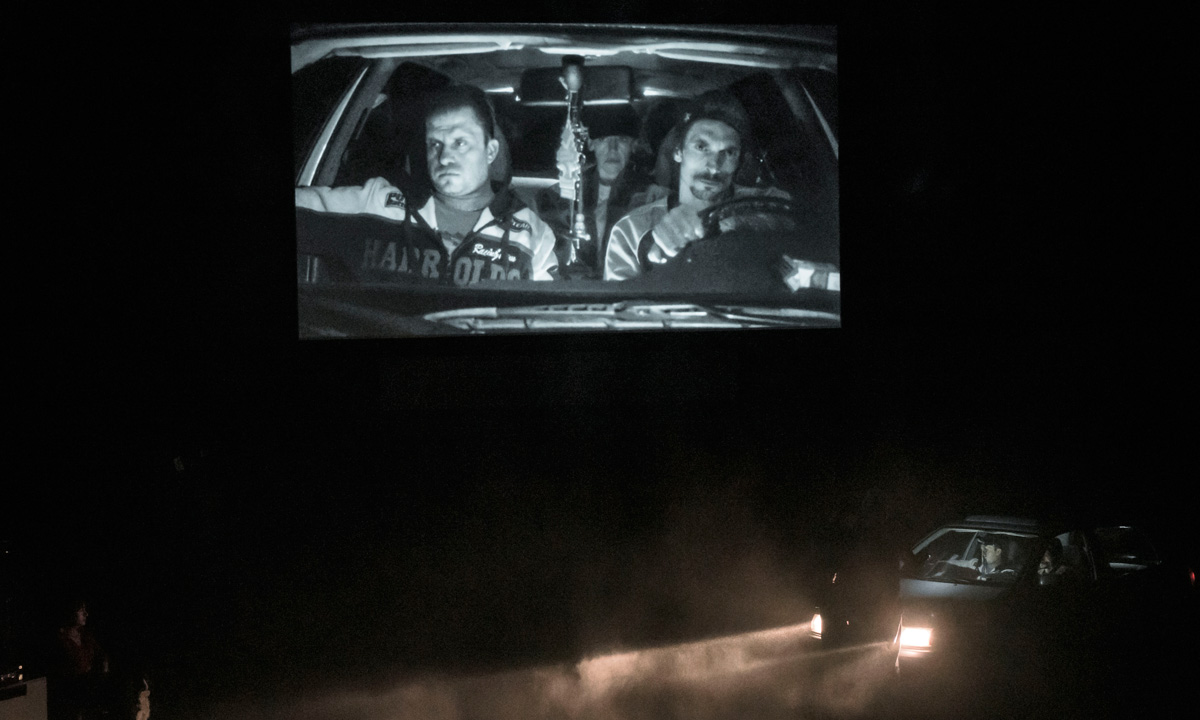 We flip between the two registers in easy moves that are uneasy in their implications. What are we doing exactly? Remembering something or reliving it?

However, before breaking out the favoured critical terms – meta(theatrical), inter(sectional), post(dramatic) – it’s worth asking what all this cleverness is for. It isn’t for performative display.

Rather, La Reprise casts a spell of invocation, a call to the dead to speak, through the medium of representational drama. Because what the dead have to say is unknown, and their experiences die with them, fracturing the dialogue and stage images in a non-linear way creates cognitive gaps in which the audience can be asked to do some of the work.

And magically we do it. This is realism at its most flexible and courageous, less a set of conventions than a compulsion to imagine the seemingly unimaginable. What were the last moments of Jarfi’s life actually like? What did it feel like for this blameless man to know he was shortly going to die?

La Reprise allows these questions to be genuinely asked and truthfully answered. Can there be anything starker and more demanding than to identify with another person at their most fateful hour?

This is La Reprise’s ultimate invocation: the call to feel something for someone no longer there, but who should be.

Julian Meyrick is Professor of Creative Arts at Flinders University. This article is republished from The Conversation under a Creative Commons licence.