Conceptually brilliant and sophisticatedly simple, Out of Chaos… is new “new circus”, unpicking its own seams and delighting in the dishevelment. Acrobats engage with the audience and each other, explaining processes and voicing their thoughts.

Like their previous smash-hit Backbone, this latest show from SA physical theatre company Gravity & Other Myths takes many of its cues from other performing arts; music, theatre and dance are employed in the exploration of narrative themes. But it’s also an unashamed celebration of “old” circus that opens itself up and pulls the audience deep into its sweaty embrace.

It begins with a single performer making his way through the audience with a torch, heading for the darkened stage. With much fumbling and adjustment, he sets himself up at a microphone, laying the torch on the floor and angling it to highlight his face, all the while mumbling a kind of internal monologue to the audience: “Yup, that’s it now, got the light working, just get the mic a bit higher, okay, that’s good.”

He’s joined by the other performers, each going through the same routine, each with their own streams-of-consciousness that rise in a chaotic chorus until they finally reach a crescendo. 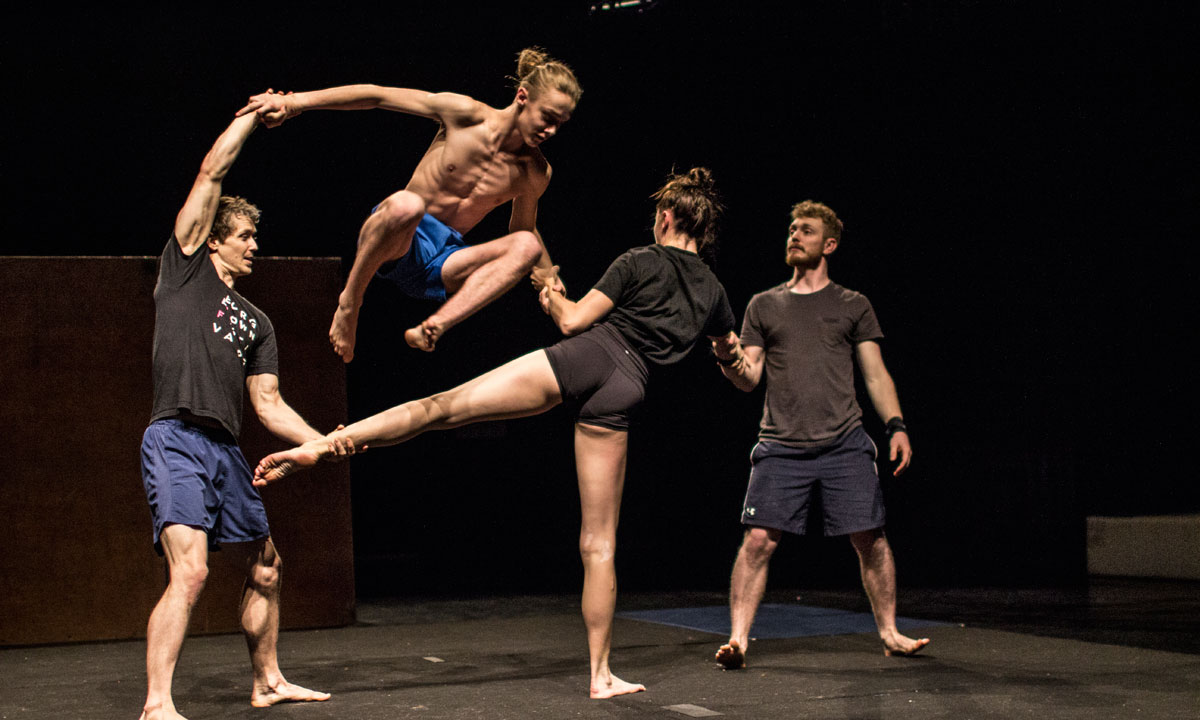 Designer Geoff Cobham and assistant lighting designer Max Mackenzie also get grungy, with nothing more than humble torches lighting these first few scenes. The effect is stunningly atmospheric, particularly when the acrobats come together to form intricate adagios, unseen in the shadows of the stage until someone shines a torch on their suspended forms.

Composer and musician Ekrem Phoenix is an intrinsic part of the show, cleverly absorbed as an active member of the ensemble who dashes round the stage with torches and mics, providing insight into the inner workings of the processes. His haunting score is a key element that brings its own magic, through technical wizardry as well as more basic means (at one stage some of the ensemble seat themselves in the audience, wielding what look like giant mortar and pestles which they grind to create a deep bass hum that forms a heart-throbbing aural backdrop.)

Acrobalance and tumbling sequences are repeated throughout the show until finally the ensemble members come together as cohesive parts of a human machine, galvanised in symbiotic motion, celebrating the intricately ordered patterns that evolve out of messy chaos.

With this brutal stripping away of showbiz, Grant smashes the fourth wall, allowing the audience to get to know the cast, to experience every grimace and knee-tremble, to wake up and smell the greasepaint.

The result is circus with a big, pounding heart and an honest, earthy soul. And with larger corporate companies Disneyfying the bejesus out of the form, it’s refreshing to see this paring back, this getting down and dirty among circus’s grassroots.

Out of Chaos… is showing at the Scott Theatre, University of Adelaide, until March 6. See more Festival stories and reviews here.