Symphony for Our World, commissioned to celebrate National Geographic’s 130th anniversary, has been performed continuously all over the globe since it premiered in San Francisco in April last year.

Rachel Healy saw one of the few other outdoor shows – in Limerick, Ireland.

“What immediately struck me was the diversity of the audience – there were tiny children, elderly people, families, young couples, teenagers.

“The response was unanimous – everyone was on their feet as soon as it finished.

“I think it’s a combination of the extraordinary footage and the live element of the music,” she adds, explaining why the show is so special.

“This was always conceived as a live event, so the orchestra and the choir are front and centre on stage.”

Each movement of the symphony focuses on a particular environment: sea, shore, land, mountains and sky.

In Adelaide the concert will be presented as a free event in Elder Park and, like previous free opening night shows presented by the Adelaide Festival, organisers expect it will attract an audience of thousands.

The symphony will be performed by the Adelaide Festival Orchestra, a 62-strong ensemble formed especially for the event and comprising current and former members of the Australian String Quartet, the Adelaide Symphony Orchestra, Zephyr Quartet and the Band of the South Australian Police, plus other emerging and freelance musicians.

They will be led by British concertmaster Thomas Gould and Perth Symphony Orchestra chief conductor Jessica Gethin, and accompanied by a 40-strong choir.

Healy says the imagery is diverse, ranging from poignant close-ups of bear cubs and a wide range of African animals, to underwater scenes and “exquisite imagery of birds”.

“It’s the catalogue of National Geographic; the most spectacular, most moving, most profound images of the world’s wildlife and the majesty of that wildlife.”

She says that for herself, seeing such images now feels different to watching nature documentaries as a child, because of the heightened awareness of the threats posed by climate change and the associated loss of biodiversity.

“There’s a bittersweet feeling when you see a montage of the world’s most spectacular wildlife, because we can’t assume this is something we’ll be seeing with our grandchildren.” 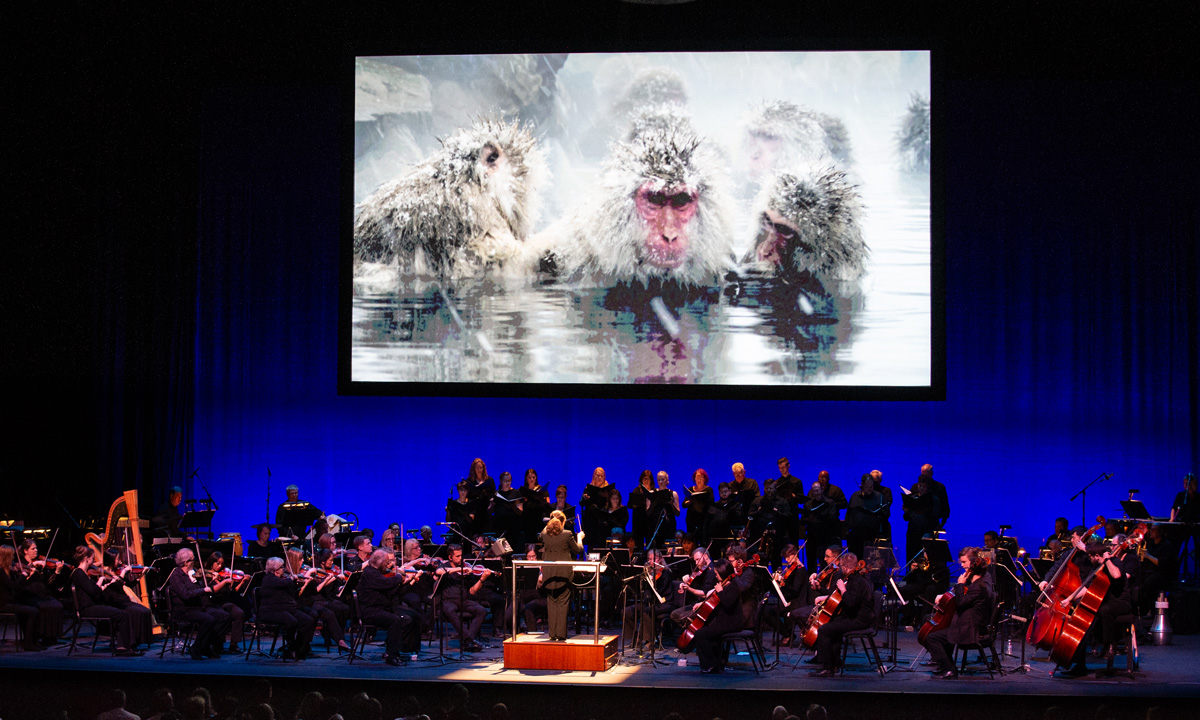 Symphony for Our World is scheduled to begin in Elder Park at 8.30pm on Saturday night, and will run for two hours (including an interval).

With large crowds expected, organisers are advising people to arrive early (gates open at 5pm), and while there will be bars and food stalls, audience members can also bring their own picnics (excluding alcohol), rugs and low chairs.

“This is a way people can be part of the festival season in Adelaide and they don’t have to spend any money at all … they can just sit on the banks of the river with their family and friends and watch an extraordinary free event that is going to feel really special.”

For more details, including a map of Elder Park showing the stage, see the Adelaide Festival website. The concert will go ahead rain or shine.