Commissioned by the Glyndebourne Festival in the UK, where it premiered last year, Hamlet was composed by Australian Brett Dean and is directed by Festival joint artistic director Neil Armfield.

Dean’s score is brilliant: his music is a combination of electronic and orchestral, including the spoken word and vocal exclamations that reflect character emotions.

Conductor Nicholas Carter brings out the best in the score and the Adelaide Symphony Orchestra in the production’s Australian debut, creating a sound experience that powerfully represents a sense of Hamlet’s madness and his torturous journey.

Armfield’s direction highlights significant moments and his use of the chorus is exquisite as their sound and physical presence is never far from the action: they are on stage, in the wings, above us in the box seats and their voices are everywhere.

Hamlet is confused and enraged by his uncle’s actions in murdering his father, marrying his mother and sitting on the throne, and Dean’s music permeates our minds and draws us into the prince’s visions of the world.

The set (by designer Ralph Myers) is a large hall consisting of white walls and a ceiling that encloses the environment, suggesting those within its borders will not escape the need to resolve the political machinations and events that have brought about disaster for a nation. Large floodlights shine through windows, casting eerie shadows and shafts of light through doorways to transform the space simply and effectively. 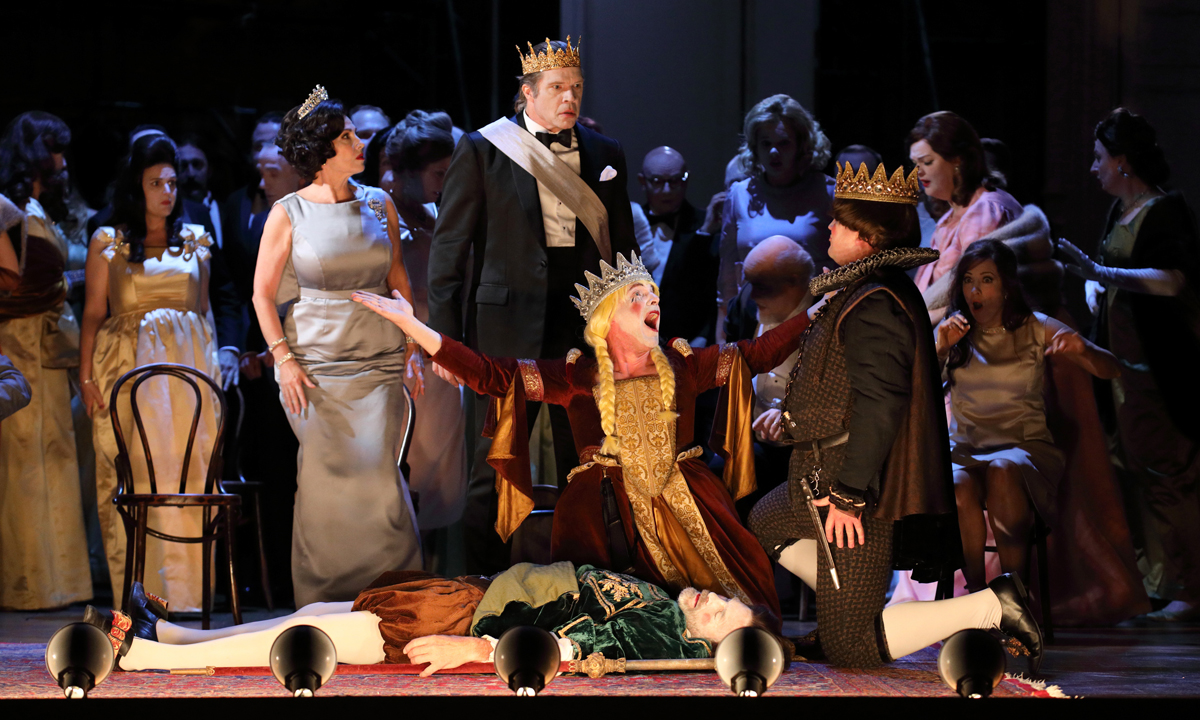 A scene from Hamlet, at the Festival Theatre. Photo: Tony Lewis / Adelaide Festival

British tenor Allan Clayton is an excellent Hamlet. Dressed somewhat scruffily and noticeably at odds with the black-tie gentlemen of the court, he finds many layers of the character: at times just an ordinary man, a young man, sometimes lost and unsure, and at others perceptive, wise, cruel and headstrong. Clayton’s voice soars with the vocal dynamics of the score.

Rod Gilfry has a smug presence as Claudius, the usurper of the throne; Cheryl Barker maintains dignity between mother and queen, and Kim Begley is noble as Polonius.

There is chilling and memorable theatricality to Jud Arthur’s appearances as Hamlet’s father’s ghost. Later, Arthur appears as the gravedigger in another scene wherein music, words and image create a metaphysical state that leads us to ponder our own existence.

There are many highlights and visual delights in this production which will stay with audience members, but the most glorious moment is Australian soprano Lorina Gore’s transfixing, mesmerising performance as Ophelia, when she is on stage singing her heart out about being loved then rejected by Hamlet. Gore is spellbinding, and while our feelings for Hamlet may fluctuate, there is no doubt our hearts and sympathy are with Ophelia. Gore makes the most of Dean’s music as she finds unique vocal ways to express her torment.

Armfield’s production of Dean’s Hamlet transfixes and transforms, bringing an invigorating modernity to Shakespeare’s genius and to opera.