Body of Work, conceived and choreographed by Atlanta Eke, was the recipient of the inaugural Keir Choreographic Award in 2014. This current piece is an extended version of the original. It fuses dance, video projection (Hana Miller and Jacob Perkins), music (Daniel Jenatsch) and lighting effects (Matthew Adey) to produce a unique performance that creates an invitation to examine the self from new perspectives.

One camera, two screens. As we settle in, we’re filmed by a camera positioned on a tripod while the live footage is projected onto the screens on stage. We’re viewing ourselves as we wait.

A lone performer, clad in cushions from an old couch, descends the stairs and turns to face us before slumping to the floor then dragging herself out of sight. A dig at the audience as comfortable voyeur, perhaps? 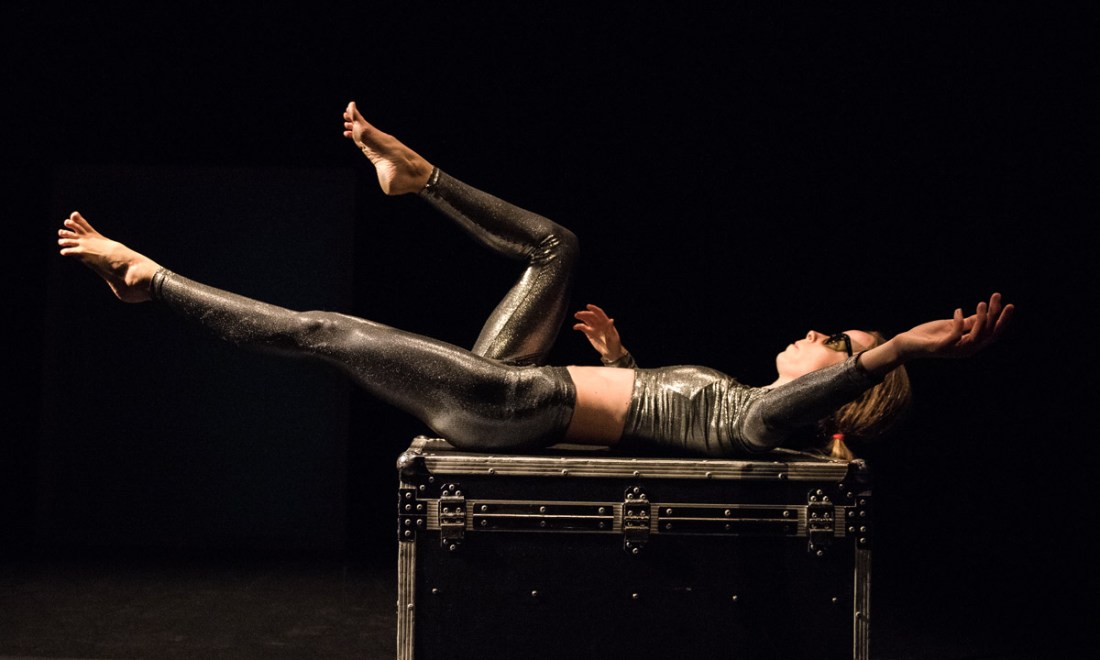 Eke, now divested of upholstery, approaches the lens before smearing her face and abdomen with thick white paint then retreating. She poses supine upon a packing crate. Her movements evoke spacewalking astronauts. Sunglasses, shiny silver crop top and tights give a cosmic, Barbarella flavour to the scene.

It’s slow and seductive, and then she’s up, adjusting the camera once again before pulling on black patent leather fetish boots and returning to centre stage. With a shudder, she regurgitates a mouthful of indigo pigment, the liquid staining her skin as it flows down her chin and onto her bare stomach.

In a series of distinct scenes Eke presents her body to the camera, each exaggerated movement fluid and arresting, captured then transformed and transmitted to the screens behind and alongside her. More props (a space helmet, gym ball and suspended cymbal) are used then discarded.

The weirdness is captivating. There’s an overriding sense of languid beauty as, over and again, Eke offers herself to us with outstretched arms,

This work has been described as “dance meets performance art” and that description fairly accurately captures the essence of what’s presented. Body of Work is a dreamy, meditative, abstract experience. It’s strangely satisfying, but whether you derive deeper meaning or not is up to you.

Body of Work is being presented by Vitalstatistix at the Space Theatre, Adelaide Festival Centre, until March 12.