A series of colourful works by South Australian artists Jake Yang, Cedric Varcoe, Bridgette Minuzzo and Sue Michael are being projected over the Festival Theatre shells at the Adelaide Festival Centre this month.

The animated projections have been created in collaboration with Electric Canvas and reflect each artists’ interests and arts practice. Yang’s work, for example, explores identity and is influenced by his Chinese heritage, while Narungga and Ngarrindjeri artist Varcoe paints the stories and dreaming of his Country.

In a new iteration of Minuzzo’s 2013 work Phantasmagoria, originally created for Adelaide Festival Centre’s 40th anniversary, layers of photos have been animated to create a series of kaleidoscopes that reference the psychedelic ’70s and the use of octagons in the building design. For the Sue Michael projections, Electric Canvas blended together more than 100 of the artist’s paintings of houses and images of extinct SA animals she created from fabric collage. 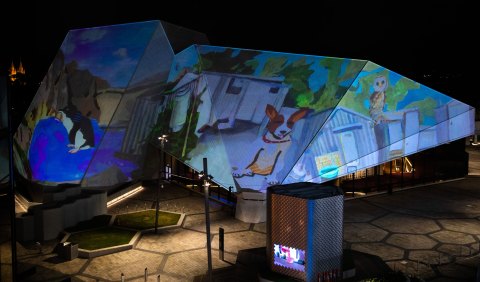 “To see these four local artists bring existing artworks from their studios and have them brought to life as animated projections that fill an entire building is a wonderful sight to behold,” Adelaide Festival Centre senior exhibition curator Charissa Davies says of the projections, which will light up the Festival Theatre shells nightly until June 2.

The Adelaide Festival Centre has this week also launched a new podcast series, From the Wings, which will feature conversations about the arts and other topics from some of its events.

Episode one, recorded at the 2021 Our Words event held as part of the centre’s annual Our Mob exhibition, is a discussion about themes of identity and representation featuring  Ngarrindjeri and Kaurna poet Dominic Guerrera, Narungga woman and activist-poet Dr Natalie Harkin, and Yankunytjatjara / Kokatha woman and poet Ali Cobby Eckermann.

Episode two and three are also from Our Words conversations, while the following three podcasts were recorded during last year’s OzAsia Festival’s In Other Words program of new writing and ideas and tackle themes including “Racism 2.0” and the cost of a free media. New podcasts will be released fortnightly.

Grab a piece of theatre history

Treasures from the Bakehouse Theatre are set to be auctioned off next week ahead of the venue’s permanent closure at the end of the month.

In a newsletter to Bakehouse supporters, theatre stalwarts Pamela Munt and Peter Green say that since the recent sold-out season of A Streetcar Named Desire they have been clearing out 24 years’ worth of costumes, props, office equipment, lights and other items. Many of the items will be sold at an auction in the Angas Street theatre at 11am next Wednesday, May 25 (they can be viewed from 9.30am). 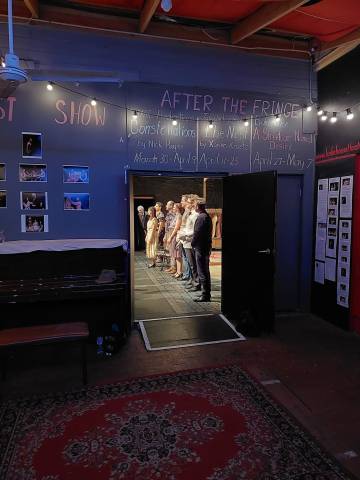 “We do hope that you will be able to come along and purchase some of these much-loved items to go into your own theatre space, or even at home,  in remembrance of The Bakehouse,” say the pair, who also thanked supporters for their patronage over the years.

As reported previously, their lease on the theatre will end on May 31 after the owners of the historic building decided to repurpose it.

Munt’s Unseen Theatre Company, which specialises in Discworld plays by British author Terry Pratchett, is one of the companies that has regularly presented plays in the Bakehouse and said in a separate newsletter that it has not yet decided whether to hire a new theatre.

Adelaide City Council voted last week to try to help the Bakehouse find new city lodgings. CityMag reported that the motion was moved by councillor Keiran Snape, who said: “I believe it’s well within our remit, and we’re well within our commitment to create a more vibrant cultural city, that we try and assist them.”

According to the administration’s report, the council’s City Culture Team is already in discussions with the State Government to examine the city’s small-to-medium theatre needs.

Chamber Music Adelaide is looking to commission four composers to write new chamber works that will be performed within the INVISIBILITY exhibition at MOD. at a special event later this year.

INVISIBILITY, which is showing at the museum of discovery until November, shines a spotlight on “the unseen”, with works exploring themes relating to issues such as data privacy, climate change and social justice.

For the CMA commission, three established composers will be awarded $7000 to each compose a work of up to four parts expressing these ideas of invisibility through music, with the seven to 10-minute pieces to be performed by a small SA chamber ensemble. One early-career composer will receive $2500 for a work of four to six minutes.

“Not only does this project represent a new partnership and new ways of working, it supports and adds to the depth of chamber music in Adelaide,” says Chamber Music Adelaide director Janet Carey, who is coordinating the program.

The commission is open to all composers living and working in South Australia, with applications closing on May 23 (details here).

In addition to premiering at the special event at MOD. in October, the works will also be performed the following month as part of CMA’s On the Terrace program, which is this year being extended to two days. 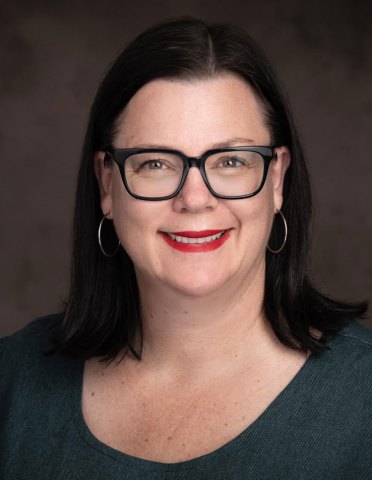 Christine Schloithe has been appointed as Music SA’s new CEO, with the organisation saying she will help develop a strategic plan and road map for the next few years that will strengthen South Australia’s contemporary music sector.

Schloithe, who will take up her new role on May 23, has experience across the arts and culture and events sector, having previously held positions at Carrick Hill, Adelaide Fringe, Adelaide Guitar Festival, the Botanic Gardens and the Department of Premier and Cabinet.

“I’m excited to be joining Music SA at this time of change and rebuilding,” she said in a statement. “COVID-19 has been devastating for arts and culture, live music, events, festivals and tourism, and we can now start to rebuild and take advantage of new opportunities.”

Music SA will tomorrow launch its annual open-access live music festival Umbrella, which runs across the month of July. 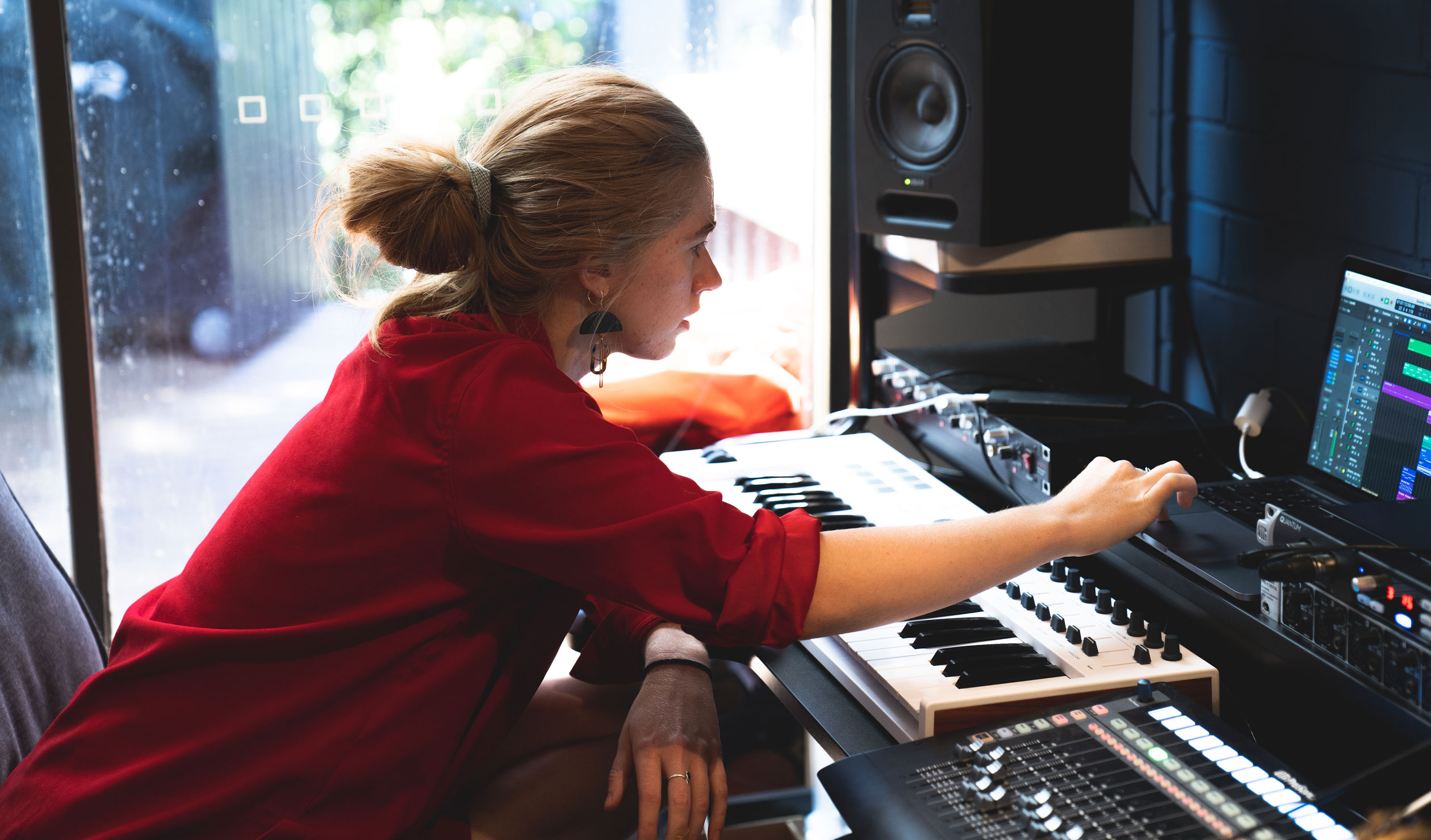 Carclew has awarded more than $70,000 in grants to 11 South Australian young artists to help them develop creative projects, enhance their skills and develop their careers.

The project and development grants are offered twice a year to early-career creatives aged 26 and under. They cover projects across a range of genres including film, music, dance, literature, visual art and digital art.

The latest recipients include filmmaker Luca Sardelis, who received $10,000 for her short film The Night Bus, described as a coming-of-age romantic drama; emerging author Kienan McKay, who will use his $9876 to help complete a young adult novel, and actor and playwright Arran Beattie, who was awarded $10,000 to create an experimental theatre work for Rumpus Theatre’s 2022 main season.

Applications for the next round of Carclew’s project and development grants will open in mid-July.

NSW-based artist Matthew Curtis has been named the winner of the 2022 FUSE Glass Prize presented biennially by JamFactory. 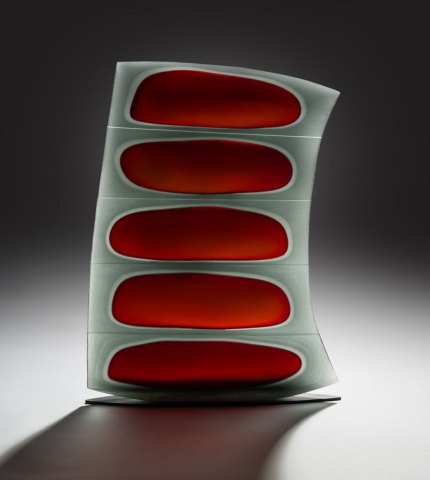 Selected from 12 finalists from Australia and New Zealand, Curtis won the $20,000 prize for a sculptural work titled Margin, which judges said showed a deep understanding of the material properties of glass.

“The piece holds light within, while the brightness of colour and levels of translucency change and delight as you move around the form,” said judge Cobi Cockburn, winner of the 2020 FUSE Glass Prize.

The work of all 18 finalists is on show in the 2022 FUSE Glass Prize exhibition at JamFactory until July 3.

Guildhouse has announced the guest curators for its 2022 reVision Speaker Series, with each set to curate a season of two online sessions featuring artists, curators and arts practitioners from across the country.

The first season, to be presented in June and curated by Coby Edgar (curator of strategic projects, First Nations, at the Powerhouse Museum in Sydney) is titled Level-Level; the roles and contributions of non-First Nations peoples in First Nations industries, lives, and culture. Guildhouse says it will explore “colonist cancel culture, relationships, and power dynamics, and what true, fair collaboration looks like”.

Melbourne-based Aboriginal curator Hannah Presley will curate the second 2022 reVision Speaker Series in September, with details of those sessions to be released later in the year.

The series was developed in 2020 in response to the challenges posed by COVID-19 and is now presented annually to deepen connections and strengthen the practices of Australian creatives. Tickets for Level-Level are available now (details here).