The Tarnanthi Art Fair has notched up a record $1.4 million in sales in its first year as an all-online event.

The Art Gallery of SA, which presents the Art Fair as part the Tarnanthi Festival of Aboriginal and Torres Strait Islander Art, announced the results this morning, saying buyers from Australia and overseas bought more than 2500 works including paintings, ceramics, sculpture, woven objects, jewellery, textiles, clothes and homewares.

The 2021 event operated through a digital portal from October 15-18 and included art from more than 50 Aboriginal art centres across the country. It marked a departure from other years, in which the art fair has been held at a site in the CBD, and surpassed the previous record sales figure by 16 per cent. All the proceeds go direct to artists and their art centres.

Tarnanthi Festival continues until January 30, with exhibitions at the AGSA and partner venues (see our earlier story for highlights).

OzAsia Festival also has cause for celebration, with a record number of people attending opening weekend events ­– including 40,000 who flocked to the Moon Lantern Trail, which was held over four days and featured more than 30 giant lanterns.

“After an online offering last year [due to the pandemic], it’s fantastic to come back to our biggest attendances of any OzAsia Festival opening in the 15 years since its inception,” says Douglas Gautier, CEO and artistic director of the Adelaide Festival Centre, which presents the festival.

OzAsia continues until November 7 with a program encompassing music, theatre, dance, visual art, film, literature and family events. The food and storytelling experience Double Delicious, at the Intercontinental Adelaide, has already sold out, but other events this week include a stand-up comedy special at Her Majesty’s Theatre, immersive shadow-play show Perahu-Perahu at the Space Theatre, and Filipino music celebration Pinoy Street Party at Nexus Arts.

Lucky Dumpling Market, which reported the busiest weekend in its five-year history over the festival’s opening days, is also in Elder Park for the duration of OzAsia. See the full OzAsia program here and read more festival stories and reviews on InReview here.

$7m in support for SA arts and music

The State Government this week announced a $7 million support package for the arts and live music in South Australia.

Initiatives include an Arts Recovery Fund that will see $2.4 million in grant funding available for  “activity which directly employs” professional practising artists and arts workers and $1 million to support collaborations in 2022. Adelaide Fringe will receive $1.45 million to disperse through a mixture of grants for independent SA artists and money to help Fringe hubs support COVID-safe operations, with $350,000 also earmarked for a new drone show that will run throughout the festival.

A Live Music Support Package will provide grants to live music venues and music industry event promoters, artists and crew who have lost income through the pandemic

In a statement, Premier Steven Marshall acknowledged that the arts and live music have been among the industries hit hardest by the pandemic: “As we get closer to the re-opening of our borders to interstate and international travellers, it is imperative that our arts and cultural organisations, live music venues, artists and promoters are in a position to resume operating as soon as the restrictions lift.”

The Government says details of the support packages will be available soon on the Arts South Australia and Music Development Office websites.

Changing of the guard

The Adelaide Symphony Orchestra and Adelaide Chamber Singers have both announced new appointments this week. 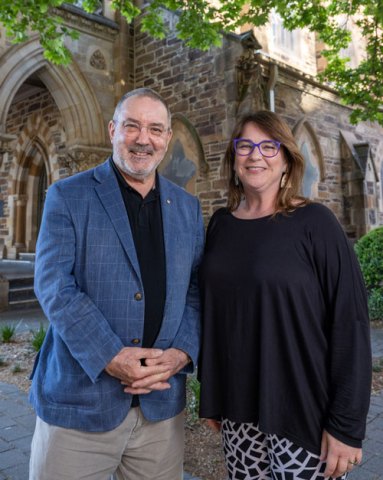 After 36 years of service, the Chamber Singers’ founding artistic director and conductor Carl Crossin will step down at the end of the 2021 season and hand over the baton to long-time associate conductor Christie Anderson.

Crossin formed the choral ensemble in 1985 and says that at the time he was “blissfully unaware of how vital – how all-consuming – this ensemble would become in my musical life”.

In the ensuing years, the Chamber Singers have undertaken eight international tours and won numerous awards, including two “Choir of the World” awards and a Ruby Award (presented by Arts SA) for “sustained contribution by an organisation”.

“I think I’m something of a perfectionist, and my hope is that I leave the singers with a deep and enduring love of chamber choral singing, and a powerful need to always explore ‘the new’, ‘the different’ and ‘the better’,” Crossin says.

For Anderson, who is also artistic director for Young Adelaide Voices, becoming artist director of the Adelaide Chamber Singers marks the “realisation of a long-held dream”. One of the Chamber Singers’ first major performances next year will be in the oratorio Watershed: The Death of Dr Duncan, announced yesterday as a highlight of the 2022 Adelaide Festival.

Meanwhile, Andrew Daniels, CEO of the Adelaide Oval Stadium Management Authority, has been formally appointed chair of the ASO after serving as interim chair for the past three months following the departure of Kate Gould.

Daniels has been a member of the organisation’s board for three years and has extensive experience in major projects and events management with previous roles at organisations including the Motor Accident Board, Australian Major Events and the SA Tourism Commission.

Full steam ahead for Film Festival

The 2022 Adelaide Film Festival will be held from October 19-30, with organisers announcing the dates this week and calling for film submissions for the program.

Submitted films can include feature films, feature documentaries, series, shorts and VR works made in Australia and internationally of any length or genre, with full details on the AFF website. The closing date for submissions is June 22.

The 2022 Film Festival will be the second biennial program helmed by CEO and creative director Mat Kesting, with the 2020 event the first major physical film festival presented in Australia after the first wave of COVID-19 restrictions.

“After the turbulence and disruptions of the past year and a half, the Adelaide Film Festival board and staff are delighted to be working towards presenting an incredible program in 2022, where once again lovers of film and screen arts more broadly and filmmakers themselves will be able to come together in Adelaide to enjoy the inimitable shared experience that cinema brings,” Kesting said in a statement.

Livening up the laneway 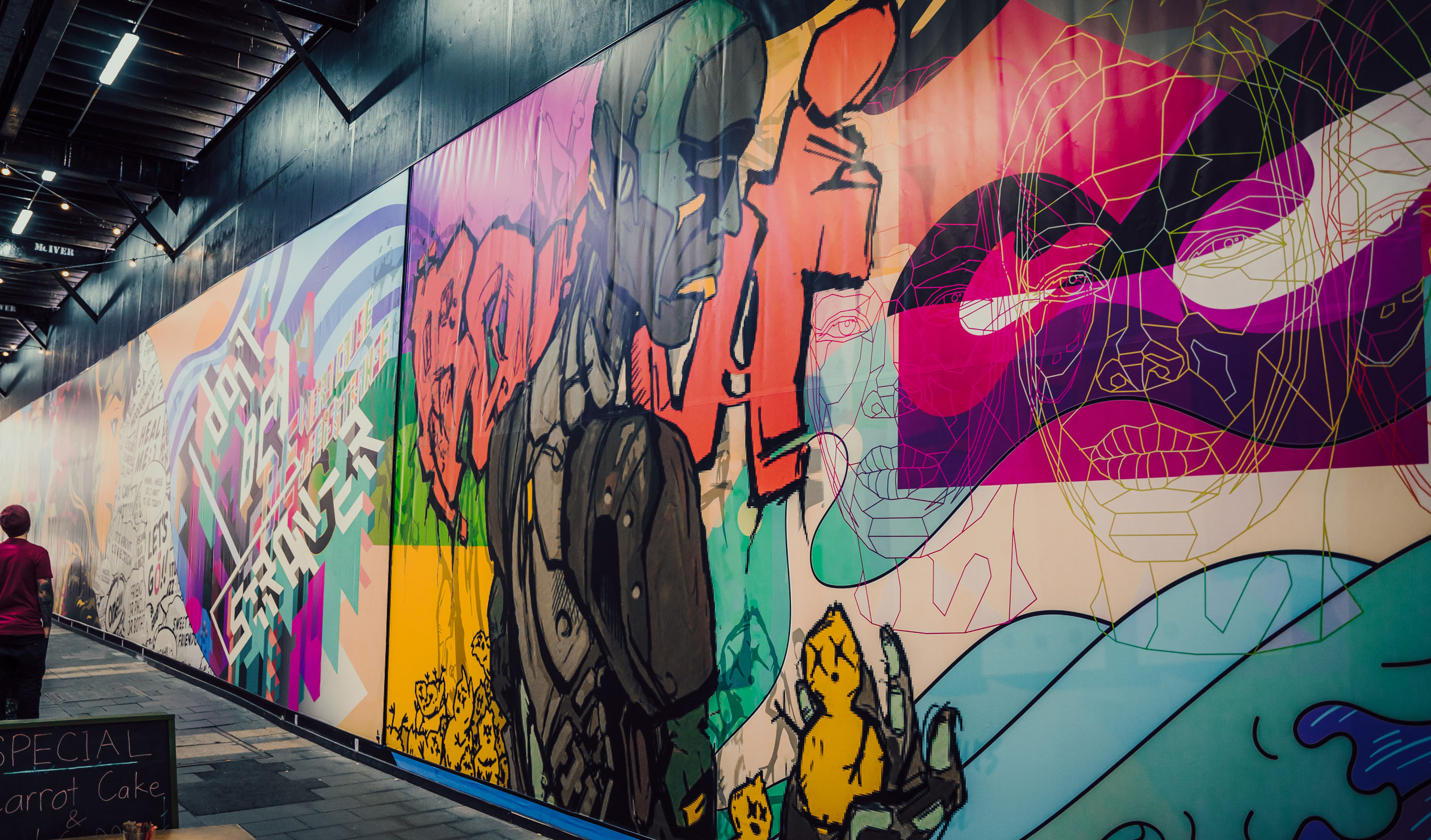 A colourful 50m-long by 4m-high artwork by Adelaide artist and designer Matt Kavanagh has been unveiled in the James Place laneway alongside Charter Hall Group’s $450 million office tower development at 60 King William Street.

The group commissioned Kavanagh to create the piece on the boards surrounding the construction site “to inject vibrancy and life” into the laneway during the building period.

The artist says his new work intends to showcase “Adelaide’s small-city idiosyncrasies and multiculturalism through the use of a variety of styles and mixed media within the one piece”, adding: “I hope people feel engaged when they see the artwork and take a moment to go on a little journey.”

The 60 King William Street development, which sits on the Southern Cross Arcade site, will includesa 14-storey office tower plus a retail, food and lifestyle precinct that links to Rundle Mall, James Place and King William Street.