A wall adorned with a vivid design by John Prince Siddon immediately grabs visitors’ attention as they descend the stairs to the basement galleries showcasing work in the Art Gallery of South Australia’s Tarnanthi exhibition.

A suite of paintings the Walmajarri artist has created on kangaroo pelts (Fur Stories) emerge from the repeating pattern – all featuring animals and birds, with one particularly poignant picture showing a weeping woman holding a burnt koala.

Sitting nearby is Prince himself, visiting Adelaide for the first time from his home in Fitzroy Crossing, Western Australia. “My painting is about what I see on TV – I watch TV and I get my ideas from there, like that big bushfire,” says the softly spoken artist, referring to the Black Summer bushfires and how he was moved by the images of injured koalas.

The fires inspired the original painting which was adapted for the wallpaper, which shows insects hitching a lift on other animals. “They’ll be slow to outrun the fire,” he explains. “What the insects do is they’ll probably hop on a big animal like the kangaroo and the kangaroo will take them out. Some will make it, some won’t.”

Prince works out of Mangkaja Arts at Fitzroy Crossing, and a series of his paintings – often described as psychedelic – are on display at the gallery, as well as adorning the building’s façade and the 2021 Tarnanthi book. They’re richly detailed and multi-layered, incorporating imagery and ideas from traditional culture and contemporary issues such as climate change. “I do, like, 12 different paintings in one,” he says.

The 2021 Tarnanthi Festival was launched last night at the Art Gallery of SA, where it was also announced that BHP will continue its support as principal partner of the event for a further three years. This year’s festival features the work of more than 1400 contemporary Aboriginal and Torres Strait Islander artists from across Australia: 400 in exhibitions at the AGSA and partner venues, and a further 1000 in this weekend’s Tarnanthi Art Fair, which opens online tonight.

It is the sixth iteration of the festival, which AGSA director Rhana Devenport describes as “forging a dynamic and porous state-wide platform for the torrent of creativity that is Aboriginal and Torres Strait Islander art today”.

While the pandemic meant artists were unable to travel to Adelaide for the opening of last year’s Tarnanthi, a number have come from different parts of the country to be part of this weekend’s launch celebrations.

They include Torres Strait Islander artist Gail Mabo, whose bamboo installation, Tagai, is inspired by stories told to her by her famous father, the late Eddie Koiki Mabo. It is based on an important navigational tool, a “star map”, which takes the shape of a great fisherman named Tagai in his canoe. 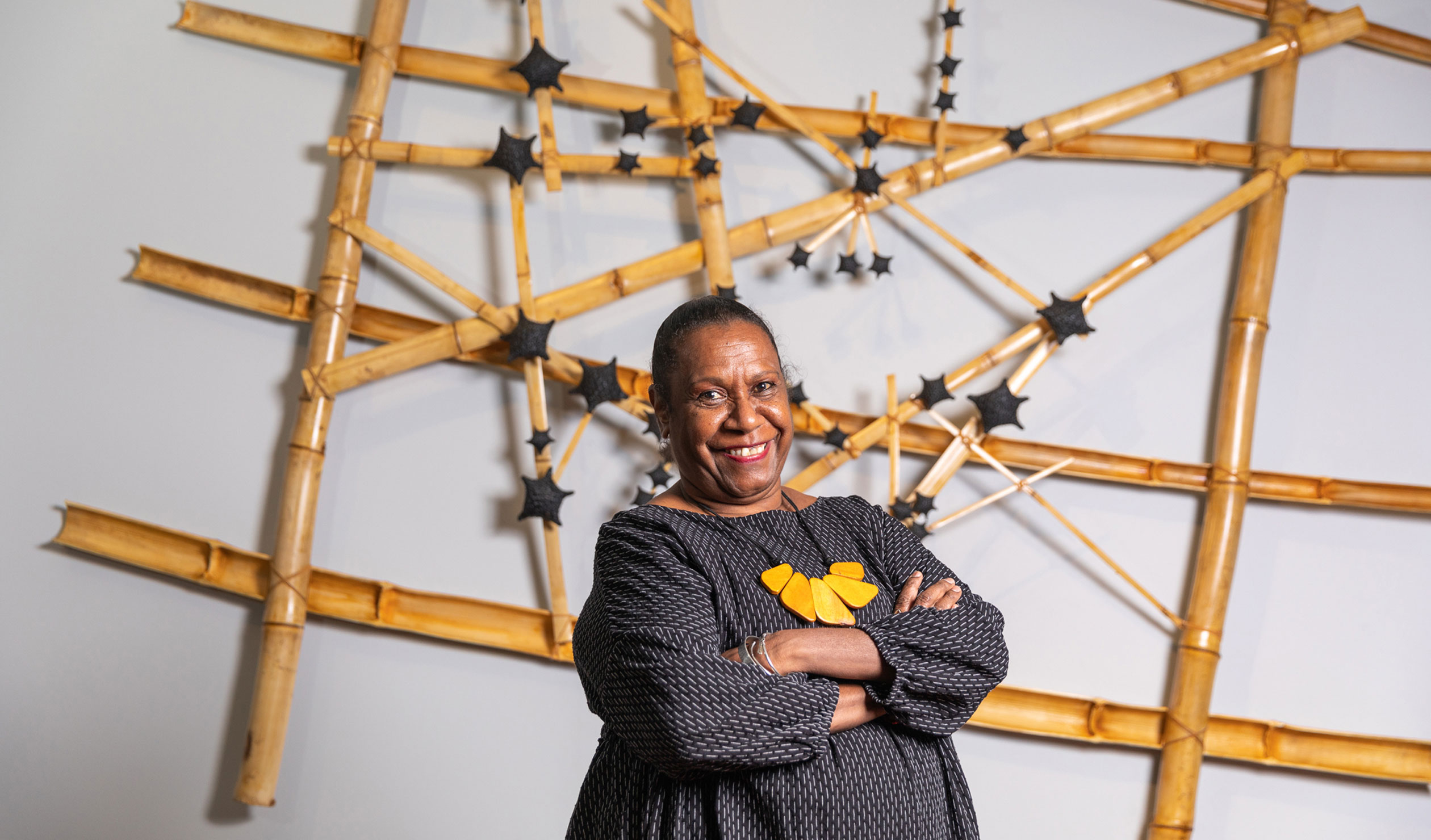 She collected the bamboo for this installation from James Cook University in Townsville, where her father tended it as a university groundsman. The stars on the piece are made from grains of sand put under a microscope, enlarged and then printed with a 3D printer.

“When I was eight and the first time I went to the Torres Straits, Dad dropped sand onto my hand and we moved the grains and we saw the stars – the grains of sand were shaped like stars,” Mabo says, explaining her inspiration. “So I’ve used those things that I’ve connected to since I was small… for me, that’s my connection to Dad.”

For Mabo, stories are crucial for keeping culture alive and strong – something that is reflected through all the works on show during Tarnanthi Festival. 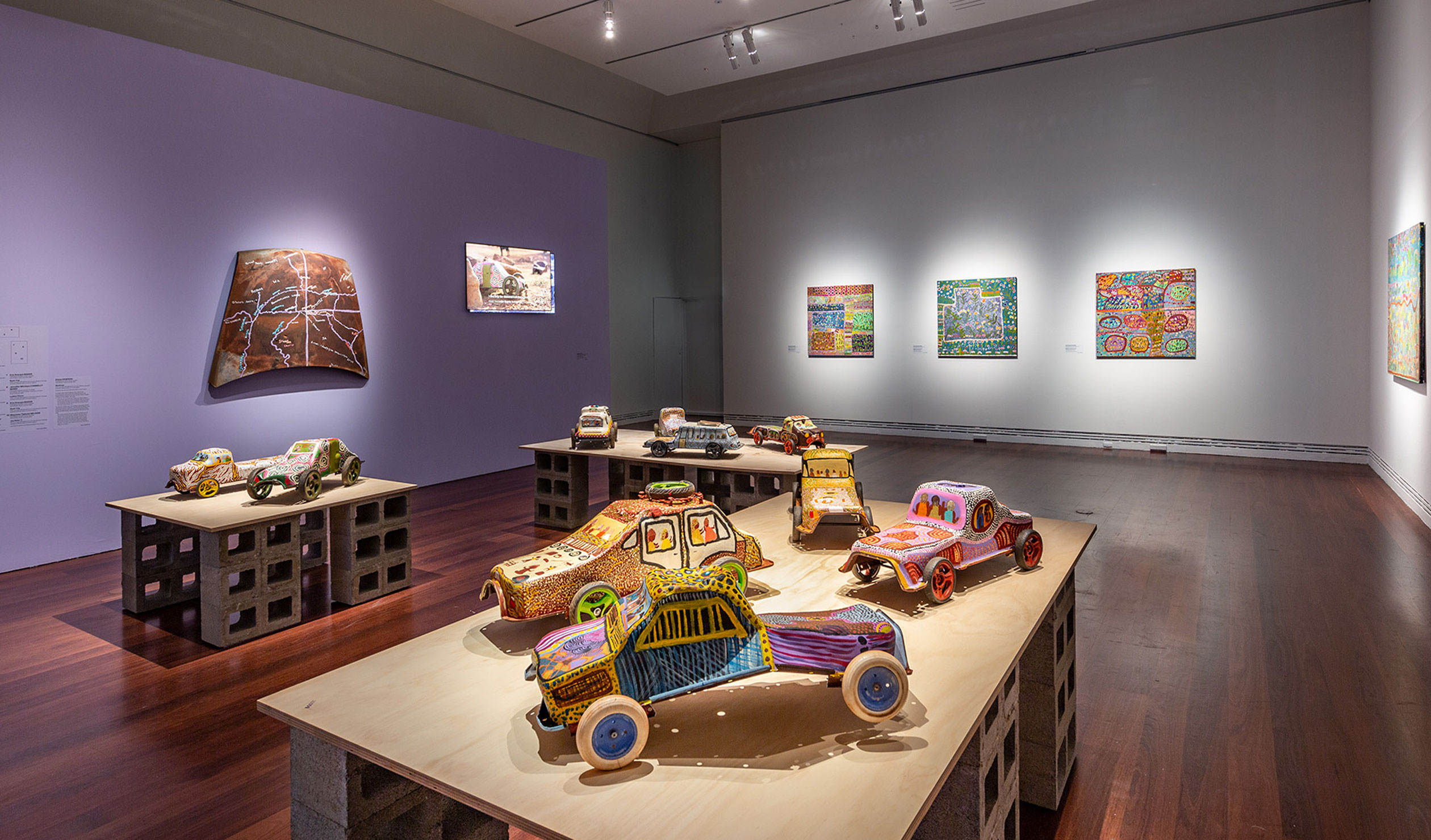 “Boab birds” carved by nine artists from Waringarri Aboriginal Arts in the Kimberley region take flight across one wall of the basement galleries, while another space showcases colourful paintings on miniature cars made by artists from the remote Irrunytju community, in the Ngaanyatjarra Lands of WA, using salvaged parts from vehicles abandoned in the desert. 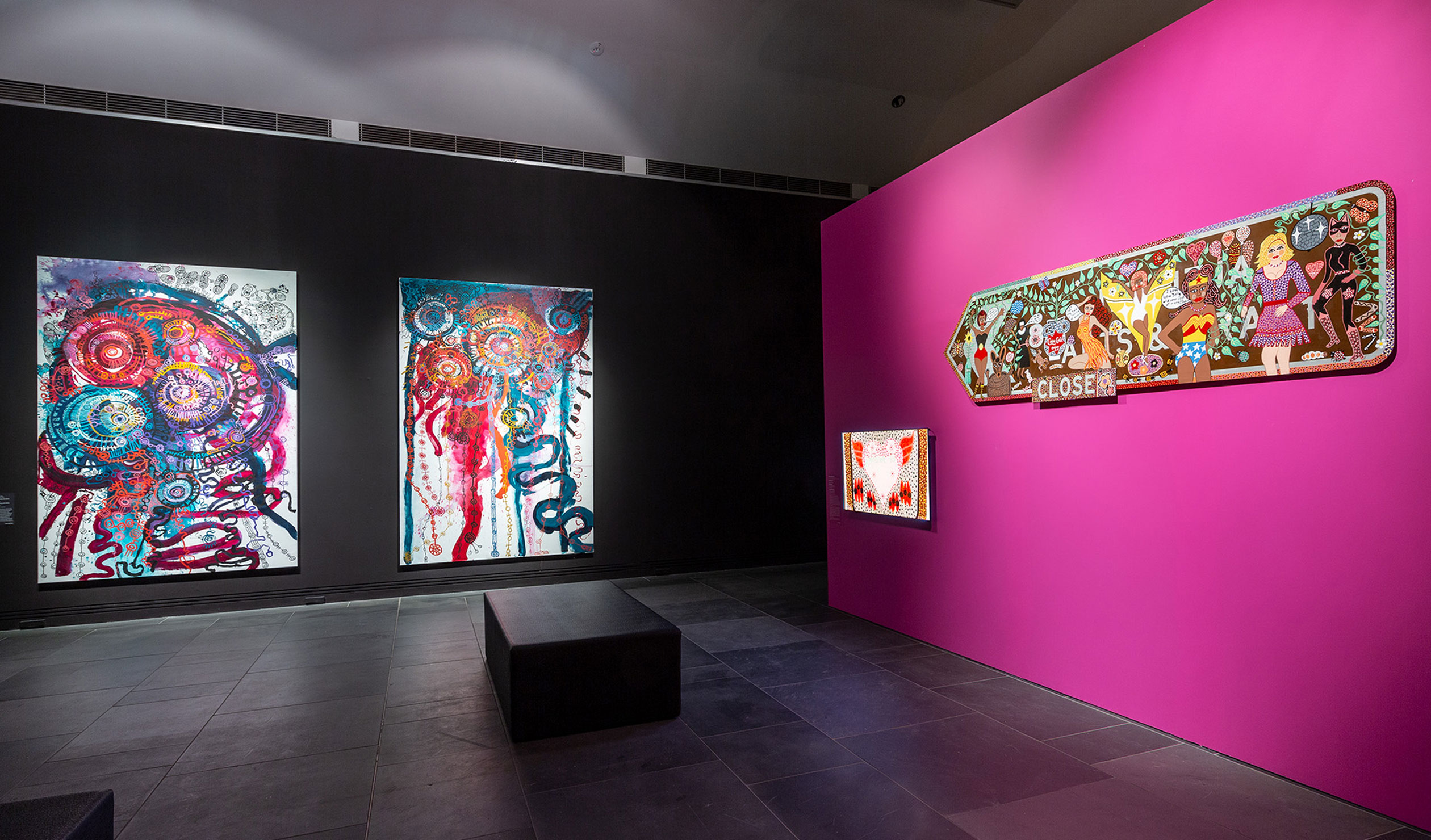 With 60 exhibitions and events taking place at the AGSA and in more than 30 other venues until January 30, Tarnanthi artistic director Nici Cumpston urges people to visit as many as they can.

“We have the length and breadth of the country covered in the artists who are showcasing their work, not only here at the Art Gallery of South Australia, but also across the city and state,” she told yesterday’s media launch.

“This is a way for us to be able to learn about each other’s stories and, in some instances, it is one of the only ways to hear the stories of Aboriginal art and cultures.”

Details of the online Tarnanthi Art Fair (October 15-18), artist talks and other opening weekend events, and all Tarnanthi exhibitions can be found here.

Highlights in partner venues include:

Across the Generations – 60 Years of Art Making:  Vibrant paintings, batik, punu (woodwork) and tjanpi (grass) woven baskets are on display in this exhibition at the Hahndorf Academy celebrating 60 years of the Kaltjiti Arts Centre in the remote community of Kaltjiti/Fregon in the APY Lands. Featuring historical and contemporary pieces, Across the Generations showcases the skills and creativity of the original Kaltjiti artists and their descendants, while highlighting stories that have been passed on through generations.

Ngura Pulka – Epic Country: APY Gallery’s Tarnanthi exhibition centres around a 3m x 3m painting by Matjangka Norris, a senior artist and law woman from Kaltjiti Community in the Aṉangu Pitjantjatjara Yankunytjatjara Lands, and also features works created in response to the title by emerging artists from the APY Lands. It includes a digital augmented-reality experience of Mrs Norris performing the inma (cultural song and dance) of the traditional story told in her artwork.

Ngayuku Kamiku Ngayuku Tjukurpa (My Grandmother, My Story): This exhibition at JamFactory Barossa sees emerging artist Selinda Davidson, from Ninuku Arts in the APY Lands, present a series of paintings translated onto glass vessels, the result of a mentorship with glass artist Clare Belfrage. The new glass works are displayed alongside a selection of paintings by Davidson’s grandmother, Molly Nampitjin Miller. JamFactory is also hosting several Tarnanthi exhibitions in its Adelaide galleries showing works ranging from wood carvings to soft sculptures and textiles (details here).

APRON-SORROW / SOVEREIGN-TEA: Described as a “powerful reckoning with Aboriginal women’s domestic labour in South Australia”, this work by Narungga poet, artist and academic Natalie Harkin draws on oral history, the state’s official record, archival-poetics and video installation. Harkin has worked with collaborators including Unbound Collective and Aboriginal women in South Australia to make the multi-disciplinary installation, showing at Vitalstatistix in Port Adelaide.

Yes, I Am Musical: Adelaide artist Troy-Anthony Baylis’s work was showcased in his solo exhibition Nomenclatures at the Art Gallery of SA during last year’s SALA Festival. For Tarnanthi 2021, he is presenting a new show at Hugo Michell Gallery that takes its name from a coded 1950s question used to identify gay men: “Are you musical?”. It comprises three bodies of work, including a major new piece in his Glomesh and ‘faux-mesh’ Postcard series.