“This exhibition is really showcasing that engagement between generations,” Tarnanthi artistic director Nici Cumpston says of Open Hands, which opens today at the Art Gallery of South Australia.

“There are many mothers and daughters who are working together; there are aunties, there are sisters, there are mothers, there are children and grandchildren. And when you look deeply at each of the relationships between the artists in the exhibition, you can see that play out.”

The Tarnanthi exhibition of contemporary Aboriginal and Torres Strait Islander art has been presented annually by the AGSA since 2015 and is usually celebrated with a gala launch at the gallery attended by many of the exhibiting artists.

This year, due to COVID-19, a livestreamed online launch was held last night instead, with video portraits of some of the 87 artists from across Australia who have created works in a range of media including painting, weaving, ceramics, photography and multi-media.

Two artists who are present for the opening weekend are mother and daughter Sonja Carmichael and Elisa-Jane Carmichael, from Minjerribah (North Stradbroke Island), whose cyanotype designs grace the gallery façade and the entrance of the Open Hands exhibition.

Cyanotype is an early photographic printing process that produces cyan-blue prints, and the Carmichaels have used it as a way to document and regenerate traditional Quandamooka weaving practices that they say were almost lost to a generation. Their delicately woven bags and traditional weaving fibres are placed on fabric – alongside items found on the beach ­­– to create the prints.

Elisa says the works they are showing in Open Hands were all made on Stradbroke Island during COVID-19.

“We decided to make this body of work which was about our country and our weaving, and reviving our weaving and language and stories of our land, and sharing it through cyanotype.

“It’s really special because cyanotype is one of the first forms of photography… we placed these beautiful materials which are both natural materials and found materials, like the ghost nets, that represent our saltwater country for us.”

There are stories woven into the large cyanotype works. One is about bringing home the spirits of the Quandamooka dilly bags placed in museum collections, Elisa says, while another (seen at the far left of the photo at the top of this article) was inspired by the discovery of her great-great-grandmother’s marriage certificate, which shows she had to obtain permission to marry her European husband.

“We made that work because we wanted to give her a celebration, so it’s a seafood feast for her. It’s a big Quandamooka feast and the dilly bag’s there representing the female spirit.” 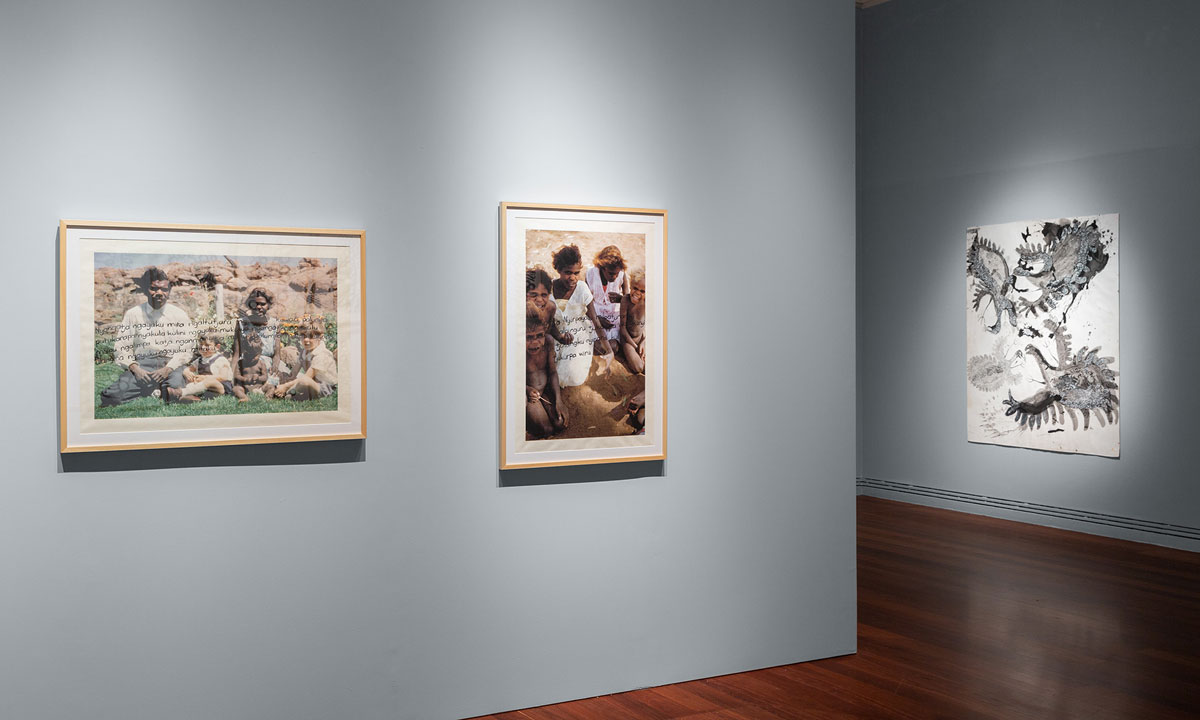 A series of works by Nyurpaya Kaika Burton titled My story, written in my own hand, comprises historical photographs which the artist has enlarged. On top, in her own handwriting, she shares stories and memories of her life and loved ones.

Photography of a different style can be seen in Queensland artist Naomi Hobson’s Adolescent Wonderland series of digital prints, which combine monochrome and colour to striking effect. The images were all taken in her community of Coen, on the Cape York Peninsula.

Hobson’s prints each have descriptive titles, such as “She told Mum she was taking me for a ride down the road but she not” (Road Play), and “I love this! think I’ll wear it to Puchaanu’s birthday party coming up soon” (The Birthday Skirt). 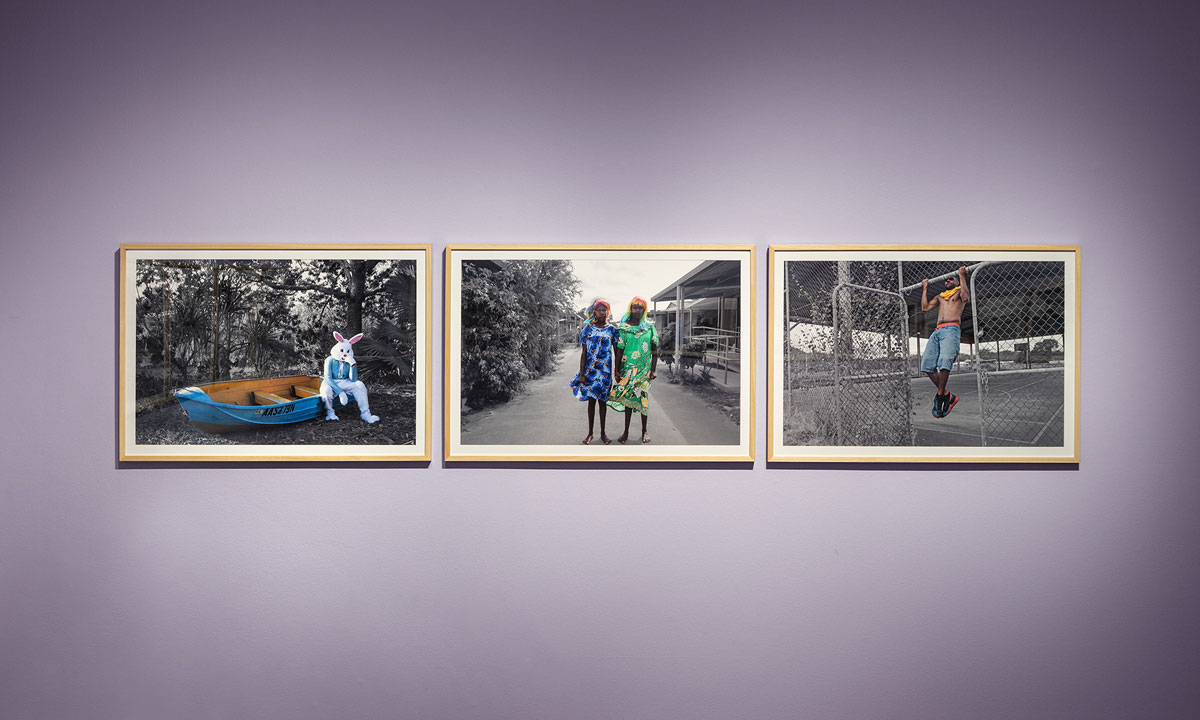 “There are about 360 people that live in the community and she has worked with them to showcase really fantastic photographs of them as they are,” Nici Cumpston says.

“With each of the titles of the works you get an in to who they are and their relationship with each other… It’s very unique to be given such an insight into an Aboriginal community.”

Also particularly evocative is the installation of work by mother and daughter duo Lena Yarinkura and Yolanda Rostron, from Central Arnhem Land. It comprises elaborate sculptures woven from natural materials that honour Ngalbenbe (the sun story), with works depicting aspects of fishing and ceremonies celebrating a good catch. 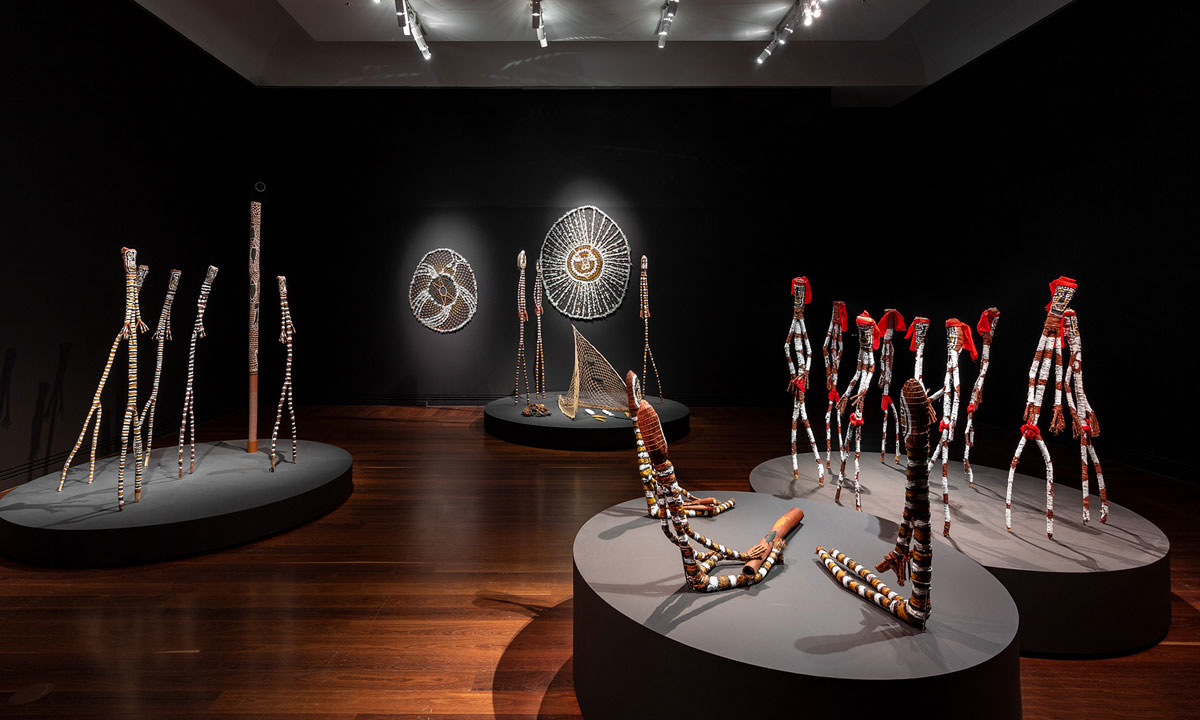 “This is a big story made with all natural materials – we have pandanus, paperbark, natural ochre – and each individual component has been woven and hand-sculpted by Lena and her daughter Yolanda,” Cumpston says.

She adds that the installation is accompanied by a ceremonial song for Ngalbenbe: “So you get the full sense of the celebration and the opportunity for catching the big catch of fish.” 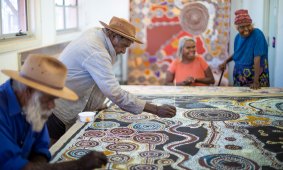 Brittany spears: Art from the APY Lands heads to France

Over the past five years, Tarnanthi has showcased the work of almost 4000 Aboriginal and Torres Strait Islander artists, with the Art Gallery of SA saying around 1.3 million people have attended the exhibitions and events.

AGSA director Rhana Devenport describes it as a flagship project for the gallery.

“This year, Open Hands celebrates knowledge-sharing and healing across generations, primarily by women,” she says. “It is a joyous exploration of the act of making.”

For the first time, Tarnanthi also has an international offering in 2020, with Kulata Tjuta ­– a major exhibition of new works by artists from the APY Lands – opening today at the Musée des Beaux-Arts in Rennes, France.

Opens Hands is at the AGSA until January 31 next year, and the annual Tarnanthi Art Fair, usually held alongside the exhibition, will take place from December 4-6 this year.

A selection of the works featured in Open Hands: 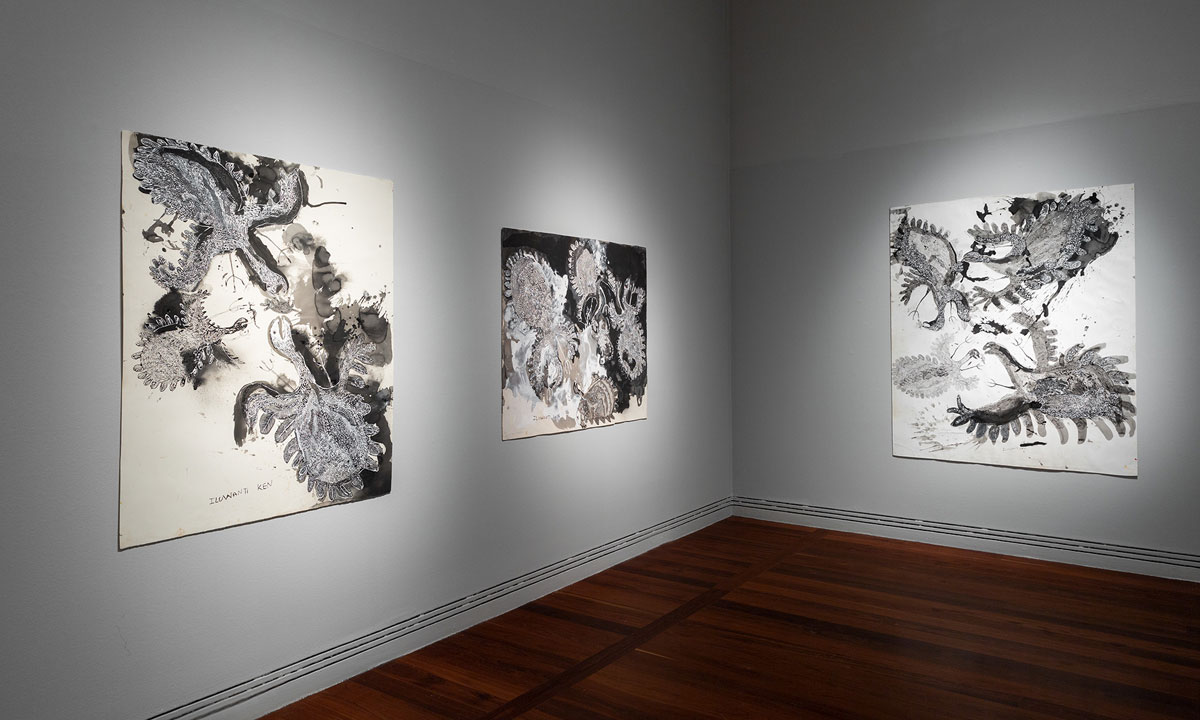 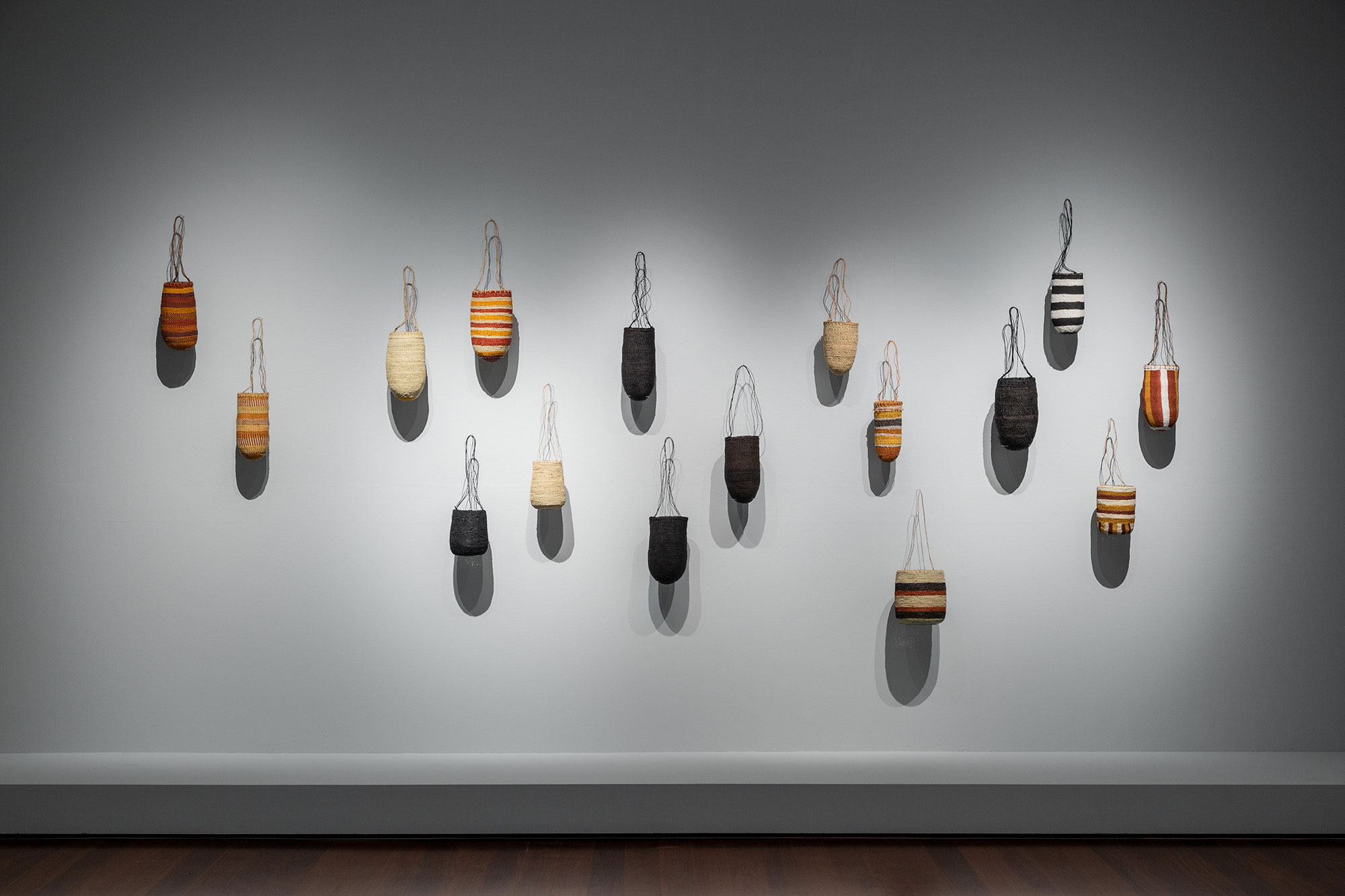 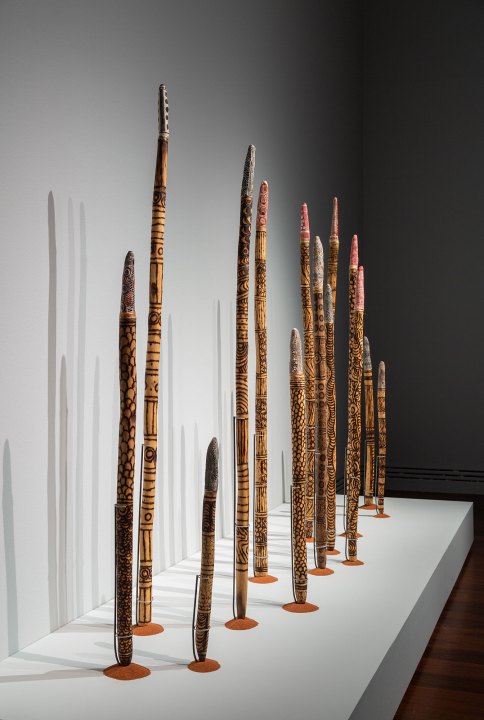 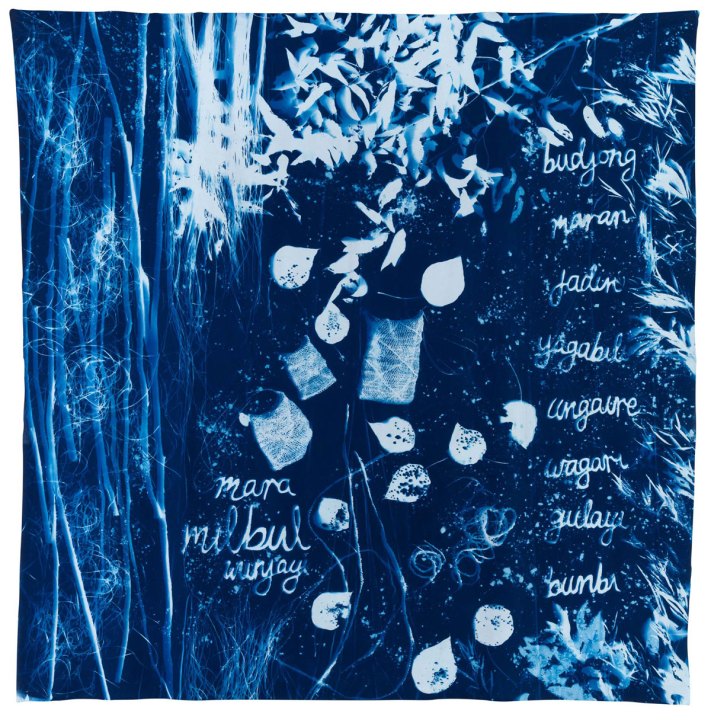 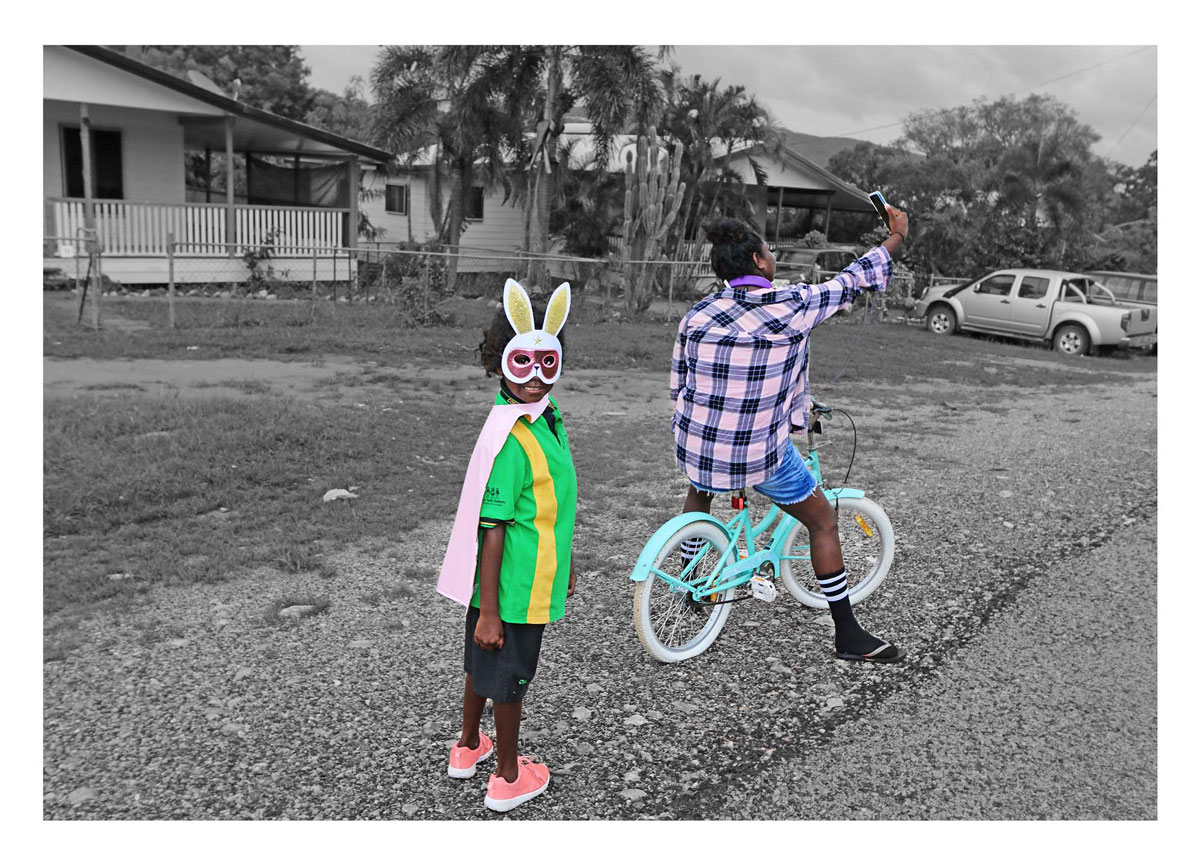 Naomi Hobson’s Road Play – “She told Mum she was taking me for a ride down the road but she not”, Laine. From the series Adolescent Wonderland, 2019, Coen, Queensland; digital print on paper; courtesy the artist and Redot Fine Art Gallery. 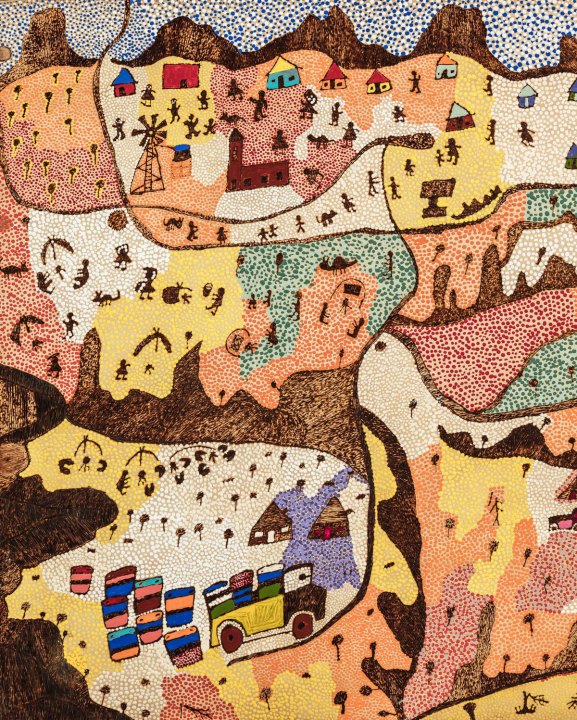