Over the past five series of Back Roads, Heather Ewart has visited many SA places – from Oodnadatta to the Coorong – but it all started in 2015 with a trip to what was described as “the Nullarbor frontier town of Ceduna … where breaking conventions is the rule”.

Back then, she says, the programmers at the ABC’s head office in Sydney weren’t overly optimistic about the prospects for a show that would take viewers inside rural and regional communities all over Australia.

However, Ewart, a former overseas correspondent and political journalist, grew up in country Victoria and knew there was a wealth of interesting characters and stories to be uncovered.

“I was sick of country people being stereotyped as hicks or whinging farmers, so we wanted something more positive to showcase country people and their resilience,” she says.

Her instincts about viewers’ appetite for such stories proved correct. That first episode from Ceduna attracted more than a million people, and the ensuing series have continued to rate strongly.

Back Roads returns to the ABC on June 8, and it’s serendipitous that the first episode of the sixth series begins less than an hour’s drive from Ceduna, in the South Australian small town of Penong. It’s a place Ewart first visited while filming the inaugural episode, when it was recommended she take a side trip to the nearby famous surf spot of Cactus Beach.

Penong – a farming community famous for its dozens of windmills – is the starting point of a 1300km, two-part Back Roads journey along the Nullarbor Plain that ends in the Western Australia town of Norseman.

Along the way, Ewart visits Australia’s largest gypsum mine (at Lake MacDonnell), meets a truckie who’s spent three decades driving the highway, drops into the Nullarbor Roadhouse – “roadhouses are like little towns all of their own because there’s so much movement going on” – goes whale watching with a couple who run boat tours from Fowlers Bay, and flies over the Great Australian Bight at sunrise with “South Australia’s only female chief pilot”, Felicity Brown.

“It’s not for everyone, living in these remote areas, but they really love it – it’s something they’ve embraced and I loved hearing their stories,” Ewart says of the people she met along the way.

“What we were trying to show, and I think we’ve done that successfully, is that there’s a lot to see along the Nullarbor if you take the time.”

One of the quirky attractions highlighted on Back Roads is the Nullarbor Links Golf Course – aka “the longest golf course in the world” – which spans 1365km from Ceduna to Kalgoorlie in WA, with holes in towns and at roadhouses all along the Eyre Highway.

Ewart, who’s no golfer, didn’t have a hit herself. However, she did try her hand at making bush medicine from desert plants with Anangu elder Mima Smart while visiting the Yalata Indigenous community.

“Mima reckons it can cure anything… it’s called the wondrous potion.” 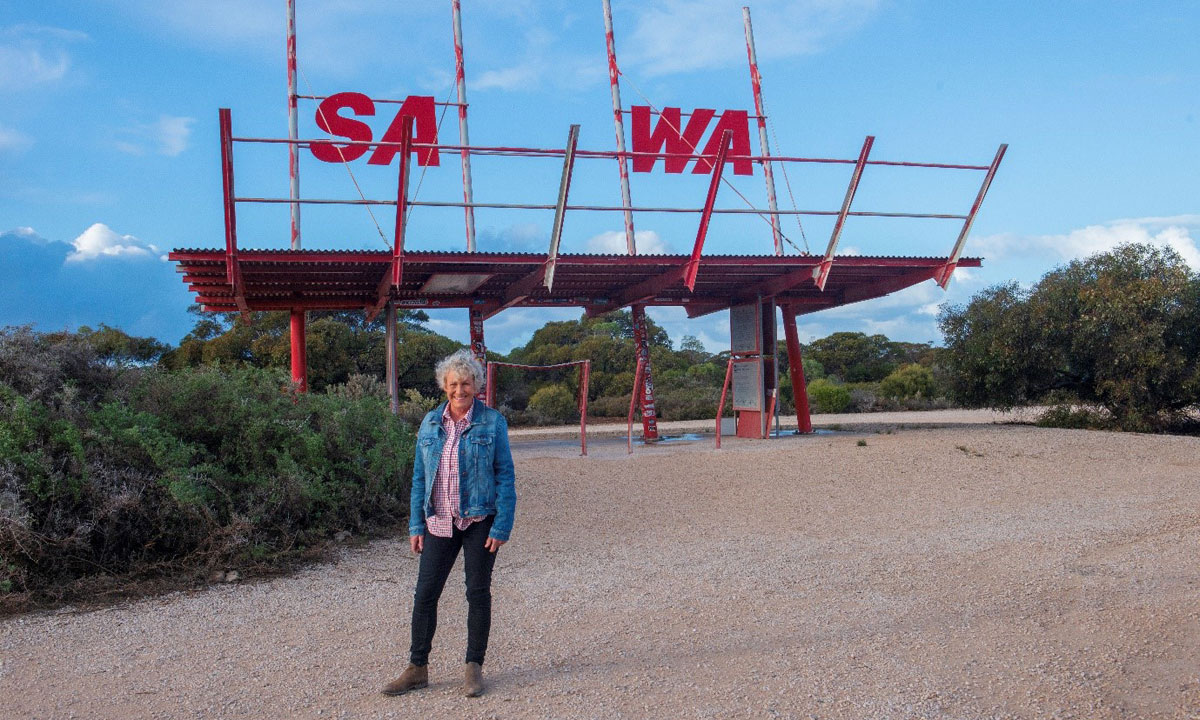 Along with people living on the Nullarbor, the Back Roads team met several travellers on their own odyssey along the highway – including a horse rider who started her journey in Victoria, a cyclist, and even “one brave soul attempting it on foot”.

“I was absolutely gobsmacked by that because I had no idea they [the quarantine inspectors] were so diligent about checking every car and caravan  and truck,” Ewart says.

“There are all these drawers of different things that have been confiscated by the inspectors. For people who are going to be driving back the same way they will actually keep things [the non-perishable items] for them to collect on their way back.”

Series six of Back Roads was filmed over six months, with the final episode – in Girgarre, in Victoria’s Goulburn Valley – wrapping up only around a week before the COVID-19 lockdown began.

Ewart says the show requires a long lead time because the crew can spend up to 10 days in the towns they visit. This gives them time to get to know the place, while the locals also become more relaxed and willing to speak frankly about their lives.

She believes one of the reasons Back Roads resonates with audiences is because of how the stories illustrate a strong sense of community – something that is often missing in cities.

“It’s succeeded beyond our wildest dreams,” she says of the series.

“I hope it can continue because it’s important for me and those who work on the show to be able to give country people a voice on mainstream TV.”

Series six of Back Roads starts at 8pm on Monday, June 8, on ABC and ABC iView. Past seasons are also available on iView.